What is there, really, to say about this episode but, “Awwwwwwwwwww…”? I mean, those kids! Their parents! Adorable. Tearz. Real waterworks.

Well, let’s start from the top. And by “the top,” I mean, “the part where Ruth, James, and Francis risk their careers by cooking on the TeeVee.” Fun fact: The three of us did actually sit outside the kitchen before the challenge, saying things like, “No, really, I think this could ruin my career.” We were talking about our food careers, of course—fairly or not, who can respect a critic who cooks like a buffoon?—but considering Ruth was putting on her best French Maid-by-way-of-Greenwich-Village accent, James was trying to sound like an Oklahoma belle, and I dug back into my childhood to find my Deep Jersey Doofus (“Ay, yo, chef!”), our acting careers were certainly going to be smothered in their cradles. 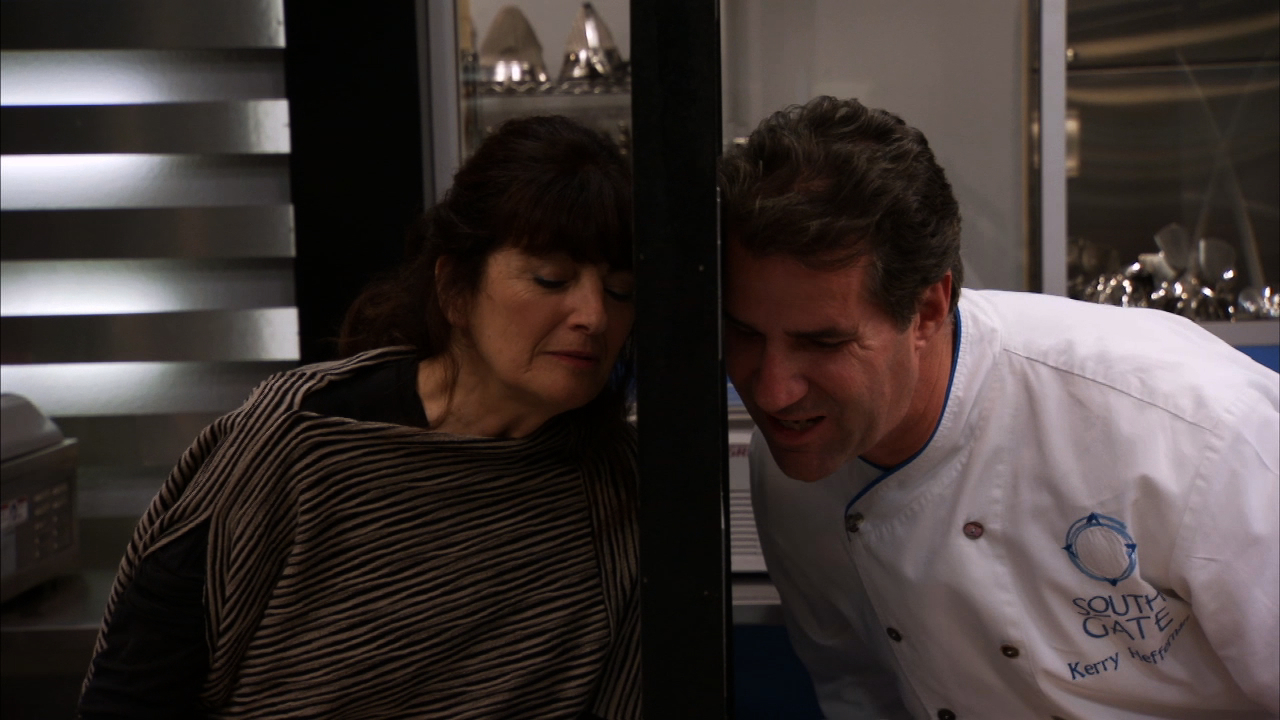 And it turned out that we didn’t need to disguise our voices anyway, since the awesome hum of the ventilation fans, the desperate clacking of knives and clanging of pots made it almost impossible for the chefs and their remote-controlled cooking droids—that’s us—to hear each other anyway. By the time I heard Lorena tell me to put water on for pasta, Elvis had already left the building with a gaggle of groupies. But still, we at least crushed the sauce part of the dish. Big laughs, big hugs, mad respect, and let’s never do that again. Ok, I’d do that again. Next time, we’ll use cilantro, Lorena!Then the Elimination Challenge. I love that Lorena kept saying that this was her favorite challenge, because it was mine, too. Sure, it seems a little cruel that the challenge that determines whether a chef will go on to the finale forbids them from actually cooking the food, but as they all said, the real job of these chefs in their restaurants is to communicate a vision, teach skills, and let someone else make it happen on the plate. In an important way, this challenge really was the most true-to-life practice of what it means to be a chef.

And the student-cooks were just adorable. No! Sorry! Let’s not talk about that, because I don’t want their cuteness to overshadow their skills, their work, and, most importantly, their desire to learn. At the table, we talked with the chefs and the students and their families. It was incredibly moving how proud of themselves the students were, and how proud their families were of them. And how, in many instances, these kids came from families that are in tough situations, and how much they believe in their dignity and hard work.

I loved watching the episode and getting some sense of how they were working and learning under Chris, Lorena, and Kerry. How the chefs all had different styles and priorities—Chris in connecting the students to the life and truth of what they’re cooking; Lorena in showing her team how to concentrate and bring out flavor in what they already knew; Kerry in challenging his students to work faster, harder, and yet still in a more refined way than they might have known they could. Not one chef showed any hint of resentment that their fate wasn’t directly in their hands. They all did what truly great chefs do: they taught, they mentored, they risked their reputation by trusting in others, and they took pride in that.