Thank you to Francis Lam for providing me with the perfect title for this week's recap.

Welcome back my little Pad See Ew. In case you were wondering, that's my go-to Thai food order. But before we get to the spicy (in more ways than one) Elmination Challenge, let's start with the Quickfire Challenge with guest judge Dita Von Teese. How appropriate for Dita to judge a challenge all about aphrodisiacs. While there isn't a whole lot of proof that aphrodisiacs do what we think they do -- besides, you know, Love Potion No. 9 -- it's inevitable that if you're eating an oyster, you're wondering what it might, um, help with. While doing some research for this week's interactive episode (hope you guys are watching those!) i discovered that oysters are a good source of zinc, which apparently does help control progesterone levels, so there's that. This may be blasphemous to say but I only starting enjoying oysters recently, and I would have been all over Takashi's winning Quickfire dish. Truffle and yuzu? I'm there. For the challenge, the chefs were provided with the "aphrodisiac" ingredients, but that doesn't mean their dishes stiil didn't have to bring the sexy. I really can't think of a "sexy" dish off the top of my head, but I would say there's something sexy about a dish with a lot of technique in it. Y'know, something that requires micro this or that to be placed gently on top of it with tweezers. Just knowing that a lot of thought went into a dish is sexy to me. But, y'know, I'm a dork. This same theory applies to cocktails for me, by the way. And without my odd predilections for over-thought food in their minds, the chefs put their best erotic feet forward, but Takashi came out victorious with his oysters and uni. Uni is probably one of the most luscious and luxurious ingredients out there, so it all makes sense. Meanwhile, just tried the spaghetti at Marea with uni -- wow. Before I wrap up this TMI recap of the Quickfire Challenge, can we just talk a moment about Curtis' fumbling around Dita? He got so flustered! I mean, he gets like that around me too, but I'm me! Hope Lindsay wasn't watching!

Preview
The Queen of Burlesque 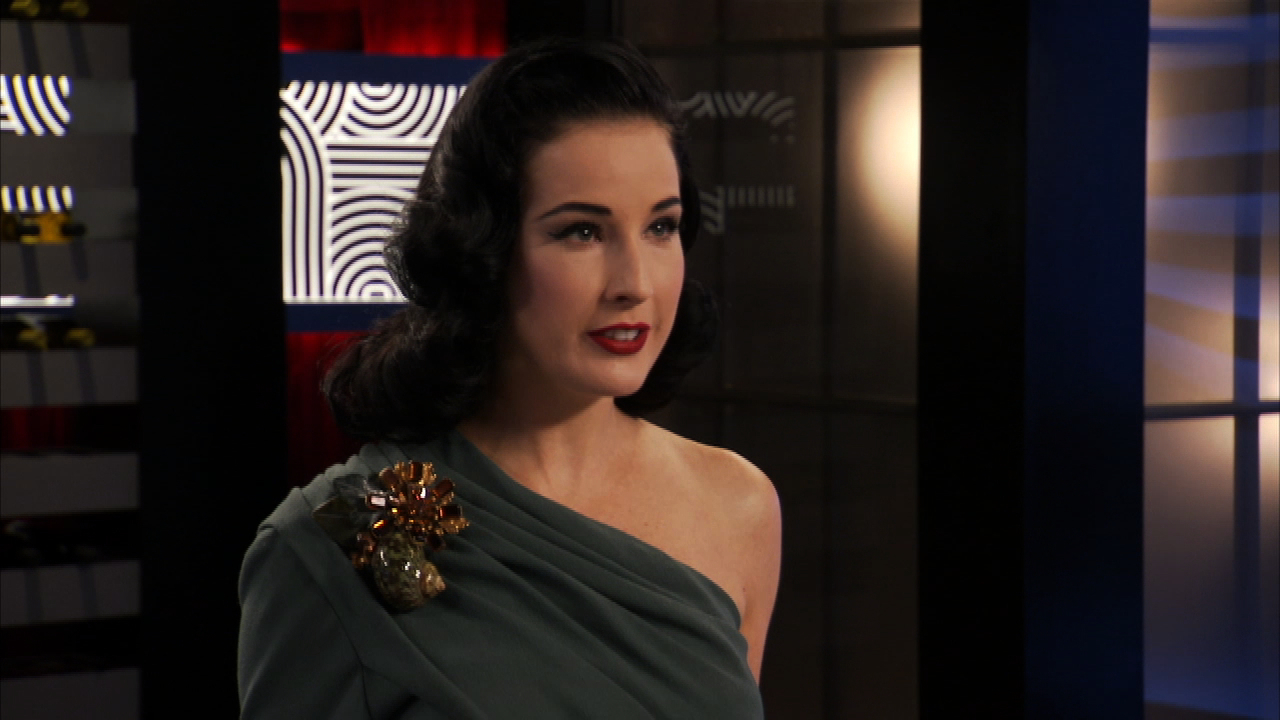 On to the real beef -- again, in more ways than one -- of this episode, the Elimination Challenge. The chefs had to put together a Thai restaurant in a day. They were hauled to Lotus of Siam to see how it should be done. I've heard of Lotus of Siam and Curtis teased it when he visited Bravo HQ earlier this season, but i have to say, looking at all that Thaui food was making me drool. Unfortunately, I don't love the Thai food offerings in my area and my favorite place doesn't deliver to me! I will take this opportunity to make a small plug for a small restaurant owned by one of my best friends -- White Orchids in the Lehigh Valley in Pennsylvania. Tell them Monica sent you! Or don't because they might say, "Monica who?!" Also, be sure to order the money bags. They're not only my favorite, but they're fun to say. But I digress.

Anyway, some of the chefs were really worried because Thai food was so far out of their comfort zones, but they all rose to the challenge. Whlie Art and Lorena were sent to front of house, which honestly, was a good decision -- they are the most personable -- the other chefs were "line cooks." But before the guests even got there, the drama started. Although the tension between Lorena and Patricia had been brewing for awhile, it came to a head when Patricia yelled at Lorena for taking up too much stove space. "Please, Patricia, chill!" I've literally been saying that to everyone that will listen. "Please, Charlie, chill!" "Please, Stacy, chill!" Aren't you glad you don't work with me?! I have to say I could see this argument happening in any kitchen, but Patricia did seem kind of condescending. She's obviously just reached the end of her rope. But Lorena put on a happy face and greeted her guests with a smile, including the judges who were not only joined by Lotus of Siam chef, Saipin, but also her daughter/interpreter, and Alan Sytsma of Grub Street.   First, Lorena's dish. I honestly thought it looked ilke chicken/matzah ball soup before the fat's been skinned off the top. Too harsh? But, it was Pisco chicken! And honestly it just made me want a Pisco Punch from Pegu Club, one of my favorite drinks. So for that alone, Lorena gets my kudos. Chris attempted a larb tartare and won! Way to go, Chris! He was truly inspired by Saipin's food and you could tell... unless he calls everything he eats "intoxicting," which is entirely possible. I don't know him. Takashi was safe with curry and crispy noodles. Kerry made a a braised pork belly which was praised by Saipin for seemingly being the most authentic of all the dishes. And although Patricia's dish apparently would have been great had she cooked her duck long enough, she didn't. In fact, her duck was sent back by James. There are actually few things grosser than duck fat that hasn't been rendered correctly. Yuck. But it was Kerry's fault -- according to Patricia. I don't totaly buy that. Communication is a two-way street, or something less cliche. Then there was Art, who just didn't step outside his comfort zone enough to provide a truly Thai dish, and so he went home. We'll miss you, Art! And your Speedo! I hope you're serious about opening a restaurant with Lorena because I can't imagine a restaurant with bolder flavors or personalities!

Next week, Sugar Ray (the boxer not the band!) visits Top Chef Masters. Until then, Have a Nosh, and Learn to Fly.