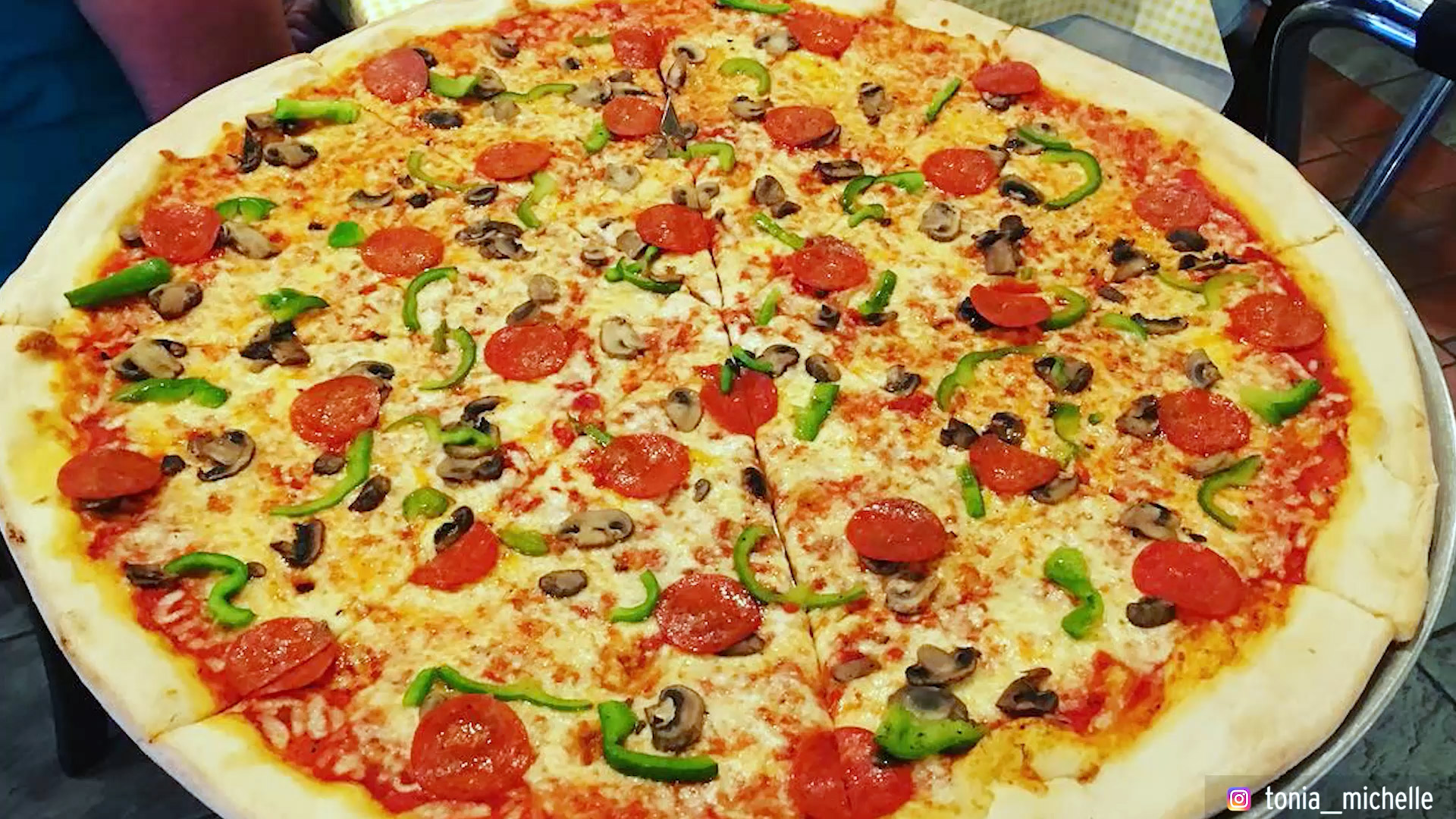 Wedged between the cosmopolitan metropolis of New York City and the historical burg of Philadelphia, the state of New Jersey is often regarded as its own little version of flyover (or maybe drive-through) territory. But as any native like me can tell you, the Garden State is definitely worth a pit stop, at least for the foods you won't get anywhere else. Here’s a rundown of the only-in-Jersey culinary finds that can be yours for the sampling just off the Turnpike.

1. Kohr’s frozen custard on the boardwalk

Unlike lots of places in the Midwest, the Garden State’s not necessarily known for its frozen custard—unless, that is, you’re vacationing “down the shore,” where numerous Kohr’s stands await you along New Jersey’s world-famous boardwalk. With their high-fat content and super-creamy flavors, the soft custards and hard ice creams at Kohr’s taste as delicious as summer feels.

They’re not Manwiches! New Jersey's version of the sloppy joe, which originated in the 1930s at the still-operating Town Hall Deli in South Orange, is a double-decker neatly stacked with at least two types of cold cuts, cheese and cole slaw, smeared with Russian dressing and served on specially made rye bread.

The processed-meat pride of New Jersey—most commonly eaten fried or grilled as part of an egg-and-cheese breakfast sandwich—this minced ham product (that’s sort of like bologna) is known as Taylor ham in the northern part of the state and pork roll down south. But this spring the naming controversy has gotten so heated, it's led to two competing bills in the state Legislature—and even President Obama and Bill Clinton have weighed in (delicately).

Anyone who went to Rutgers (a.k.a. The State University of New Jersey) has ended a drunken night out at the cluster of on-campus food trucks colloquially called “grease trucks,” where they probably ordered a…

An invention of Rutgers’ aforementioned grease trucks, fat sandwiches are basically a type of Frankenfood in which typical side-order items like fries, onion rings or mozzarella sticks are stuffed right in between the same two buns as your burger patties, chicken fingers, gyro meat, and so on.

New Jersey knows how to do hot dogs. This version is a deep-fried frank served on a roll (not a bun) stuffed with peppers, potatoes and onions. It was invented in Newark at a classic hot-dog stand called Jimmy Buff’s; the original’s now closed, but two other Jimmy Buff’s still exist in nearby West Orange and Kenilworth.

Believe it or not, Texas weiners are a Jersey original. The Lone Star state reference is due to the dogs’ chili sauce, which is usually slathered on top along with a heaping helping of chili. You can get ‘em at places like J&G Texas Weiners.

While “hard rolls” (a.k.a. Kaiser rolls) are easily found in most parts of the country, especially nearby New York, Jerseyans will tell you that there’s just something unparalleled about hard rolls, Italian breads and other carb-tastic treats from their home state, especially from bakeries like Calandra’s, which has been around since 1962.

Yet another type of hot dog, a ripper is cooked using a unique deep-frying method that occasionally “rips” their casings. (Hence the name!) They’re also topped in a one-of-a-kind blend of spices and mustard. Pretty much the only place to get them is at Rutt’s Hut, where they were invented.

Diners are another culinary institution that may not be entirely unique to New Jersey, but that New Jerseyans tend to cherish like no other. Some are practically living landmarks, like White Diamond in Clark, Mastoris in Bordentown, and the Americana in East Windsor.

Made in the Garden State for decades—the company, founded by a Paterson pharmacist in 1891, only recently moved to the Big Apple—Boylan’s old-fashioned sodas come in flavors like black cherry, root beer and creamy red birch beer.

Another Jersey-made beverage product, Boost! has gone by a few names since it was invented by Riverside pharmacist Benjamin Rice Faunce in the early 1900s. While the obvious thing to do with Boost is to mix it with seltzer for a proper soft drink, fans of the product also really enjoy using it for slushies. The syrup is still sold in jugs at stores throughout south Jersey, as well as online.

While salt water taffy’s ingredients do include water and salt, there’s no actual ocean brine to be found in this sticky, chewy candy invented in Atlantic City. Still, few New Jerseyans can imagine a shore getaway without stopping at one of the many salt water taffy stores still in operation throughout south Jersey—many of which, like Shriver’s, also churn out unforgettable fudge.

A deli sandwich on a long, narrow roll was not necessarily invented in New Jersey, but what to call such a sandwich is a distinctly Jerseyan debate. Like Taylor ham vs. pork roll, northerners in the state seem to side with “sub,” while those in south Jersey prefer “hoagie.” One thing all of Jersey can agree on: It’s not a damn “grinder.” This ain’t New England, buddy!

This landmark pizza joint has been slinging unbeatable, super-thin-crust pies in a family-friendly, dive-bar atmosphere for almost 70 years. Walk in and you may see a kids’ birthday party taking place right next to some old geezers watching the game. If you grew up going to Star Tavern, it’s definitely because your parents—and maybe even your grandparents—did, too.

Many New Jerseyans can tell you a funny story about that one time they dared to venture outside their home state and suggested ordering a pie, causing a bunch of non-Jerseyans to wonder why they were talking about dessert when they hadn’t had dinner yet. Also noteworthy: pizza pies are not exactly the same thing as…

Also known as “Trenton tomato pie” for its city of origin, a tomato pie is like a thin-crust pizza where the layer of stringy mozzarella topping lives underneath the tomato sauce. You can still find them at plenty of Trenton-area tomato pie joints like De Lorenzo’s, in business since 1947.

New Jersey’s Italian-American population speaks like nobody else on Earth—including actual Italians, who often have no idea what they’re saying when they talk about foods like capicola (which Jersey Italians pronounce “gabba-GOOL”), ricotta (“rah-GOAT”) and manicotti (“manna-GOT”). Capish?

New Jersey gets a bum rap as the armpit of America, when in truth, its nickname is the Garden State for a reason! Come summer, locals love gorging on Jersey corn, peaches and tomatoes. Mom probably served you the latter on tomato and mayonnaise (sorry: “Man-azze”) sandwiches.

This erstwhile chain of ice cream parlors in northern New Jersey was beloved for its hot fudge and wet walnut toppings, plus luncheonette-style meals and resplendent decor (red leather banquettes, anyone?). You can still find the fudge sauce online under the name Original 1910 Chocolate Fudge Sauce, made from the Gruning’s recipe.

The Feast is Bravo’s home for the biggest, boldest, and most crave-worthy eating experiences. Want more? Then Like us on Facebook to stay connected to our daily updates.

15 Foods You Grew Up Eating If You're from New England

7 Tips for Ordering from a Menu Like a Real Southerner