Nadine and Erik
The couple celebrates their first steps as man and wife.

Bravotv.com: Tell us about the proposal! We want all the deets!

Erik Courtney : Nadine is a huge Pearl Jam fan and I wanted the proposal to be personal and meaningful. We were planning a trip to France, so I contacted a composer friend who arranged her favorite Pearl Jam song on strings. Then I found some musicians in Paris and they learned the song. On our second day there, we met up with a mutual friend who pretended she was going to take us on a walking tour of the Ile Saint-Louis. We walked under a bridge over the Seine, where the musicians were waiting. It had just started to rain, and as we walked up and saw the musicians, Nadine still had no idea what was happening. She was like, "Wow, musicians are just hanging out under a bridge in the rain? So French!" It wasn't until I went up to the musicians, asked in French (which I don't speak!) if they knew her favorite Pearl Jam song, and then they started to play it on guitar and violin that she realized I was asking her to marry me. We danced and kissed while they played, and then once they were done, I dropped to one knee and proposed.

Nadine Jolie Courtney:  The proposal was so romantic and so perfect because it was completely me! I studied abroad in Paris and it's one of my favorite cities, for a million obvious reasons. Our relationship had been going at lightning speed and I'd already taken him home to Atlanta to meet my dad and ask for permission, so it wasn't like the proposal came from nowhere -- but I had no idea when, where, or how he'd do it. We met up with my friend Melanie, who is an actress and played her part perfectly: I was completely in the dark and just thought she was giving us a little Parisian walking tour! When we came upon the bridge, there were these two guys sitting on a bench with their music cases next to them. It had literally just started to rain and so I kind of groaned and said, "Oh my god, seriously, those musicians are just hanging out on a bench by the Seine? That is SO French," having no idea. Erik said he wanted them to take our picture, so he approached them, and then after they snapped a photo he asked if they knew how to play 'Yellow Ledbetter.' I was confused for a split second and was looking back and forth between Erik, the musicians, and Melanie in disbelief. It wasn't until Melanie started grinning and nodding and whipped the camera out that I realized this was the moment! Erik and I danced by the Seine to my favorite song in the rain. It was pure magic.

EC: My voice gave out, so I was nervous I wouldn't be able to talk! I also worried about my mother; because I wanted to make sure she had a good time. Nadine kept reassuring me that she didn't need babysitting, and my mother had the best time in the end, but I can't help it. I'm an overprotective son! As far as nerves about the wedding itself, I had none. Wild horses couldn't have kept me from that altar. I was so excited to see her walk down the aisle, and was excited for the reception. Some friends gave us great advice: they told us to steal a few moments here and there for ourselves, since the night goes by so quickly. We did, and I think we made the most of what was already a perfect night.

NJC: Hands down, I was most nervous about meeting Erik's mom Sister Brigid. It's not every day that you meet a nun, and I wasn't quite sure what to talk to her about. (Our conversation was definitely a little awkward at first!) I just wanted her to like me and to make Erik feel proud. Luckily, she is the sweetest woman on the planet and she's pretty much a dream mother-in-law. I was sad on the big day not having my own mother Nancy by my side, but I felt like she was there with me in spirit. I was also nervous about the little things: would I trip walking down the aisle? Would I get totally overwhelmed with emotion and smear mascara everywhere at the altar? (You dream of being that perfect, magazine-cover bride, but alas that's just not me!) I was especially freaked out that I might spill wine on my dress. We actually had a second wedding later in Dallas for my huge family (since my grandmother is too old to travel), and I was terrified of ruining the dress!! The ceremony went off without a hitch, though. Erik and I wrote our own vows, the sun was setting behind us right as we said "I do," and celebrating with all our friends was a blast. 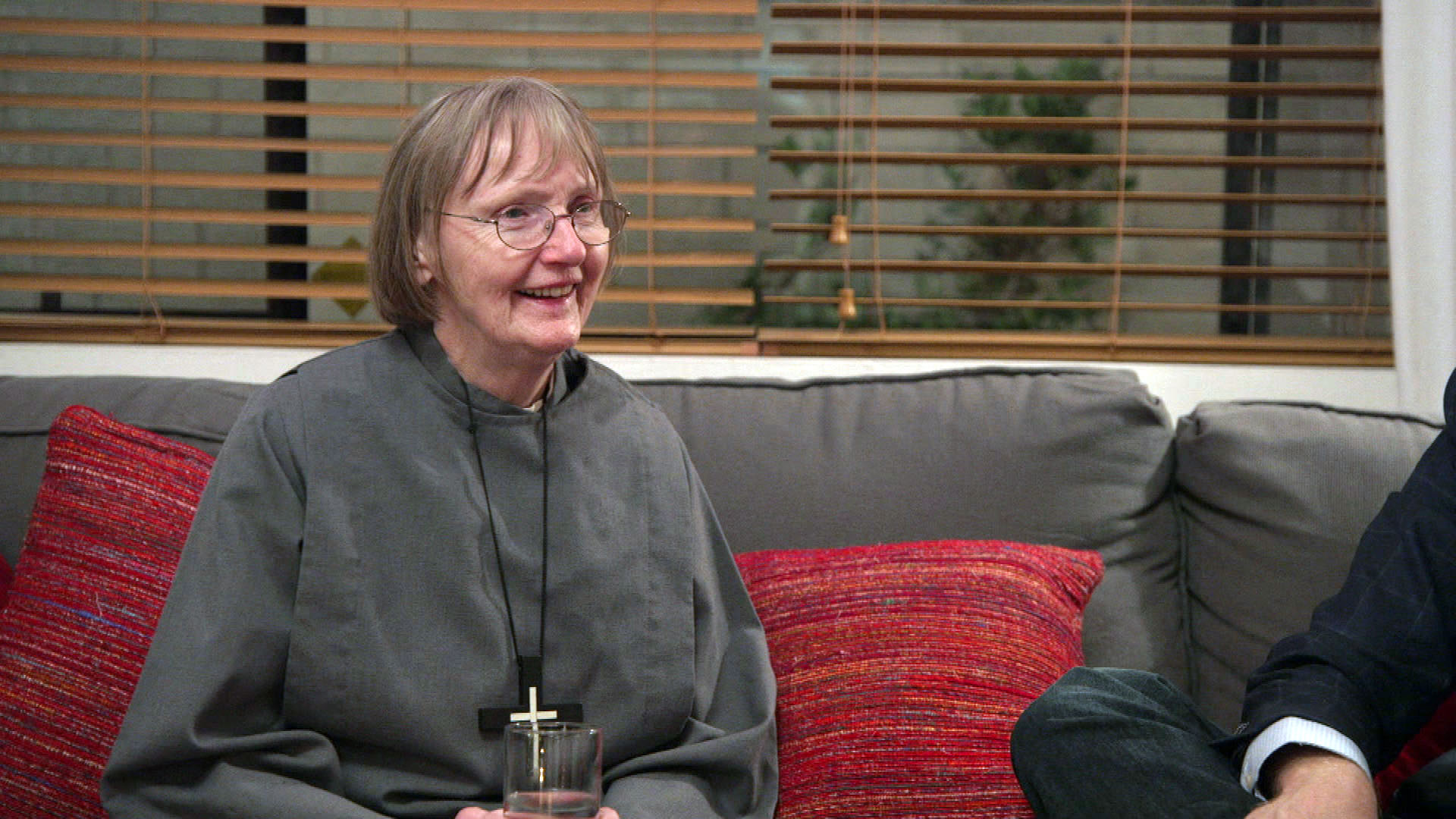 Bravotv.com: Looking back, what is your favorite memory of your wedding day?

EC: My favorite memory of the wedding day was seeing Nadine walk down the aisle. She looked so beautiful, but she also looked like herself.

NJC: My favorite wedding memory was when Erik and I did our first-look peek in the grounds behind the Montecito Country Club. Our bridesmaids and groomsmen were watching us from the second floor, and they whooped and hollered as Erik turned around and saw me. It was such a fun, silly, exciting moment.

Bravotv.com: What were you most looking forward to in married life?

EC: So much of the time that Nadine and I spent getting to know each other involved planning our wedding. After all, we were engaged only three months after we met. For me, the thing I was most excited about was actually getting to live my life with her. Spending our mornings grabbing breakfast and coffee and talking about politics. Watching Game of Thrones on Sunday. Having our first Christmas together. Celebrating our first Valentine's Day. I was so excited about the fact that I get to spend the rest of my life with her and that there's so much to look forward to. Nadine brings out the best in me. She makes me aspire to be a better man. I can't wait to see how we grow as a couple and the kinds of adventures we find ourselves having the first year of marriage--and beyond.

NJC: I couldn't wait to be Mrs. Courtney! It sounds so official and adult doesn't it? Literally six months before I met Erik, I had given up. I wrote a post on my blog about how I was probably never going to meet "the guy” and how I was going to start looking at my friends as my soulmates, because how could you possibly find one person who met all your needs? Then I met Erik, and he blew me out of the water from the word "go." It was like this guy had been put on earth JUST for me, and even better: he accepted me just as I am. I threw all my crazy at him from the moment I met, trying to show him the real me, warts and all. I was terrified that he'd be starry-eyed by that new-love glow, but that as soon as the stardust faded, he wouldn't want the reality: a neurotic, silly, stubborn, strong-minded girl who needs way too much sleep. But he loved me for ME, and that's why we were in such a rush to make it down the altar. When you've spent so much time meeting the wrong people, you instantly know it when the right one appears. It was like the world was in black in white, but when I met Erik, everything became color.

8 Most Shocking Moments From Newlyweds Season 3

Where Are They Now? Newlyweds The First Year Season 3

Which Newlyweds Couple Had the Toughest First Year?

Newlyweds Season 3: Where Are They Now?

Extended Scene: Rob and Ro Find out They're Pregnant!

Are #Newlyweds Adonis and Erica Calling it Quits?

How Tara Conquered Her Fear of Flying: Alcohol

Find Out What "Sugaring" is With Craig Ramsay and Brandon Liberati