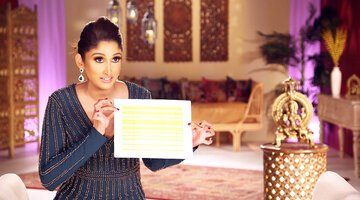 1:16
Preview
Anisha Ramakrishna Has Receipts of Vishal Parvani Blowing Up Her Phone 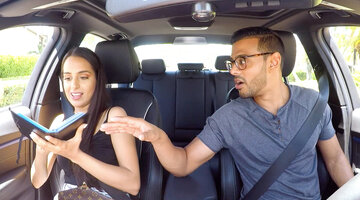 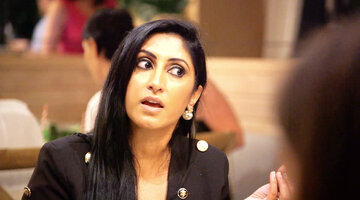 The friendship drama is off the charts on Family Karma this season. In particular, there seems to be some major conflict over who gets the title of Vishal Parvani's BFF.

While discussing the strain on his friendship with Anisha Ramakrishna earlier this season, Vishal confirmed that he is actually closer to his childhood best friend Amrit Kapai. "I love Anisha," Vishal said while out to dinner with his fiancée, Richa Sadana, Amrit, Bali Chainani, and her boyfriend, O'Malley (clip above). "Do I still think of her as a really close friend? I do."

However, when word got back to Anisha, let's just say she was none too pleased with either Vishal or Amrit. Another conversation between the guys and Bali during the Diwali Firetower celebration in the March 29 episode of Family Karma also didn't go so well.

Vishal reflected on his drama with Anisha during an interview with The Daily Dish in New York City on March 2, sharing that he just has a different kind of friendship with Amrit, due to the fact that they've been besties since they were kids and they're both guys.

"I think she understands that everyone's friendship is at a different level within any group of friends. And I think it's understandable, and I think she probably understands too, that Amrit has been my best friend, like, for the longest time, before I even spoke to girls," Vishal said of how he anticipated Anisha to react to his comments about their friendship when she watched this season of Family Karma. "Yeah, I'm super close with Anisha, but my level of closeness has always been with Amrit. Like, womb-to-the-tomb type of stuff."

We'll have to keep watching Family Karma Sundays at 9/8c to see how things turn out for this squad. However, we have found some resolution, thanks to Vishal.

During his self-quarantine after testing positive for coronavirus (COVID-19), Vishal decided to do a little Q&A with fans in his recent Instagram Story to pass the time. One fan asked Vishal, "Who really IS your best friend?"

And Vishal settled this burning question once and for all: "My socially awkward dog [Cheeni]."

The post featured a throwback photo of Vishal's little Pekingese, whom he shares with Richa, sitting on Santa Claus' lap from this past Christmas. We're including the original photo below, as well as some other adorable pics from Cheeni's very own Instagram account that make it crystal clear why she would be Vishal's true bestie.

Today’s my Birthday. Please do not disturb, and let me snooze. #peke #pekingese #dogsofinstagram #birthdaygirl

But Vishal also tagged both Amrit and Anisha in the post in his Instagram Story, which makes us think they're both really his BFFs, too.

You're not going to want to miss when Vishal and Anisha come face-to-face in an all-new episode of Family Karma on Sunday, April 5 at 9/8c. Watch a preview, below.

Life is better as an Insider
Bravo Insider is your VIP pass to never-before-seen content, exclusive giveaways, and so much more!
Sign Up for Free
All Posts About
Amrit Kapai
Anisha Ramakrishna
Bali Chainani
Vishal Parvani
Family Karma
Friendship
Bravo Relationships
Related