Sign Up for Free to View
Michael Darby: "Can We Cut Now, Please?"

1:38
Preview
Gizelle Bryant: "I Do Feel Horrible for Ashley" 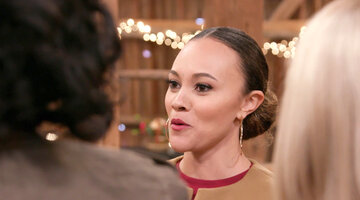 1:00
Preview
Ashley Darby: "Michael and I Have Been in Situations Where We've Been With Other People Before"

After hearing rumors about her husband, Michael Darby, through texts from one of Candiace Dillard Bassett's friends and alleged photos that surfaced online, Ashley Darby learned the truth about his night out in the September 20 episode of The Real Housewives of Potomac.

Ashley shared what happened when she confronted Michael after seeing the article that contained the alleged photos of her husband. "I called my husband, and I said, 'Get your ass home right now.' He walks through the door, sits down on the couch, and he tells me what happened," Ashley recalled during an interview in the episode. "I was very, very, very upset, and I realized that I don't want to be yelling with the baby being in the house. So that's why I wanted to sit down with him and really talk about it."

According to Ashley, Michael told her that he and the group of guys he was with had been socializing with some women at a strip club and later at a casino. One of the women asked if Michael wanted to go to a hotel. "Michael said, 'I was so drunk, I fell asleep, and when I woke up, she was laying in the bed next to me,'" Ashley said. "Then when Michael gets out of bed to check the time, she snapped a picture of him from behind at the dresser and gave it to a blog."

The RHOP couple discussed this during dinner in the episode. "I should have told you. I'm sorry I didn't tell you," Michael said to Ashley. "I worry what comes out without us discussing it, so I wanted to wait until you were back and talk about it."

Ashley told Michael that she felt like he had not given any thought to how this would affect her or their newborn son, Dean. "You did not think anything about me. I was so far from your mind in that moment. So far. And so was Dean," she said. "You weren't even considering either of us."

Michael admitted that he was being "inconsiderate" in this moment and said that, at the time, he felt like he and Ashley had "lost our intimacy."

Ashley emphasized to Michael that any future incidents like this would seriously jeopardize their marriage. "We're not gonna stay together just for Dean," she told Michael. "If I find out anything else, it will be catastrophic for our relationship."

The Potomac Housewives React to Alleged Photos of Michael Darby

Later, while out dress shopping for her sister Jessica's homecoming dance, Ashley's mom, Sheila, told her daughter that she was "very angry" at Michael after what happened. "Make sure this man knows there are consequences when you make these kind of mistakes," Sheila told Ashley in the episode.

Ashley told her mom that "this is one, two, and three strikes in one." "I'm not afraid to leave Michael. I want you to know that," Ashley shared. "I've left him before."

Sheila then told Ashley that she believes Michael "needs to learn how to move forward." Ashley assured her mom, "He does, and he knows this is it."

Ashley set the record straight on the rumors about her husband with her fellow Potomac Housewives during Gizelle Bryant's wine tasting later on in the episode. She also shared something new about her relationship with the ladies. "The reality is my marriage has had its own identity, we'll say," Ashley said. "Michael and I have been in situations where we've been with other people before."

Ashley then confirmed that she and Michael are in "a monogamous place," as Karen Huger put it, these days. "I don't want anything with anybody else," she said.

If she goes through anything like this again with Michael, Ashley told her friends, "We are done."

Ashley and Michael appear to be doing better than ever these days. The RHOP couple announced earlier this month that they are expecting their single child together this February.

See more from the latest episode of RHOP, below.

Gizelle Bryant: "I Do Feel Horrible for Ashley"
Life is better as an Insider
Bravo Insider is your VIP pass to never-before-seen content, exclusive giveaways, and so much more!
Sign Up for Free
All Posts About
Ashley Darby
Candiace Dillard Bassett
Gizelle Bryant
Karen Huger
The Real Housewives of Potomac
Bravo Relationships
Dean Darby
Michael Darby
Related

Candiace Addresses Who Sent Her the Michael Darby Texts