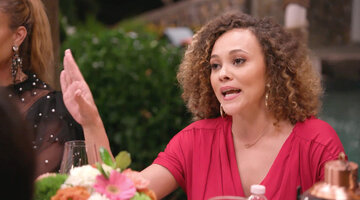 1:24
Preview
The Potomac 'Wives Try to Diffuse a Tense Situation Between Wendy Osefo and Ashley Darby 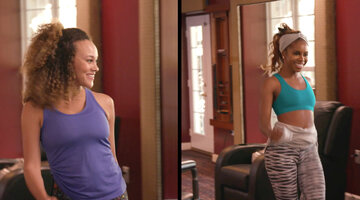 1:16
Preview
Welcome to the Lady of the River Competition 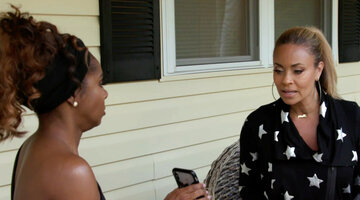 After receiving a text message containing some major allegations about Michael Darby (clip above), Candiace Dillard Bassett shared this information with Ashley Darby in the September 13 episode of The Real Housewives of Potomac.

Candiace, along with Gizelle Bryant, pulled Ashley aside during the girls' trip to Monique Samuels' lake house in Newburg, Maryland to share the text messages containing rumors about Michael, as well as a photo allegedly of her husband at a strip club. "As far as I know, everything is well," Ashley told her friends after seeing the texts. "I'm shocked."

However, Ashley revealed that she does her own checking in on her husband from time to time. "I don't just ask questions, Candiace," Ashley said. "I read emails, text messages, sniff underwear, everything."

Ashley ultimately assured Candiace and Gizelle that she would address these text messages with Michael. "So, I will take this information. I hear what you're saying. I will talk to my husband about it," Ashley shared. "I will get to the bottom of it, and I will see if there's some truth to it."

Later in the episode, Ashley noted how hearing about these rumors brought some stress to the relaxing getaway. "While I really would like to hang out with everybody, I'm feeling a little bit anxious," Ashley said in an interview. "Last year was a really trying time for my marriage, and this text message and these rumors, I don't want that to be a thing."

So Ashley looked forward to going back home and having a discussion with Michael. "I'm really excited to get home and address this rumor," she said. "I just need a little bit of reassurance from him that there's nothing to this. Get a good face-to-face confirmation."

Unfortunately, Ashley shared that her conversation with Michael didn't go exactly as she had hoped.

"When I got home from Monique's lake house, Michael and I talked about the issue that Candiace brought up, and he told me that he was at the strip club, and this one woman kept really touching him and was leaning on him and being very touchy-feely. He didn't tell me the full story; he just told me it was something that he regrets, that he shouldn't have done, that he feels bad for," Ashley recalled of their talk. "I was very, very, very upset. It got very heated. So, we stopped and Michael slept in the baby's room, and I slept in the bedroom."

Not long after their discussion, new photos allegedly of Michael from the night in question emerged online, and Ashley's fellow Potomac Housewives shared their reaction in the episode. Monique also called for some empathy, especially when it came to Ashley and Michael's child. "In the big scheme of it all, the only person that matters right now is baby Dean," she said in an interview during the episode.

While speaking about the photos to Gizelle over the phone, Candiace said, "Like, she needs to know what people are saying about her whole family! It's her family!"

And with that, Gizelle simply said, "Oh, Michael Darby, I cannot."

These days, Ashley and Michael are celebrating some happy news. The RHOP couple recently announced that they are expecting their second child together. "In the pregnancy peace bubble and loving it," Ashley shared in a post on Instagram on September 9.

Gizelle Bryant: "I Do Feel Horrible for Ashley"
Life is better as an Insider
Bravo Insider is your VIP pass to never-before-seen content, exclusive giveaways, and so much more!
Sign Up for Free
All Posts About
Ashley Darby
Candiace Dillard Bassett
Gizelle Bryant
Monique Samuels
The Real Housewives of Potomac
Bravo Relationships
Dean Darby
Michael Darby
Related