Sign Up for Free to View
Can James Hough Deliver on Elizabeth Frankini's 30th Birthday Expectations? 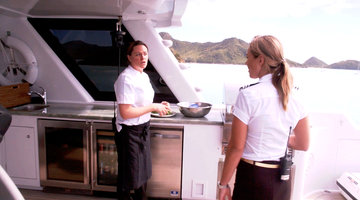 0:42
Preview
Emotions Run High For Captain Lee Rosbach and Charter Guests Who Belong to a "Club [They] Don't Want to Be In" 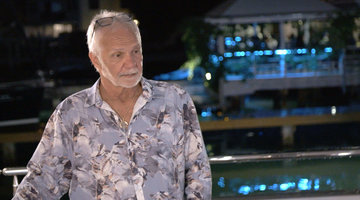 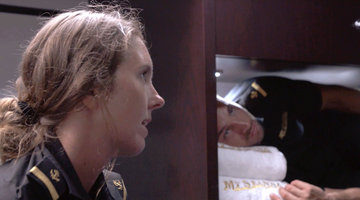 Elizabeth Frankini's 30th birthday in the February 1 episode of Below Deck wasn't exactly the celebration she had hoped for. In the wake of a major blow-up with chief stew Francesca Rubi over staying in a guest cabin and with no gift from her love interest James Hough, Elizabeth could basically file this one under "worst birthday ever."

But leave it to that episode's group of charter guests featuring primary Jackie Siegel, who is also known as "The Queen of Versailles" and appeared in the 2012 documentary of the same name, to help turn things around for the stew.

Elizabeth revealed in a post on Instagram on February 1 that Jackie and the other charter guests helped make her birthday special during their time on Below Deck.

"It was truly an honor to meet @therealqueenofversailles herself - Jackie Siegel - as well as her dear husband, family and friends on this upcoming charter of #BelowDeck. They were all such sweet, warm and genuine souls," Elizabeth captioned a photo of herself and Jackie during the charter. "I have a fond memory of Jackie handing me a birthday card right before they all sang to celebrate me at the table. I was under a lot of seen (or unseen) pressure that day, more than your average busy charter day, and their unexpected gesture of kindness really meant a lot. In such a cutthroat industry, the elements of humanity and appreciation can really go a long way in someone’s life. You never know what one is struggling with..."

The stew also recalled reading a part of Victoria's Voice, a book that Jackie and her husband, David Siegel, published featuring their daughter Victoria's diary after she passed away from a drug overdose at the age of 18 in 2015, which the parents opened up about to Captain Lee Rosbach during the episode. "As someone who has kept a journal their entire life, I was practically in tears realizing how much of my former self I saw in that creative and introspective, beautiful & inspiring young girl," Elizabeth wrote. "I am in awe of Victoria’s legacy as it will live on to touch and save an innumerable amount of people battling the same demons."

Elizabeth remembered a conversation she had with Jackie during the charter as well. "@therealqueenofversailles & I also shared a brief but touching moment on the sundeck one morning as we viewed a rainbow over the island," she said. "We spoke of God, butterflies, and the loving memory of her beautiful daughter."

Elizabeth ended the post by sharing that it was "a lovely charter" with the Siegels. "Their strength and commitment to help others is inspiring," she wrote.

Life is better as an Insider
Bravo Insider is your VIP pass to never-before-seen content, exclusive giveaways, and so much more!
Sign Up for Free
All Posts About
Elizabeth Frankini
Francesca Rubi
Isabelle “Izzy” Wouters
James Hough
Lee Rosbach
Below Deck
Celebrations
Jackie Siegel
Related

Captain Lee Reflects on Opening Up About His Son