Sign Up for Free to View
Braunwyn Windham-Burke Breaks Down While Talking About Her Weaning Party: "I Wasn't Really Celebrating" 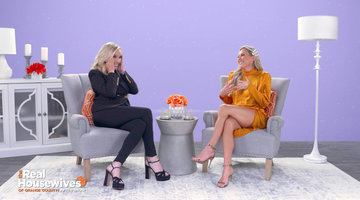 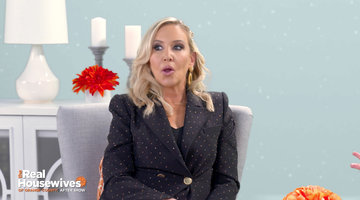 Braunwyn Windham-Burke goes big with everything that she does, so it's no surprise that her 42nd birthday party was absolutely amazing.

The Real Housewives of Orange County newcomer kicked off her big day by sharing a photo of herself in — what else — her birthday suit. Braunwyn posted a pic on Instagram on December 7 that showed her posing mostly in the nude, with the exception of some panties and an X on each breast. Braunwyn's husband, Sean Burke, can also be seen posing with her. As if it wasn't already sultry enough, there's also a red filter over the photo to make it that much sexier.

A post shared by Braunwyn Windham-Burke (@braunwynwindhamburke) on Dec 7, 2019 at 6:09pm PST

That pic certainly set the stage for what turned out to be an unforgettable fête. Kelly Dodd and Emily Simpson both came out to help Braunwyn ring in the big 4-2. If you scroll through the collection of photos in the below Instagram post, you'll see that Kelly and Braunwyn also had a little bit of fun with a couple of singing bowls, referencing that moment between Kelly and Shannon Storms Beador during the ladies' trip to Miraval in Arizona earlier this season of RHOC.

Happy Birthday @braunwynwindhamburke what an awesome party 🎈 and thanks at @elizabethlynvargas for hitting me on the head and causing blurry vision!!

Kelly and Emily weren't the only familiar OC faces at Braunwyn's party. RHOC alum Meghan King Edmonds also had a blast at the "over-the-top celebration for this one-of-a-kind woman," she shared in her Instagram Story.

Braunwyn's party became a bicoastal affair when The Real Housewives of New York City's Barbara Kavovit turned up to get turnt up. Barbara had "so much fun celebrating" Braunwyn, she gushed in her Instagram Story.

The evening included your typical birthday party essentials like a stellar cake and, you know, a stripper pole, which Emily (or should we say "#funemily," as Braunwyn put it) rocked after just having hip replacement surgery in October.

We don't know how Braunwyn could possibly top this for next year's birthday party, but we're sure she'll find a way.

Get all the scoop on another wild night by checking out The Real Housewives of Orange County Season 14 After Show, above.

Catch up on all of this season's craziness through the NBC app. Check out a sneak peek of an all-new episode coming up on December 10 at 9/8c, below.

Vicki Gunvalson Has Gifts for Everyone
Life is better as an Insider
Bravo Insider is your VIP pass to never-before-seen content, exclusive giveaways, and so much more!
Sign Up for Free
All Posts About
Braunwyn Windham-Burke
Emily Simpson
Kelly Dodd
Meghan King Edmonds
Shannon Storms Beador
The Real Housewives of Orange County
Friendship
Celebrations
Barbara Kavovit
Sean Burke
Related

Braunwyn Windham-Burke Has Dealt with Infidelity