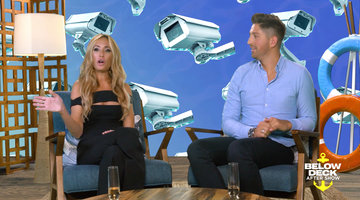 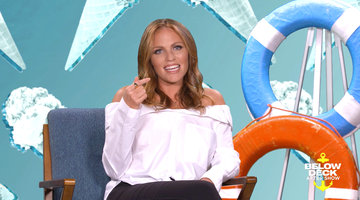 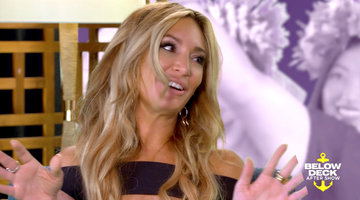 Captain Lee Rosbach's six seasons of Below Deck so far have been filled with dramatic disputes, hilarious antics, and scary moments. However, there's one memory that the Stud of the Sea will never be able to forget — for all of the wrong reasons.

Captain Lee reminisced about his time on Below Deck during a phone interview with The Daily Dish in September, and he said that his Season 3 discussion with Eddie Lucas after the bosun admitted to cheating on his girlfriend with third stew Rocky Dakota particularly stands out in his mind. "Sometimes I wish that some moments hadn’t happened. I think that [moment] on the beach with Eddie always [comes to] mind. I just, you know, I wish that one had never happened. That is a very poignant [moment] when Eddie and I had a very heart-to-heart discussion, and it was kind of sad," Captain Lee shared. "When I expressed my disappointment, he took that pretty hard, and it was a conversation that I didn’t wanna have, but I had to because there were some things I thought he needed to hear."

Eddie seemed thankful for Captain Lee's guidance on how to move forward from his mistake during their conversation on Below Deck, which you can relive below. In fact, Captain Lee and Eddie are still swapping stories today. "Every now and then we’ll get on the phone and tell some lies, as sailors do when they talk to each other," Captain Lee joked.

Captain Lee shared in his book, Running Against the Tide: True Tales from the Stud of the Sea, that he wished Below Deck cameras didn't capture the Season 1 moment when he was forced to end a charter early and ask the guest to leave the boat after the crew found what they suspected to be cocaine in one of the guest's rooms. "It just kind of showed a seedy side of things when we’re supposed to be entertaining people," Captain Lee reflected on the moment. "It’s embarrassing. Even though I wasn’t responsible for it, it’s embarrassing to the boat, it’s embarrassing to the crew, and I was mad as hell at those guys for putting us in that situation."

Check out Captain Lee's unforgettable Season 3 chat with Eddie, below.

Eddie Admits to Cheating with Rocky
Life is better as an Insider
Bravo Insider is your VIP pass to never-before-seen content, exclusive giveaways, and so much more!
Sign Up for Free
All Posts About
Eddie Lucas
Lee Rosbach
Raquel "Rocky" Dakota
Exclusive
Relationships
Related