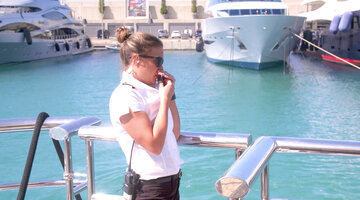 0:48
Preview
Malia White is Really Worried About This Docking... 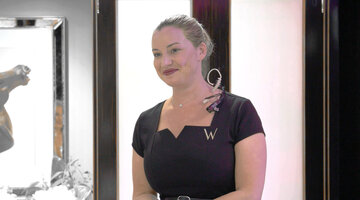 0:54
Preview
Hannah Ferrier Thinks This Ace of Base Member's Ego May Be a Little "Inflated" 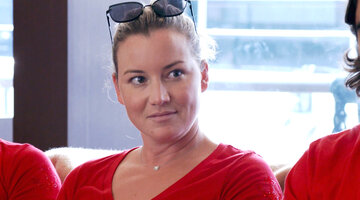 0:49
Preview
A Below Deck Mediterranean Alum Is Returning?

The search was on for a new second stew to replace Lara Flumiani following her sudden departure earlier this season of Below Deck Mediterranean. Not only did Captain Sandy Yawn find someone to step in to help the interior team, but it also just so happens to be someone that she, Malia White, and Hannah Ferrier have all worked with before.

After Captain Sandy praised Hannah for a job well done during the second charter while down a crew member, the Below Deck Med boss revealed who would be joining The Wellington as its new second stew: Christine "Bugsy" Drake.

Below Deck Med fans will remember Bugsy from Season 2, where things got increasingly tense between her and Hannah. It didn't help matters when the chef that season, Adam Glick, memorably suggested that maybe Bugsy should be chief stew. Nor did Hannah appreciate when Bugsy looked at those messages between her and charter guest Jason Ziegler, who was a little flirty with the chief stew while he was on board the Sirocco. The stew drama came to a head at the end of the season when Bugsy confronted Hannah and told her she had "been a lousy chief stew" that season.

So it might not come as a surprise that Hannah didn't exactly look thrilled when she heard the news about Bugsy's return. Captain Sandy noted to the entire crew that Bugsy has worked as a chief stew, but she was coming in to work as a second stew this season. "So you're gonna have support on the interior," she told Hannah during the crew's tip meeting. "We're gonna toast to that because she's gonna be amazing."

Noticing Hannah's reaction to the news, Captain Sandy assured Hannah that Bugsy coming on board was "a good thing." "You should be relieved. She's great on table settings, Hannah," Captain Sandy said. "She's gonna kill it for you."

One person who was excited for Bugsy's return was Malia, who shared in an interview during the episode that the two had become really close after Season 2. Malia had even met Bugsy's family. "Her and I are really good friends," Malia told some of her crew members during the episode. "But her and Hannah aren't the best of friends."

Malia later assured Hannah during the crew's night out that Bugsy's arrival wouldn't change the goodwill they had built this season. "You know Bugs coming doesn't have to change you and I," Malia told Hannah, who replied, "I hope it doesn't."

"Obviously, it was a shock to hear it, but she's a good second stew work-wise," Hannah told Malia. "We don't have to be best friends or anything, but the ball is in her court."

While speaking with third stew Jessica More about their new crew member, Hannah said that Bugsy "was pretty bad with me" when they previously worked together in Season 2.

Before the episode came to a close, we saw Bugsy walk down the dock to the yacht amid a thunderstorm. Malia excitedly greeted her friend as Bugsy exclaimed, "I'm bringing the thunder!"

We'll have to wait and see how things go between Hannah and Bugsy, but it sounds like the chief stew is at least willing to put their past conflict behind her and make things work for this season. "I'm feeling a little bit apprehensive about Bugs. Will I trust her? No. Are we gonna be friends? No," Hannah said in a preview of the next episode of Below Deck Med. "Are we gonna work together? Yes."

What Does Malia Think of Adam's New "Boatmance"?