Sign Up for Free to View
Dorit Kemsley to Kyle Richards: "I Have a F---ing Life!" 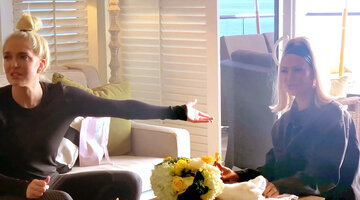 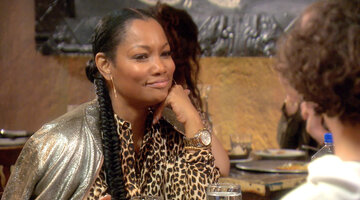 1:28
Preview
Garcelle Beauvais Is OK With Being a Strict Mom 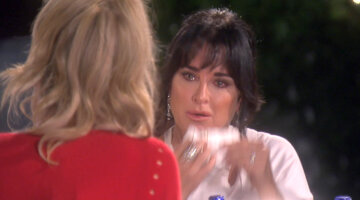 It was the moment we've all been waiting for. The Real Housewives of Beverly Hills ladies finally attended Teddi Mellencamp Arroyave's much-talked-about retreat in the May 6 episode.

As much as the accountability coach hoped there wouldn't be any drama among the 90210 crew, there was plenty of it after Dorit Kemsley showed up to the retreat late. Kyle Richards called Dorit out for her tardiness, especially since it was clear that she had time to get her glam on (clip above).

Then during Denise Richards' dinner party later on in the episode, Kyle poked a little fun at the photo shoot Dorit seemed to put on at her house before coming to Teddi's retreat. "If she really, genuinely just had to take her kids to school and be late, fine," Kyle said of the snaps. "You had a full photo shoot with glam posing in your living room for I don't know how many hours. I mean, hello, I have a life."

We saw a bit of these pics during the episode, but in case you wanted to have an even better look at them for yourself, Dorit graciously shared them all on her Instagram for us to see.

In one photo, Dorit included a cheeky message referencing some of the ladies' comments that she came to Teddi's retreat donning athletic wear, but she didn't actually work out: "If you wear workout clothes when you’re not working out."

Dorit also commented on all of the conflict these photos would later bring. "The picture that caused such an uproar on tonight’s episode of #rhobh," she captioned a photo of her looking out a window. "If only I was looking into the future here and could see how upset this pic would make someone."

Garcelle Beauvais agreed that the photos caused a stir during the episode in the comments to the Instagram post. However, Dorit also wrote in the comments that she has no regrets. "I wouldn't change for anybody (no matter what they think) and if I had to do it all over again, I'd do it the same way," she said.

Dorit had some more fun responding to her fellow Beverly Hills' Housewives comments during the episode in the caption to a post with a close-up photo of her look. "Beverly Beach Barbie reporting for support duty at All In," she said.

Beverly Beach Barbie 👱🏻‍♀️ reporting for support duty at All In 😅 #allinbyteddi

If a picture is worth a thousand words, what will the Beverly Hills Housewives have to say about all this?

Catch a preview, below.

Denise Richards: "I'm Not F---ing Doing This"
Life is better as an Insider
Bravo Insider is your VIP pass to never-before-seen content, exclusive giveaways, and so much more!
Sign Up for Free
All Posts About
Denise Richards
Dorit Kemsley
Garcelle Beauvais
Kyle Richards
Lisa Rinna
Teddi Mellencamp Arroyave
The Real Housewives of Beverly Hills
Related

Dorit's Hubby PK Is Totally Twinning with Their Son

Dorit and PK Explain Their Finances