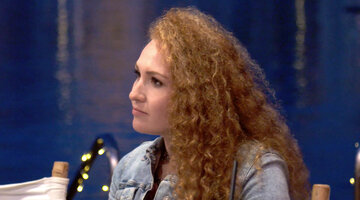 1:58
Preview
Ciara Duggan Admits to Feeling Lonely on the Boat 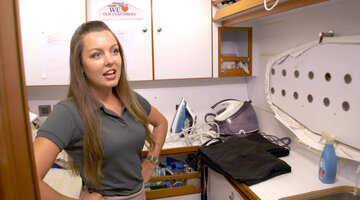 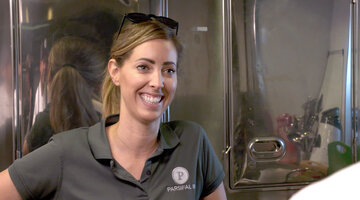 1:39
Preview
Adam Glick Thinks a Relationship with Jenna MacGillivray "Would Be a Disaster"

The Below Deck crew members have been known to get a little (OK, a lot) flirty with one another during each and every charter season. However, Georgia Grobler and Paget Berry's interactions this season of Below Deck Sailing Yacht have raised some eyebrows among the Parsifal III crew and fans alike.

You see, Paget has been in a long-term relationship with deckhand Ciara Duggan, with whom he also shares a cabin this season of Below Deck Sailing Yacht. But to some, it seems like he and Georgia have been getting along in a way that's more than just friendly. Check out the example above to see what we mean.

When The Daily Dish caught up with Georgia in New York City last week, she said that she and Paget not only had a "very sincere friendship," but she and Ciara were also friends during the charter season.

Georgia even admitted that she was flirting with Paget this season. "I mean it, it is. But I mean, like, have you heard me talk to anyone?" she said. "Like, this is just how I speak."

Though Georgia said that all of the Below Deck Sailing Yacht crew members "talk like that," she also said that she understands why some people think she comes off looking like "a homewrecker" with Paget.

Georgia shared a similar sentiment during an interview in the March 16 episode of Below Deck Sailing Yacht. "I very much do challenge boundaries," she said. "It's not like I've got a mistress personality or anything, but I can see how a woman wouldn't like me making those kinds of jokes to their man."

However, Georgia also recently told Decider that she would never do anything to put Paget and Ciara's relationship in jeopardy. "I do have immense respect for Ciara and Paget’s relationship. I was never like, come to my cabin," she said. "It’s just stupid innuendos and jokes about laundry and underwear and that is just what it is."

See what's coming up in an all-new episode of Below Deck Sailing Yacht on Monday, March 23 at 9/8c, below.

Julia Lemigova on the Latest in Her Marriage to Martina