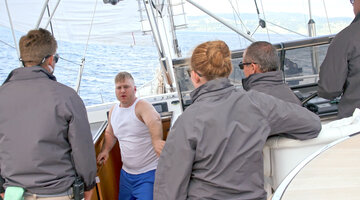 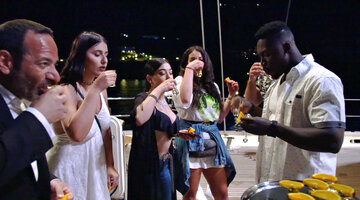 1:43
Preview
This Is a Seriously Wild Below Deck First 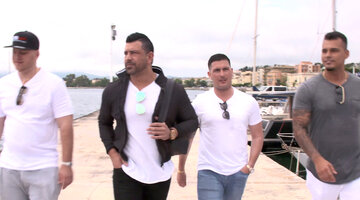 0:39
Preview
These Long Island Bros Are Ready to Party on Below Deck Sailing Yacht

We couldn't take our eyes off of the charter guests in the March 9 episode of Below Deck Sailing Yacht. Not only were they some of the wildest we've ever seen, but we also welcomed back a familiar face.

Dr. Frank Martinis was one of the so-called "Long Island bros" who chartered the Parsifal III in the episode (clip above). And while his name might not be at Dean Slover-level of recognizability, he has definitely played a major role in the world of all things Below Deck.

Dr. Frank Martinis in Season 7 of Below Deck Sailing Yacht.

That means Frank had already eaten food prepared by Adam Glick and knew that he could expect nothing but the best cuisine from the chef. However, Frank also had the pleasure (or should we say the misfortune?) of being part of the last charter group to eat Mila Kolomeitseva's food before Captain Sandy fired her in Season 4.

Frank isn't the only notable charter guest to have climbed aboard the Parsifal III this season. The primary for the second group of charter guests was Whitney Thompson Forrester, who viewers will recognize as the winner of Cycle 10 of America's Next Top Model.

Did You Catch the Former Reality TV Star Who Was a Charter Guest on Below Deck Sailing Yacht?

We can't wait to see who charters the boat next.

See what these charter guests are bringing in an all-new episode of Below Deck Sailing Yacht on Monday, March 16 at 9/8c, below.

See the Aftermath of the Charter Guests' All Night Rager
Life is better as an Insider
Bravo Insider is your VIP pass to never-before-seen content, exclusive giveaways, and so much more!
Sign Up for Free
All Posts About
Adam Glick
Mila Kolomeitseva
Sandy Yawn
Below Deck Sailing Yacht
Related