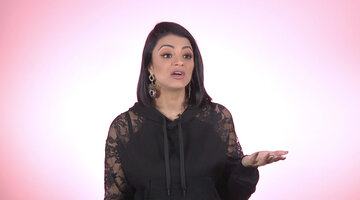 Now Playing
1:56
Digital Original
Golnesa "GG" Gharachedaghi on Who She Plans to Raise Her Baby With 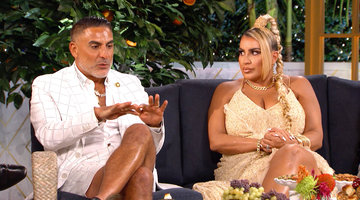 2:12
Preview
Reza Farahan Says He and Mercedes "MJ" Javid "Have Taken 1,000 Steps Back" in Their Friendship

1:27
Preview
Reza Farahan Makes a Huge Revelation: "I Never Want to Have a Child"

Even before Golnesa "GG" Gharachedaghi was officially expecting, she knew that she wanted to raise her first child on her own. GG began her journey to become a mom with the intention of finding a sperm donor and undergoing IVF.

GG opened up more about her decision to start a family without a partner during an interview with The Daily Dish in New York City in February while she was about seven months pregnant, which you can view, above.

"I've seen the divorce rates, especially in America, let alone L.A. You just have this elaborate wedding and you party, it's not really anything more than that. And that turns into a divorce, and that's usually when the child's like 3, 4 years old and has to go through that separation situation," GG shared. "So many kids go through that where their parents hate each other or they just don't get along, and they have to pick between sides or split holidays."

GG said, "I would rather my child end up seeing me have a partner or maybe a couple in the future that I get along with."

Just because GG doesn't currently have a partner doesn't mean she will be raising her child alone. She said she's thankful to have a lot of support from her loved ones, including her mom and dad, who are still "happily married." "I just think that I have a lot of love to give right now, and I have a great family that's prepared to give a lot of love," GG said. "And if the day comes that I meet someone that works out for the time being, then that's what's gonna happen."

Since GG began the journey of trying to start a family, which has included undergoing IVF multiple times and experiencing an ectopic pregnancy, she has really been focused on bringing a happy and healthy baby into the world and not so much on her love life. "It's been impossible to even want to date. I'm not a dater per se," she said. "It's just like, I haven't had a chance to want to meet someone and date because I've been so busy trying to get pregnant."

But GG isn't so worried about finding a special someone in the future. "I don't have a problem meeting men," she said. "So when I want one, I'll just get one."

GG revealed during her baby shower that she will be welcoming a son named Elijah. She previously shared at BravoCon that she was due to give birth on May 16. However, she said during an appearance on Watch What Happens Live with Andy Cohen in February that she will be induced "a couple weeks early" so that she can resume her regular rheumatoid arthritis treatment.

See more of GG's pregnancy journey on this season of Shahs of Sunset, below.

GG on Preparing to Give Birth Amid Coronavirus Outbreak

GG's Baby Name Reveals a Detail About Her "Donor Daddy"