1:44
Show Highlight
Kandi Burruss Gets Emotional About Her Children 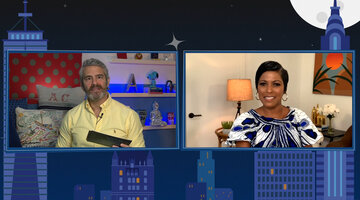 0:47
Show Highlight
Tamron Hall on How Prince Might Have Helped

Kandi Burruss recently added yet another title to her resume: The Masked Singer champion.

Kandi was crowned the winner of Season 3 of The Masked Singer on May 20, becoming the first woman in the celebrity singing competition's history to take home the Golden Mask Trophy.

Even though the identity of each contestant is kept a secret until they reveal themselves by taking off their mask upon their elimination (or their victory in Kandi's case), there were a few people who knew all along that The Real Housewives of Atlanta cast member was, in fact, the celeb behind the masked singer known as Night Angel. Kandi revealed during her appearance on Watch What Happens Live with Andy Cohen: @ Home on June 10 (clip above) that her mother, Mama Joyce, as well as her husband, Todd Tucker, her children, and DonJuan Clark, the general manager of Kandi Koated Entertainment, were the only people who knew about her Masked Singer secret.

Is Kandi Burruss Night Angel on The Masked Singer? We Finally Have the Answer

Kandi also confirmed on WWHL: @ Home that she didn't know the real identities of any of the other contestants on The Masked Singer during the competition. Of course, neither did the judges, Robin Thicke, Jenny McCarthy, Ken Jeong, and Nicole Scherzinger. Still, Kandi said that one of Thicke's guesses for Night Angel during the season left her scratching her head.

"They all had weird guesses, especially in the beginning," Kandi said. "But I was shocked by Robin Thicke saying Lil' Kim. I was like, Robin, you guessed me Season 1, you guessed my name Season 2, and here I am standing in front of you, and you say Lil' Kim. OK."

She may be a Grammy Award-winning singer-songwriter, but Kandi said on WWHL: @ Home that she was still "surprised" to have taken home the top prize on The Masked Singer.

In fact, the whole experience of being on The Masked Singer meant a lot more to Kandi than just winning. "For a long time, I really stopped singing by myself, because, you know, you get negative feedback, and it messes with your head," she told host Nick Cannon after her reveal during The Masked Singer Season 3 finale. "So I had really stopped, and I just really appreciate you guys for helping me build my confidence back up."

Life is better as an Insider
Bravo Insider is your VIP pass to never-before-seen content, exclusive giveaways, and so much more!
Sign Up for Free
All Posts About
Kandi Burruss
Todd Tucker
The Real Housewives of Atlanta
Jenny McCarthy
Lil Kim
Mama Joyce
Nick Cannon
Nicole Scherzinger
Robin Thicke
Related

Is Kandi Burruss the Night Angel on The Masked Singer?