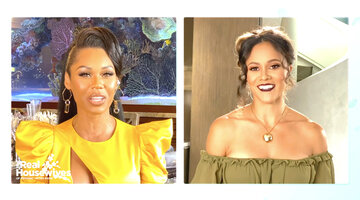 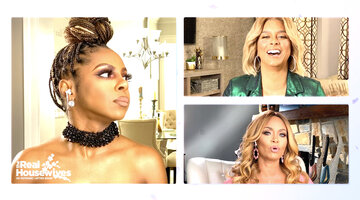 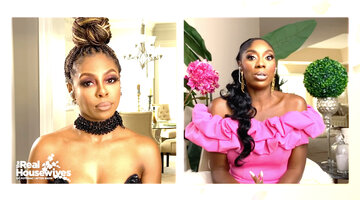 When the husbands joined the RHOP ladies during Part 3 of the reunion, which aired on December 27, Ray announced that he is planning a vow renewal with Karen in honor of their 25th anniversary next year.

Before the RHOP husbands left the reunion, Ray asked Robyn Dixon about her wedding plans after getting engaged to Juan Dixon in the Season 5 finale. "I need to know the date of your wedding because I got a 25th anniversary coming up, and we might have a wedding of our own," Ray shared.

Karen's jaw dropped at that revelation, and she got up to hug Ray, who was seated behind her on the set. "We'll make sure not to conflict," Robyn assured Karen and Ray.

Karen then got emotional while opening up about how much Ray's announcement meant to her. "It's been hard. It was a hard year. And we worked, and I really didn't expect him to say this," Karen said at the reunion. "You know, I always thought we would renew our vows on the 25th year. I just, you know, because of last year, didn't think that it was possible. So thank you for the love. I look forward to it."

To which Ray replied, "I do as well."

Karen and Ray Huger Celebrated Their 24th Anniversary in Style

The Hugers opened up about their relationship like never before in Season 5 of RHOP as they worked out what the future of their marriage will look like in serious one-on-one discussions and with the help of counseling. During one of their most memorable conversations this season, Ray caught Karen off-guard when he told her that he thinks he's still in love with her.

Ray clarified those comments during Part 3 of the RHOP reunion. "Well, you know, she knows I love her dearly. But we were in a situation where she was saying, 'Are you in love with me like you were 25 years ago?'" Ray explained. "So we were different than we were then, so I couldn't honestly answer it that I am madly in love with you the same way, although I do love you."

Karen showed her appreciation for her husband supporting her at every RHOP reunion since Season 1 in a post on Instagram on December 26. "Ray has been there at every reunion by my side," Karen gushed in the post, which also included a red heart emoji.

Karen previously shared in The Real Housewives of Potomac After Show that she and Ray "were raw this season" and noted how his acknowledgment of everything that she did for their family amid his tax issues in 2017 during the couple's meeting with a life coach had a major impact on their relationship. "It meant everything," Karen said in the above clip first shared exclusively with Bravo Insider members. "It was the thing that saved our marriage. It really did."

The RHOP grande dame also revealed how she and Ray have been able to move forward in their relationship since this season ended.

"I'm not looking for the past Karen and Ray. I like us today. There's a new layer to us. There's a lot of humor. There's a lot of love, though, just to know that he's there. He is my spiritual partner, he's my friend, but we have a lot of laughter," Karen shared in the RHOP After Show. "It's that one act of kindness that he gave me on film with Bravo that saved this unit, because I didn't know where we were gonna go. We could've gone left or right, and for him to do that, not just to me but in front of the viewers, I think it's going to rivet people because if they felt half of what I felt when he did it, it meant everything, everything."

Want more RHOP? Catch up on the latest season through the Bravo app.

See more from the RHOP Season 5 reunion, below.

It's Time...The Potomac Husbands Join Their 'Wives at the Reunion!
Life is better as an Insider
Bravo Insider is your VIP pass to never-before-seen content, exclusive giveaways, and so much more!
Sign Up for Free
All Posts About
Karen Huger
Robyn Dixon
The Real Housewives of Potomac
Bravo Relationships
Juan Dixon
Ray Huger
Related