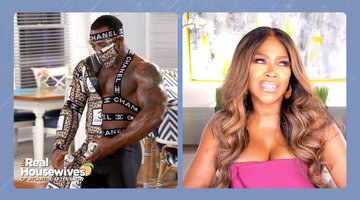 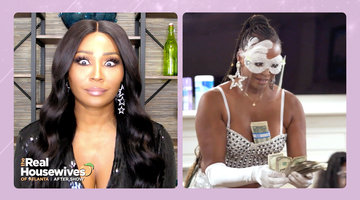 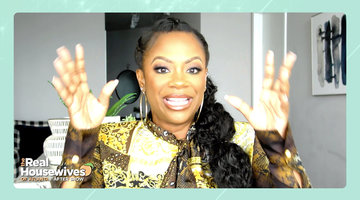 3:39
S13 - E10 | Part 3
Kandi Burruss and Porsha Williams Explain WHY They Asked Production to Turn the Cameras Off at the Bachelorette Party

The night didn't end after Bolo's performance for Cynthia Bailey's bachelorette party during the RHOA ladies' trip to Isle of Palms, South Carolina. With the camera crew gone, it looked like the real party continued well into the wee hours of the morning.

And the antics didn't just take place in the living room of the vacation home, according to Kenya Moore. She alleged that there was also some activity going on in the spare bedroom of the home.

So, Kenya launched a full-blown investigation into the matter the next day. "Honestly, I just wanted to know who else was in the room," Kenya explained during The Real Housewives of Atlanta After Show. "I wasn't gonna do anything with the information, but I wanted the information."

LaToya Ali was the first suspect to be interrogated by Kenya in the so-called "Bolo court." "This was just supposed to be a good time with all the girls, so why are you trying to expose what we were doing?" LaToya recalled of Kenya's questioning in the RHOA After Show.

In addition to LaToya, several other members of the group seemed to think Kenya's investigation was a little off-putting, including Porsha Williams. Porsha even offered up a theory as to why Kenya was digging for information after Cynthia's bachelorette party during the RHOA After Show.

"She had been doing things to pick at me... I had started feeling little stings here and there I wasn't really reacting to. So I think by that time, too, 'Oh, this will be the thing. This will be the thing I'll be able to get her to react,' or maybe just even get me to engage, because honestly, I had not really engaged with her," Porsha said of Kenya. "Even though she treated the girls crazy and didn't have food for them, even though she had us on that highway to hell bus, even though she had done all these things, I didn't feel entitled to anything but her horrible treatment because me and her don't have that relationship, you know what I'm saying? But I did feel, even within that, she had been poking me. So by the time this happened and the girls explained it to me the way she was laying it out, I was like, 'OK, here we go.'"

"This is where she wants her finale to happen," Porsha continued. "And I'm not gonna give it to her."

Kandi Burruss, who had organized Cynthia's bachelorette party, said in the RHOA After Show that Kenya's investigation also took her by surprise. "When they started talking about things that happened 'after the cameras went down,' I was kind of caught off-guard, like, 'Whoa, are we discussing that?'" Kandi recalled in the above clip. "I mean, you know, I'm a very open person, and I just put all my business out there, but all the girls are not necessarily like that. So I just kind of compared the Dungeon to Vegas, you know when they say, 'What happens in Vegas stays in Vegas.'"

Kandi added that she wanted the other ladies to "just feel comfortable to be yourself" at the party. "I guess Kenya's whole opinion was if it had been her, they definitely would have drug her," Kandi explained. "It's like, I get it, but at the same time, I just hate that it had to happen in this situation because I kind of felt like, dang, I was the one who set up the party, so I didn't really want it to be the thing that put people in a bad situation or whatever."

Kenya shared a similar rationale on Twitter as the episode of RHOA aired. "They roasted me over a crab cake what do you think they would have done if it were me in that room?" Kenya tweeted, adding "#myfriendshipmatters," in response to what Porsha told Drew Sidora about her feelings on their relationship in the February 14 episode of RHOA.

They roasted me over a crab cake what do you think they would have done if it were me in that room? 🤔#hypocrasyaritsbest #myfriendshipmatters #RHOA

Speaking of Drew, she had lots to say about Cynthia's bachelorette party during her February 22 appearance on Watch What Happens Live with Andy Cohen, including her thoughts on Kenya's investigation. "I was annoyed. I was like, listen, you are giving auntie vibes. We had the aunties and the nieces. We all had a good time," Drew said, adding that Kenya was also playing along at the party. "Like, why are we even discussing and judging?"

See what else Drew had to say about Cynthia's bachelorette party on WWHL, below.

Drew Sidora on Husband Ralph’s Reaction to Her Behavior

Life is better as an Insider
Bravo Insider is your VIP pass to never-before-seen content, exclusive giveaways, and so much more!
Sign Up for Free
All Posts About
Cynthia Bailey
Drew Sidora
Kandi Burruss
Kenya Moore
Porsha Williams
The Real Housewives of Atlanta
LaToya Ali
Related