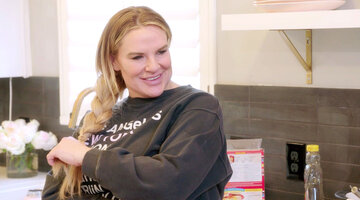 1:55
Preview
Heather Gay's Daughters Admit They Avoid Church Because the People are "Judgey" 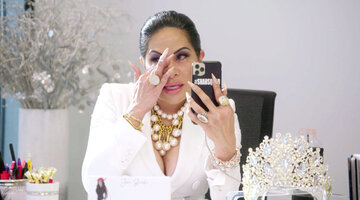 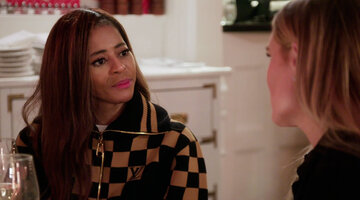 From the hospital smell drama with Jen Shah to that fabulous but ultimately fiery Met Gala luncheon, Mary Cosby has certainly given us a lot to discuss this season of The Real Housewives of Salt Lake City.

However, it seems like the RHOSLC cast member really has her fellow Housewives and fans alike talking thanks to the unconventional story behind her marriage of more than 20 years to husband Robert Cosby Sr. — namely, that he is the second husband of her late grandmother.

Mary opened up more about the origins of her relationship during the December 9 episode of RHOSLC when she met Heather Gay for dinner to discuss her lingering issues with Jen following their drama at the Met Gala luncheon (clip above). "So my grandmother, in her will, she wanted me to take her place," Mary explained to Heather.

Mary then elaborated on that during an interview in the episode. "Basically, my grandmother passed everything on to me and — literally — she wanted me to also marry her second husband, which was my stepgrandfather," she said.

During dinner with Heather, Mary admitted that marrying her late grandmother's second husband also seemed "different" and "weird" to her at first. "And I did marry him. I didn't want to, Heather. I didn't want to. That's weird to me. But she [Mary's grandmother] wanted it. And so I obeyed her because I trusted every word. If she managed to bring this church this far, then she has to be right. And look at my life," an emotional Mary shared. "I chose right."

However, Mary noted that it did take her some time to tie the knot with Robert. "It took us two years to actually marry. The reason why it took me two years, I had to be certain," she said in an interview during the episode. "As it goes on, I started to pray myself, I started to seek higher help myself, and when I did that, I felt peace with it, so I married him."

Mary added while speaking to Heather, "I chose what the man upstairs told me to do."

Heather also shared her reaction to hearing Mary's story in an interview during the episode. "I feel so bad for Mary," she said. "I feel deep empathy, because I think everyone understands choosing faith over love."

Andy Cohen asked Salt Lake City Housewives Lisa Barlow and Meredith Marks for their thoughts on the revelations about Mary's marriage during their appearance on Watch What Happens Live with Andy Cohen on December 9 (clip below). "I think Mary's marriage is unconventional," Lisa said. "And if it works for them, great."

Meredith shared a similar response after Andy asked if Mary's marriage had been a "hot topic" among the RHOSLC ladies as it has been among fans. "For me, you know, it's interesting. I think that it is definitely unusual to be married to your stepgrandfather," Meredith said. "I think everyone would agree on that. It's not the norm that you hear about."

However, "when you understand the story behind it," according to Meredith, "you just say, 'Whatever works.'" "If you're happy, you're happy. I want Mary to be happy at the end of it. That's all I really care about," Meredith said. "So, no, it wasn't like a hot spot for me. You hear about it for a second, and then great, you move on. I'm happy if she's happy. If she's not, I'm sad."

Want more RHOSLC? New episodes air every Wednesday at 10/9c or catch up on this season through the Bravo app.

See what's coming up on RHOSLC, below.

Lisa Barlow: "Some People Call Me the Queen of Sundance"
Life is better as an Insider
Bravo Insider is your VIP pass to never-before-seen content, exclusive giveaways, and so much more!
Sign Up for Free
All Posts About
Andy Cohen
Heather Gay
Jen Shah
Lisa Barlow
Mary Cosby
Meredith Marks
The Real Housewives of Salt Lake City
Family
Bravo Relationships
Related

Mary Cosby on the Mom Moment that Left Her in Tears

The Moment Jen Shah Thought "What Did I Get Myself Into?"