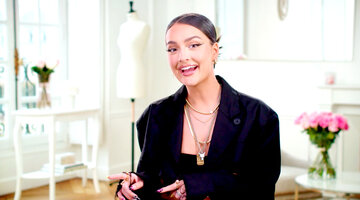 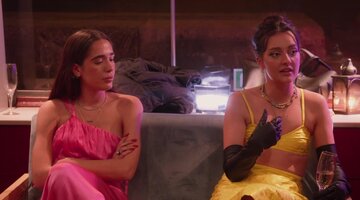 2:02
Preview
Tensions Rise Amongst the Girlfriends

1:57
Preview
Will Margaux Lignel's Dad Be Supportive of Her Fashion Business?

Real Girlfriends in Paris' Victoria Zito is not holding back about her life. As fans get to learn more about the fashion designer in Season 1, she is opening up more about what it's been like to share more about her divorce and coming out publicly as bisexual.

"I think that [divorce] happening in Paris made me develop a sense of f--k it," she told E! News of making the "really hard" to come out. "This is my life and this whole new chapter of my life, especially since we divorced, is about living my most authentic self and I feel like I couldn't do that without just being open and honest. It was extremely, extremely hard for me."

She notes that since opening up about her sexuality to her fellow RGIP cast members. she's felt nothing but love. "It makes me emotional thinking about the responses that I got from my ex-pat family in Paris," she said. "I'm very thankful I got to film with one of my best friends Margaux [Lignel]. She had known this about me for a while and I don't think she even realized how big of a deal it was until she saw me actually coming out to two other people. The support and the reaction that I got—again it still brings tears to my eyes."

"Well I guess the news is out now," Victoria later posted on Instagram Stories. "No going back."

Here's What's to Come on Real Girlfriends in Paris!

Victoria, 26, also recently spoke to Bravo in an Instagram Live in which she opened up about what it was like to put her life out there in front of the cameras. "It was definitely an adjustment for sure. It took a few moments to get used to cameras being around and stuff," she said. "But I think overall it's a really cool and fun experience... It's just really cool to get to show people what the authentic life is like in Paris."

Who Is Margaux Lignel's Dad, Jean? Get to Know the Former Newspaper Publisher and Avid Art Collector

During the candid conversation, she also opened up more about her upbringing in Texas and what it's been like to adjust to living in Paris. "You really never know where the night is gonna turn, or who you're gonna run into," she said. "I think that for me, personally, growing up and coming from Texas, coming from such a conservative place and coming to a place where you can really be unapologetically, authentically yourself. Whether that's your style or anything you want to do in life, it's such a melting pot of different cultures."

Victoria noted that she went into filming RGIP "100 percent an open book from my relationships to my family to my career to my friendships to everything," she added that the season was definitely an "emotional rollercoaster" for her.

When speaking to E!, she noted that she actually got some advice from The Real Housewives of Dallas' Kary Brittingham about not holding back when it comes to putting all of herself out there. "It's so funny, one of my largest support systems I've had since I was 17, and before she even did a Bravo show, is Kary Brittingham from The Real Housewives of Dallas. She became family to me... I was working three jobs, I was double majoring at community college and she was like, ‘Victoria, you're gonna be a fashion designer. You're gonna do good things,' and I'm like, ‘You think so? I hope so, I'll do whatever it takes," she said. "This is my dream, this is my goal.'"

In fact, Victoria noted that as more people close to her learn about her sexuality, she has leaned on Kary for advice. "Then she obviously went on to [The] Real Housewives of Dallas and it's been amazing to be able to pick up the phone and call her anytime I'm like having a panic attack like, ‘What if this comes out and what are they gonna say?' and she's like, ‘Victoria, all it's all good. You're fine,'" she said of their friendship.

And we're learning a bit more about Victoria from her BravoTV.com profile, which notes that she is a "small-town girl with big fashion dreams. Born and raised in Texas, Victoria was always encouraged by her mother to stay close to home and stick to what she knows. With a burning passion for fashion, though, Victoria moved to Paris in 2017 with a scholarship to Parsons and is currently the head designer at nascent fashion brand Chloe Colette. Recently divorced, Victoria is ready to start a new chapter and focus on herself and explore all the romantic opportunities Paris has to offer."

Start Watching the Premiere of Real Girlfriends in Paris Now!

Real Girlfriends in Paris airs on Mondays at 9/8c on Bravo. Each episode will stream next day on Peacock.

Life is better as an Insider
Bravo Insider is your VIP pass to never-before-seen content, exclusive giveaways, and so much more!
Sign Up for Free
All Posts About
Victoria Zito
Real Girlfriends in Paris
Related