Sign Up for Free to View
Of Being on RHODubai, Chanel Ayan Says She Didn't Know She Was "So Mean and Funny and Crazy"

7:36
Digital Original
Which Former Real Housewife Would Kenya Moore NOT Want to See on RHOA? 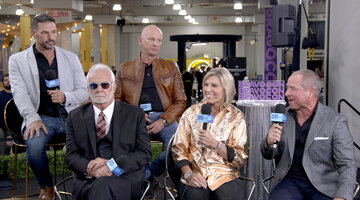 11:54
Digital Original
Captain Lee Rosbach on the One Person He Regrets Firing on Below Deck

“Probably one of the best [lunches] this year. [Chanel Ayan,] you’re the most supportive kindest human being,” Ubah wrote on Instagram on October 18. “Thank you for the pep-talk and the unconditional support.”

Fast-forward about a week later, and Ubah elaborated on the kind of advice Ayan gave her to prepare for RHONY Season 14.

“Chanel just said to have entertainment, drama. But nothing ill-intended because we are all human and we are all women,” Ubah told Page Six during the Angel Ball in downtown Manhattan. “Make it fun, but don’t go below the belt.”

In addition to her words of wisdom about the drama, Ayan (who is Ubah’s cousin, according to Page Six) also told the RHONY newbie why her fellow Season 14 cast members may “think twice” before they disagree with her.

“Chanel told me, ‘Look, you are from Somalia so you will be fine. They will think twice before trying to mess with us,’” Ubah added.

Will Ubah follow Ayan’s advice? You’ll have to tune in to RHONY when Season 14 premieres to find out.

Life is better as an Insider
Bravo Insider is your VIP pass to never-before-seen content, exclusive giveaways, and so much more!
Sign Up for Free
All Posts About
Chanel Ayan
The Real Housewives of New York City
Related

RHONY’s Ubah Hassan Has a Business for This Condiment

Here’s Why Ayan Called Out Phaedra at BravoCon 2022