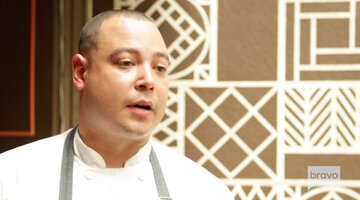 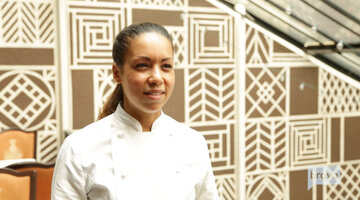 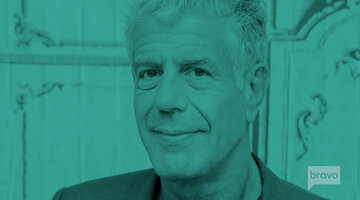 We're pretty sure the Top Chef judges had the hardest job in the world in the finale. That's because they had to crown one — and only one — of the final two as the winner of Season 15 after finalists Adrienne Cheatham and Joe Flamm had both cooked their hearts out at the final stop of the Cheftestants' tour of Colorado in Aspen.

But alas, we all know how Top Chef works. Only one person can take home the title, and after all the camping trips, Rocky Mountain oysters, and altitude anxiety, Padma Lakshmi and the rest of the judges determined the winner of Top Chef Season 15. There are some MAJOR SPOILERS about the Top Chef Season 15 finale from here on out.

Joe was declared the winner of Top Chef Season 15, which meant Adrienne was the runner-up. "I was very happy for Joe. Don't get me wrong, I definitely wanted to win. I definitely wanted to win so badly. And you're so deep in the competition. You know, it's almost two months with no days off. Joe got a little break with Last Chance Kitchen, but I just went straight through, so you're so deep in it that you don't realize that this is the end," Adrienne told The Daily Dish ahead of the finale (clip above). "I was relieved to have been able to translate my food onto the plate the way I saw it in my mind, in terms of the flavors and the presentation ... I was so glad for Joe to have won. I definitely wished I would have kicked his ass, though."

Adrienne, who chose eliminated Cheftestants Carrie Baird and Chris Scott as her sous chefs in the finale, said that she thought she and Joe were pretty much neck-and-neck after the first two courses came out. "There were certain courses that you see them in the kitchen, but then when you see the diners starting to eat them, you can tell who's on top. So the first course came out for me, and it looks plain because the tuile was covering the top of the bowl. But once you crack it and open it up, I could tell that the judges found that very interesting and the presentation underneath, I was glad it was being received well at the table," she explained. "Joe's first course was great, but I think the surprise, I was like, 'OK, I think I'm getting it on this course,'" Adrienne explained. "The second course, though, I was like, 'Joe's got this one.'"

But as the dinner went on and Adrienne heard more of the judges' critiques, she said she had a feeling Joe would be coming out on top. Adrienne said it was in that moment that she knew what mistakes she had made and what may have cost her the win. For one thing, she said that she would have either seared the short rib instead of braising it in the finale, which made it get dried out at that high altitude. She also said she could have served the short rib as one piece rather than sliced, which she had thought would make for a better presentation. Adrienne noted that she usually prepares this dish with oxtail, but that wasn't available when she went shopping for the finale.

Adrienne said she can't argue with the judges' decision to give the title of Top Chef to Joe, though. "No, I think they made a great decision. In terms of execution, I think Joe executed his dishes flawlessly. I think his dishes were beautiful, they were executed, and they were appropriate for the altitude and everything. They were kind of like foolproof," she shared. "I did maybe a little bit more involved and a little different. The menus that I've been working on are a little different than traditional southern, not quite French, fine dining, but kind of a marriage of all of those, and if I had executed better on all of the courses, then I think I should have won. But I know the mistakes that I made, so given the meal that I had, I think they made the right choice. Sucks to say, but I can take the L when I deserved it. F---ed it up!"

Still, Adrienne got emotional during her last interview of the season at the end of the finale episode. She told The Daily Dish that she was "so embarrassed" that she shed some tears after her loss. Everything had just kind of hit her all at once in that moment. "You sit down, and you're at this place, and you literally put everything you have into this dinner. And I've got Chris there, who I feel like I have more pressure to win for him than I do for me... And then you don't talk to family for so long. And then you realize it's been almost two months, and then you're done. And then you sit down and just like all the emotion comes back. There's no crying in baseball, but food is emotion. Food is pure, raw emotion and love. Like, you put love into what you're doing," she shared. "So to lose, you're just kind of like, oh my God, I did all this, finally made it, finally got my sh-- together and made it to the finale, did some good food, I think, and then didn't win."

Despite all the fierce competition we've seen from the Cheftestants all season long, Adrienne said she will always remember the finale as an overall harmonious occasion. "It was just like professionals cooking food. It was one of the best dinner services that I've had in the kitchen, in terms of the feeling and the mood," she said. "It was great camaraderie. I'm looking at Joe like, 'I just want you to cook good food; if you beat me, you beat me. But I want you to put up your best dish next to my best dish, and whoever comes out on top deserves it.'"

See the winning moment of Top Chef Season 15, below.

And the Winner of Top Chef Season 15 Is...
Life is better as an Insider
Bravo Insider is your VIP pass to never-before-seen content, exclusive giveaways, and so much more!
Sign Up for Free
All Posts About
Adrienne Cheatham
Carrie Baird
Christopher Scott
Joe Flamm
Padma Lakshmi
Top Chef
Exclusive
Food
Related

Adrienne Cheatham Is Showing Her Support for Fatima Ali