Sign Up for Free to View
Your First Look at Top Chef Season 17! 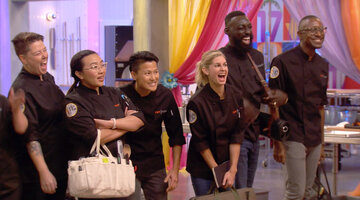 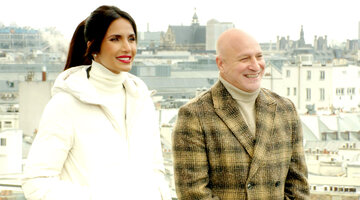 With Season 17 of Bravo's Top Chef quickly approaching, judge Gail Simmons is reminiscing about one of the competition's finales that was unlike any other.

Gail recently shared a still on Instagram of what the judges' table looked like during the Top Chef Season 4 finale in San Juan, Puerto Rico, which was filmed in 2008. The image shows host Padma Lakshmi sitting with one elbow on the table, and head judge Tom Colicchio seated next to her. Gail can then be seen to the left of Tom with her head on the table and her eyes closed.

Gail explained the pic and spilled some behind-the-scenes secrets about the image in the caption to the Instagram post. "Some levity to breakup your news feed," Gail said of the snap. "2008, Puerto Rico, Season 4 finale. Judges Table took over 8 hrs, lasting until 7am. No wonder I needed a little nap!"

Some levity to breakup your news feed and remind you that @bravotopchef premieres in just 4 days (!!!): 2008, Puerto Rico, Season 4 finale. Judges Table took over 8 hrs, lasting until 7am. No wonder I needed a little nap! 😴 👩‍🍳 photo from the @bravoandy archives 🙏❤️ #bts #topchef

With talented chefs like Stephanie Izard, Richard Blais, and Lisa Fernandes competing as the final three in that season's finale, it's no wonder the judges' deliberation to decide which one of them would be crowned Top Chef took so long. The judges ultimately gave the coveted title of Top Chef Season 4 champion to Stephanie with Richard and Lisa coming in as runners-up.

But don't feel too bad for Richard and Lisa. Richard would go on to win Top Chef Season 8, which was an all stars season, in New York City. Lisa will also have another shot at the grand prize when she competes with 14 fellow All Stars in Top Chef Season 17.

Want more of Top Chef? Season 17 premieres March 19 at 10/9c or catch up through the Bravo app.

Get the scoop on the new season of Top Chef from Padma and Tom, below.

Life is better as an Insider
Bravo Insider is your VIP pass to never-before-seen content, exclusive giveaways, and so much more!
Sign Up for Free
All Posts About
Gail Simmons
Lisa Fernandes
Padma Lakshmi
Richard Blais
Stephanie Izard
Tom Colicchio
Top Chef
Related

The Top Chef Judges React to the Season 17 Cast