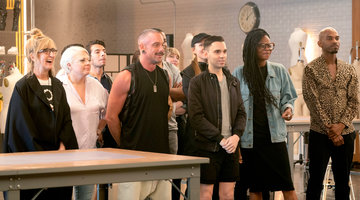 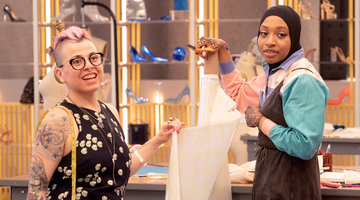 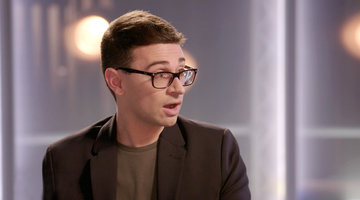 Project Runway designer Tyler Neasloney is setting the record straight on the comments he made to Karlie Kloss on the runway.

In the January 2 episode of Bravo's Project Runway, the designers were tasked with creating an upcycled look for Karlie to wear to a CFDA event in Paris. During the runway, the judges expressed that they thought Tyler's design, a dress with a black skirt and a halter top with a ruffle down the front, was neither appropriate for the challenge nor something that would be a good fit for Karlie, which is why he landed in the bottom three. "I cannot see Karlie wearing it anywhere, honestly," Brandon Maxwell said, to which Tyler replied, "Not even to dinner with the Kushners?"

Tyler was ultimately eliminated from the competition, and he apologized to Karlie. "Karlie, I want you to know that I'm not a jerk," he said. "I'm professional, so what I said earlier had no hidden agenda, no meaning, nothing like that."

Karlie thanked Tyler for his apology before he left the runway.

The Daily Dish spoke to Tyler more about his comments to Karlie and his Project Runway elimination during an interview in New York City on Friday, January 3. "Bottom line, I have a lot of respect for Karlie," he said.

Tyler explained that he felt comfortable being more lighthearted while speaking with the judges on the runway after they joked around a bit with each other during the previous challenge's critique. "Coming off of Episode 3 where we had this really awesome banter, both me and Karlie, me and Brandon, me and Elaine [Welteroth], me and Nina [Garcia], I felt like we had built a really cool rapport. I was laughing, they were laughing, we were going tit for tat. There was shade, there were jokes, and it was really fun," he said. "So I came into the Episode 4 runway after being in the bottom twice before that in a row, I came in there being like I'm friendly with the judges now. We've spoken, we've kikied, we've laughed. I can be my normal self."

Tyler clarified that his comment was meant as a way to describe the kind of woman he could see wearing his garment. However, he said that he feels like his words have been misunderstood. "So that's what is bothersome about some of the coverage, both press and Twitter, is a lot of people are treating it as this non sequitur," Tyler said, adding that he felt like people saw it as him being "just pissed about his outfit being in the bottom." "It was not a non sequitur; it was entirely related to the aesthetic of the look."

Tyler said that he was glad to get the opportunity to explain to Karlie where he was coming from before leaving the competition. "I just don't like being misunderstood, so that's why I felt like I had to clarify," he shared. "I'm not a nasty person. I thought we were on a friendly enough playing field. So Karlie, at the end of the day, she's a human, so I don't want her to just hate me or feel awful about what I said."

He added, "I set the record straight at the end of the episode, so I really sincerely hope there are no hard feelings."

Tyler said that he is eager for people to see his capsule collection that launched January 3, which he described as "absolutely a nod to the look I created for this episode" and that shows more of his "true aesthetic." "[It] is a handful of pieces that are wearable, accessible, and really beautiful," Tyler said. "It's based off of a Kate Middleton vibe. You could wear it to the Hamptons, you could wear it to Cape Cod."

Even though it got him sent home, Tyler said that he stands by the look he created for Karlie. "I really do like my look. I think that it was classy, it was clean. For being constructed out of four pairs of pants — which were wool suit pants, so not cheap materials — it was actually pretty cool," he said. "It may not have been what they were looking for in Paris, but it was well constructed and a look that could certainly be worn in a number of different places."

As for developing a reputation for throwing shade throughout this season, Tyler said he is more than OK with that. "I love shade. I love throwing shade. I love when people throw shade at me. I think if you can't laugh at yourself, how the hell you gonna laugh at somebody else? With my closest friends, our relationships are based entirely in beautiful, friendly shade. It's fun," he explained. "I'm not mad about the shade I threw this season. I'm not nasty. There's an important part about throwing shade that you have to throw in a sense that you're inviting the other person into the party."

All in all, Tyler, who is currently balancing a job at a nonprofit that houses LGBTQ+ youth with his fashion career, said that he will look back at his Project Runway experience with few regrets. "Yeah, I would grab more than Christmas ribbon for the unconventional challenge," Tyler joked about his look that landed him in the bottom three. "No, beyond that, I'm happy with how I did it."

Tyler opens up more about his time in the competition in the Project Runway Season 18 After Show, above.