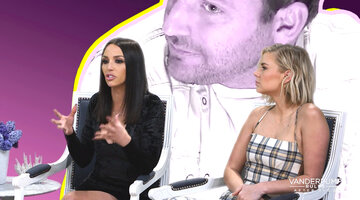 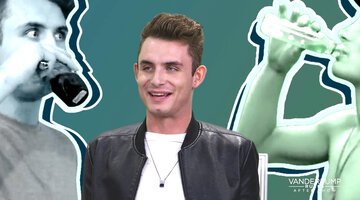 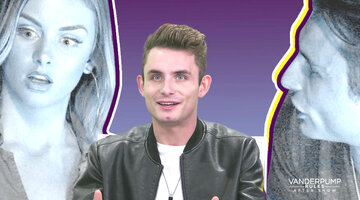 After several seasons of remaining somewhat of a mystery, Stassi Schroeder's then-boyfriend Patrick Meagher made his Vanderpump Rules debut this season. He closed out Season 6 by leaving quite the impression on Lisa Vanderpump — and it wasn't exactly a good one.

Lisa and Patrick had a cringeworthy interaction at PUMP following the progress party at Tom Tom in the season finale. After Patrick complimented Lisa's derriere a few times, he and the Vanderpump Rules boss had a tense conversation about his relationship with Stassi.

So what was going through Lisa's head when this uber uncomfortable moment was going down? "I thought he behaved like a dickhead, I really do. He said something like, 'Oh, yeah, we've met before, and I enjoyed seeing the back of you.' And I suddenly thought that's largely inappropriate because was he saying he was glad when I walked away or was he glad he was checking out my ass? Either way, I was in front of his girlfriend, and I just met him and I'm old enough to be his grandmother or mother, whatever. But he was just a bit of a twit," she said in the Vanderpump Rules After Show (clip above). "He might be a nice guy, but in that moment, the very short interaction I had with him, he wasn't nice. He really wasn't. And he had no reason not to be."

Stassi Schroeder on Her Relationship with Ex Patrick Meagher: "I Couldn't See It for What It Was"

Stassi also opened up about her ex-boyfriend's behavior during the Vanderpump Rules After Show. "I think I've buried it. I've buried every weird, embarrassed, anxiety-ridden feeling that I had because it was awful. I had such high hopes, and I just watched everything crash and burn in slow motion," she explained. "It had been such a buildup. He never was around. I put a lot of pressure on it. I think he put a lot of pressure on it. It was almost like I manifested a sh--ty outcome."

A few of Stassi's fellow Vanderpump Rules crew members were similarly not pleased with Patrick in the Season 6 finale. James Kennedy tweeted "don’t disrespect my boss" to the Vanderpump Rules ex. Kristen Doute also expressed her disapproval of Patrick's actions on Twitter. "I’ve really tried to not say a bad word about P... but I have to say this. I took it upon myself to defend his character not realizing how awful he acted. I was, and am, mortified," she tweeted. "NO ONE treats my Stassi that way. And NO ONE treats Lisa that way."

I’ve really tried to not say a bad word about P... but I have to say this..

I took it upon myself to defend his character not realizing how awful he acted. I was, and am, mortified.

But perhaps the best reaction to the moment came from another one of Stassi's exes, Jax Taylor, on Watch What Happens Live with Andy Cohen Monday night. You can see Jax's shocked, jaw-dropping reaction in the below video. "He makes me look like a saint," Jax said in the clip.

It looks like the WWHL audience agreed with Jax. In a poll asking which boyfriend was worse for Stassi, 87 percent of fans voted for Patrick.

After a longtime on-again, off-again relationship, Stassi announced in August 2017 that she and Patrick had finally decided to break up. Stassi has since started a new relationship with a man named Beau Clark. “It’s so weird because I’m like, is this what a relationship is supposed to be like, where someone’s just nice to you all the time? I realized I’ve never been in a healthy relationship ever yet. This is my first one," Stassi recently shared with The Daily Dish podcast. "It kind of makes me sad, like, wow, what was I doing wrong? Now I can really appreciate how wonderful this is and how fun and easy it is. I can be happy all the time.”

Look back on Stassi's past relationship with Patrick, below.

Patrick Does Not Make a Good Impression on Lisa Vanderpump

Life is better as an Insider
Bravo Insider is your VIP pass to never-before-seen content, exclusive giveaways, and so much more!
Sign Up for Free
All Posts About
James Kennedy
Jax Taylor
Kristen Doute
Lisa Vanderpump
Stassi Schroeder
Vanderpump Rules
Relationships
Related

Stassi Reveals How She Met Her New Boyfriend Beau

Sandoval Has Some Thoughts on Stassi's New Boyfriend