Blog: Web site containing the writer's or group of writers' own experiences, observations, opinions, etc., and often having images and links to other Web sites.

I felt it was necessary to start my blog this week by stating the actual definition of "blog" because several people have asked me why I feel it necessary to always explain myself. Well, here ya have it. A blog written by me is for me to tell my side of the story and explain the chain of events and my interpretation of those events. So if you don't like hearing me "explain myself," kindly don't read my blog.

We start this week with Vicki visiting Tamra after her breast surgery, and the first thing I notice about this scene is that Tamra has an issue when she discovers Vicki and I are now friends. First of all, the friendship between Vicki and I wasn't immediate. It has taken three years for Vicki and I to GROW into our friendship. Yes, Vicki said some mean things about me in the past, and yes I wasn't always the kindest to her. However, we have both been very open about the fact that we wanted to try to make amends over three years, NOT OVERNIGHT!

Additionally, Vicki and I were trying to make amends last year, before Tamra ever thought about scheming a friendship with Gretchen, so don't let Tamra or Gretchen fool you that Vicki and I are only friends because those two became friends.

The friendship between Vicki and I is not out of convenience, nor is it contrived. Vicki and I have both said we have nothing to dislike the other person for, and we really enjoy being around each other. Not only that, but Vicki apologized to me for everything in the past and said that if Tamra hadn't been in her ear she would have gotten to know me and befriended me sooner. I told Vicki I was sorry for not understanding her sooner but I understand her now. . .And from that we BOTH moved forward. It's ironic to me that Tamra suddenly has an issue with Vicki becoming friends with me, but doesn't seem to feel it's strange what she is doing with Gretchen, and same goes for Gretchen. HELLO ladies, you two were talking smack on each other and are friends again! Bottom line is why can't we all just get along and be happy for each other? You know, in my other circles of friends, we're just friends, not frenemies. Moving on. . .

Shannon always makes me laugh! I couldn't think of one person I'd rather take glamping with me after being cooped up for 10 days! All I wanted to do was laugh and have fun, and Shannon already knows I pack heavy, so I knew she wouldn't mind me taking two suitcases for an overnight trip! I'm a girl that needs options!!! I really wanted this trip to be special for the ladies, with s'mores packets, scarves to match each of their personalities, and sweatshirts decorating each girl's room when they arrived. When all is said and done, I think camping is fun and I knew that getting the ladies away from the typical technology would allow us all to get to know each other better, and what better place than El Capitan where we can have the wilderness and a bed!!!

When Heather arrived to Vicki's to give me her super posh brush-off about the blowdryer, I honestly didn't care. If she needed to behave in a manner that is blatantly rude, then why come at all? This is my trip and she should have just declined since she has shown all season that she doesn't like me. Something seems phony about HER behavior.

Furthermore, behaving like that doesn't give you class -- class is something you gain through being humble and living with humility and grace. She's trying so hard to be sassy and funny, yet she forgets that being funny at someone else's expense every, single time you open your mouth is not funny, classy, nor appealing. It reveals a lot of insecurity when everything you say is a put-down to someone else.

Same goes for Heather's interrogation around the campfire about my home. Yes, I am renting, and we are content doing so!!! Last I checked, she hasn't seen my bank statement, so she really doesn't know anything about my financial status. But it's actually so sweet of Heather to become my financial planner overnight. I will not react to people who are unkind. My quote from last week says it all, "Be kind to unkind people because they need it the most."

Let's move on to what is important, and that is that Shannon and I had a BLAST! My only advice in a situation like this is don't dance in the car 10 days after surgery! UGH headache! LOL! 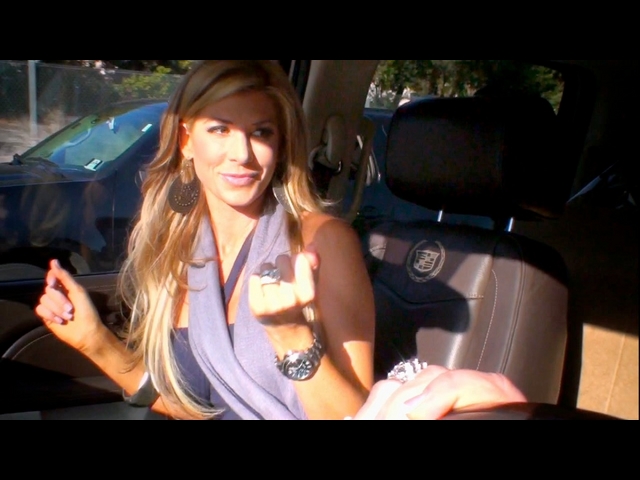 Gretchen coughing and Slade telling her to only text him was hilarious. Slade should know by now he can't shut a girl up! We like to hear our own voices, even if it's an injured voice! Gretchen truly planned on glamping with all of us, yet I knew all of us would be talking around the campfire the entire night, which is why I wasn't surprised she didn't come.

I have been getting all of your tweets and Facebook comments on my nose, and yes, I can breathe better, THANK GOD! Thank you so much for all of your concern on how I'm doing, it means a lot. If you are interested in a consult with my doctor, call Cosmeticare for Dr. Niccole (949-718-6900). Aside from General Hospital, I have some other really exciting news coming soon I'll be announcing on my Facebook page and my Twitter.