My Cup of Tea

It's Spring Break, and in the words of Vicki "WOOHOO!!!"

We are in Cabo with our amazing friends @lisaheil and @davidaugustinc (remember his stunning clothes from last episode?) with our broods. SUCH fun!!! I am halfway into my cocktail as I write this, so please forgive me if I'm not making sense.

It was lovely having Tamra over for a glass of wine to "debrief " on the mud run! She is so fun and easy to be with. I was bummed she couldn't make it to the bowling party because of her surgery. What will I do without her?!?

Tamra is definitely worried about Brooks. I'm not seeing it, but Tamra has known Vicki a long time and she is genuinely concerned about the relationship. She is being a good friend -- but I don't think it's a good idea to question someone's man. This might not end well.

Having said that, the lunch between Vicki and Brooks at Canaletto's was odd. The greeting cards are becoming a bit much. He seems to be trying a little too hard. Maybe he's just nervous around her? She's a strong, successful woman, and I know that can be intimidating to a lot of men. We have been out socially with Vicki and Brooks many times and I've never seen this dynamic. BTW, Terry is a very good judge of character and he is really fond of Brooks.

When I invited everyone to Champagne bowling I got a much better reception than when I invited them to the painting party! (haha). I was disappointed that Alexis couldn't come. Of course, I understand doctor's orders, but I was hoping we could start over.

Speaking of Alexis, her performance on Fox Five was hard to watch. First rule of "journalism": know the name of the person you are interviewing! Also, let your guests talk! This is supposed to be a conversation -- not a soliloquy!!! Finally, while leading a discussion about sexual themes in the media (and being outraged) perhaps it's inappropriate to wear a blouse with your breasts hanging out. Children have access to Fox Five.

What a bummer for Gretchen that her voice isn't at 100 percent! It's so nerve wracking with such an important gig coming up. She is in great hands with the vocal coach. I thought Slade was being a bit controlling during the whole thing. I know he wanted to be helpful, but it's anxiety producing enough without being treated like a child. I was feeling for Gretchen.

Tamra's surgery. . .I am so happy for her! She is going to look so much softer and more natural! Eddie is sooo supportive. I love how he said "whatever makes you happy" about Tamra's decision to remove her implants. Well done! He's going to be a great husband and partner for Tamra.

Dinner with Jim and Alexis. I actually feel so bad for Alexis after watching this dinner. She is saying she is happy and in a great place. This is what she always wanted. I mean, that's exactly what you want to hear from your partner! Yet Jim totally shut her down. He wants her to give up the job she cares about so much -- why? It's one day a week! He wants her at home. Seriously??? He sounded like Fred Flintstone, only less self-actualized. 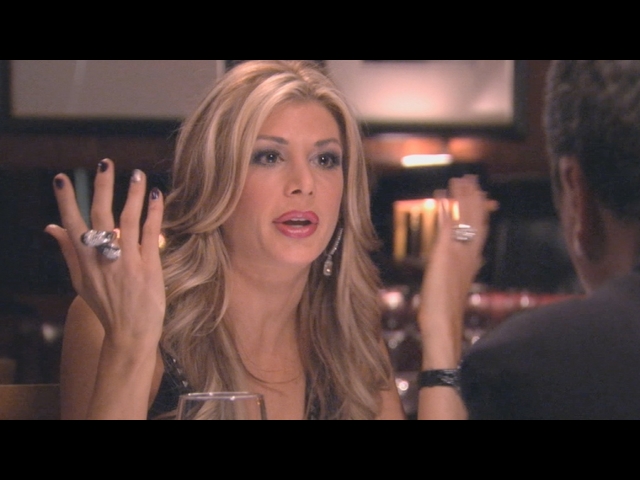 First of all: for the record I did not invite Sarah to the party . She is Gretchen's friend and though and I usually say "The more the merrier," in this case. . .maybe not. We had a nice chat at the top of the evening (love her then-boyfriend Kurt, he's a doll) and it all went downhill from there!

I was worried about Gretchen and Slade getting along with VickI and Brooks after what happened at the Bunco party -- but they were all fantastic. No one was looking for drama. Everyone was very civil and enjoying the stress free evening. The top prize of Cristal champagne was a big hit! Too bad I STINK at bowling!!!So, Vicki and I were waxing poetic about our day in L.A. and then BAM.

Sarah puts a nuclear hit on the evening! She is yelling at Vicki for NO reason and then is hugely delusional about how she approached her. 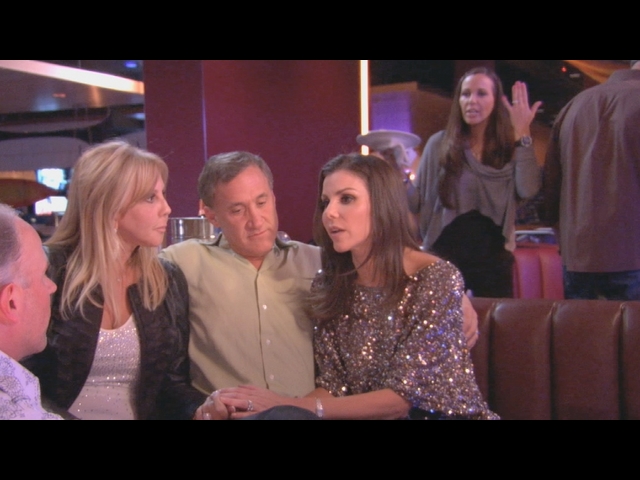 Side note: they already knew each other. Seems like she was looking to create drama and get some attention

I tried to diffuse the situation . She wouldn't listen to me or her boyfriend or Gretchen. This girl is nuts. I may need to screen Gretchen's friends for her! She is too nice to be friends with such a "wackadoodle" as G would say!

I still tried to say something nice to Sarah at the end of the evening, but she was way too impaired.

I hope this opens Sarah's eyes to the fact that she obviously has a problem. She needs to seek professional help. If not for herself, then for the people around her. She seems to want to hate on me in her blog every week. I have tried to be kind. The truth is the first time I met her (Vicki's party) she was drunk. The second time I met her (at the Improv), she was rude. This time she was plain nuts. I tried to help her at the party and she is still somehow blaming me. I'm done trying. She's not my cup of tea.

And check out the Bravo recap, too. Kim is awesome and she loves the show!