Heather: I'm Not Competing With Gretchen

I can't believe it's already July 4th week! I have been enjoying amazing time with my family and friends so far this summer. (Follow me on Instagram @heatherdubrow to see pictures! ) Hope you all are having a fantastic summer too!

Tamra and Eddie: So hard to open a new business! It must have been very frustrating for them to be so behind schedule. Thankfully, they are now in full swing and doing SO well! I wish I lived closer -- the few classes I've taken there were amazing! Check out CUT fitness if you live nearby!

Tamra and I have a running joke about our stomachs! So funny. It cracked me up to watch Tamra explain it to Eddie! It's a good reminder to always stand up straight AND always have your friends back (or stomach as the case may be!).

So exciting to be offered another guest star role less than a month after my appearance on Hot in Cleveland! Terry was so supportive, helpful and great -- just like the old days. So nice that the balance is back in our marriage and in our lives.

Speaking of balance, what I said on the show is true. In this one tiny moment I have it all. Obviously it won't always be that way. . .So I'm glad that I can appreciate this period of time and enjoy it!

In the limo. . .It was nice to see everyone excited for Tamra's big day of wedding dress shopping! I was bummed I couldn't drive with them, but I had the table read for Malibu Country and I didn't want to pull focus from Tamra's day -- so I decided to wait until later to share my news.

Dress shopping was SO fun! Who doesn't love to see their friend try on wedding dresses?!? Plus, they served chocolate and champs! What could be bad??? 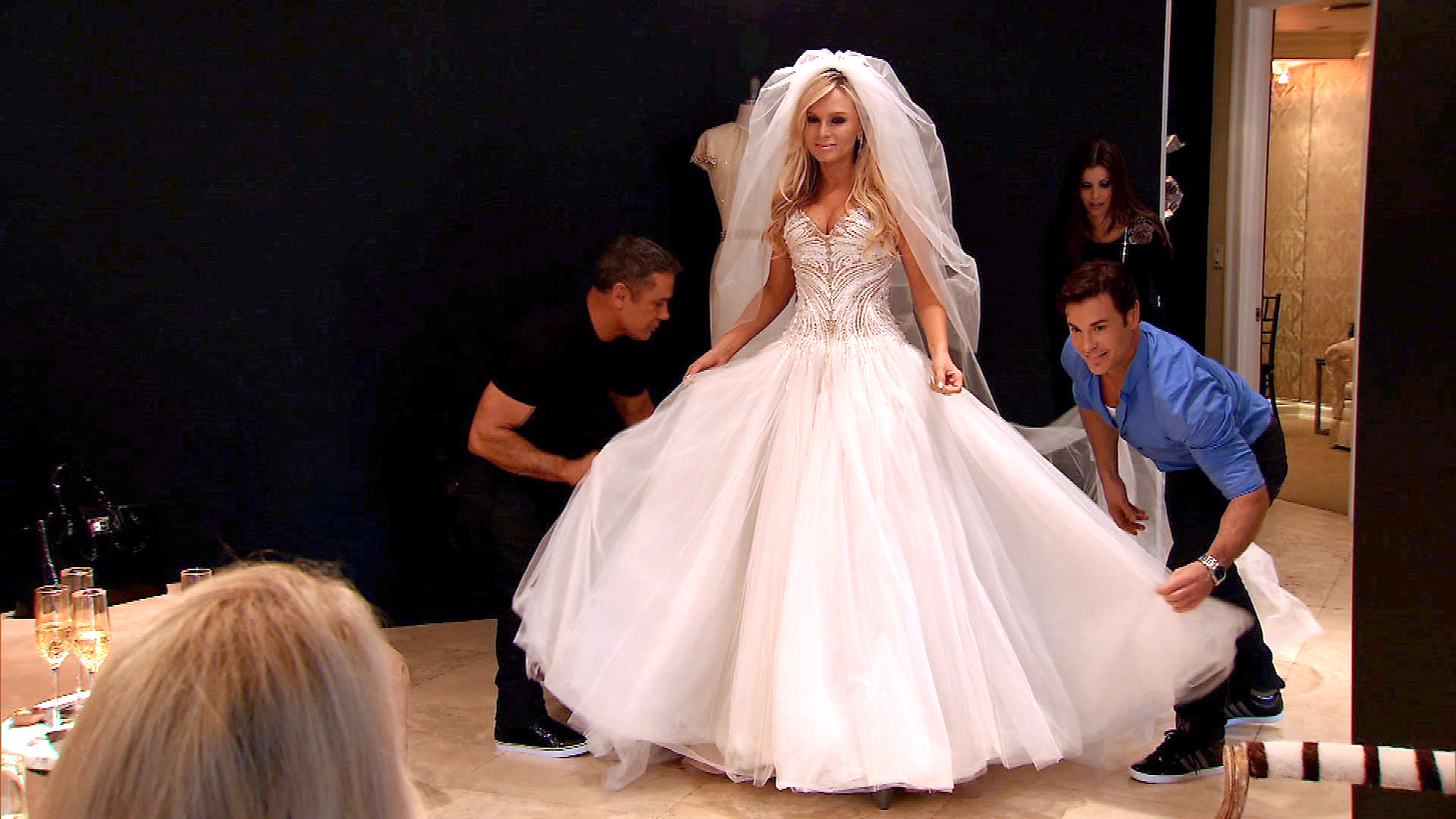 Tamra looked insane in every dress. Her figure looked incredible! For the record, I said "INNER CORSET"!!! Oy!

Drama amongst the dresses...Why does everyone feel the need to keep asking questions about Brooks? Vicki is visibly upset. This is the time to shut this conversation down. 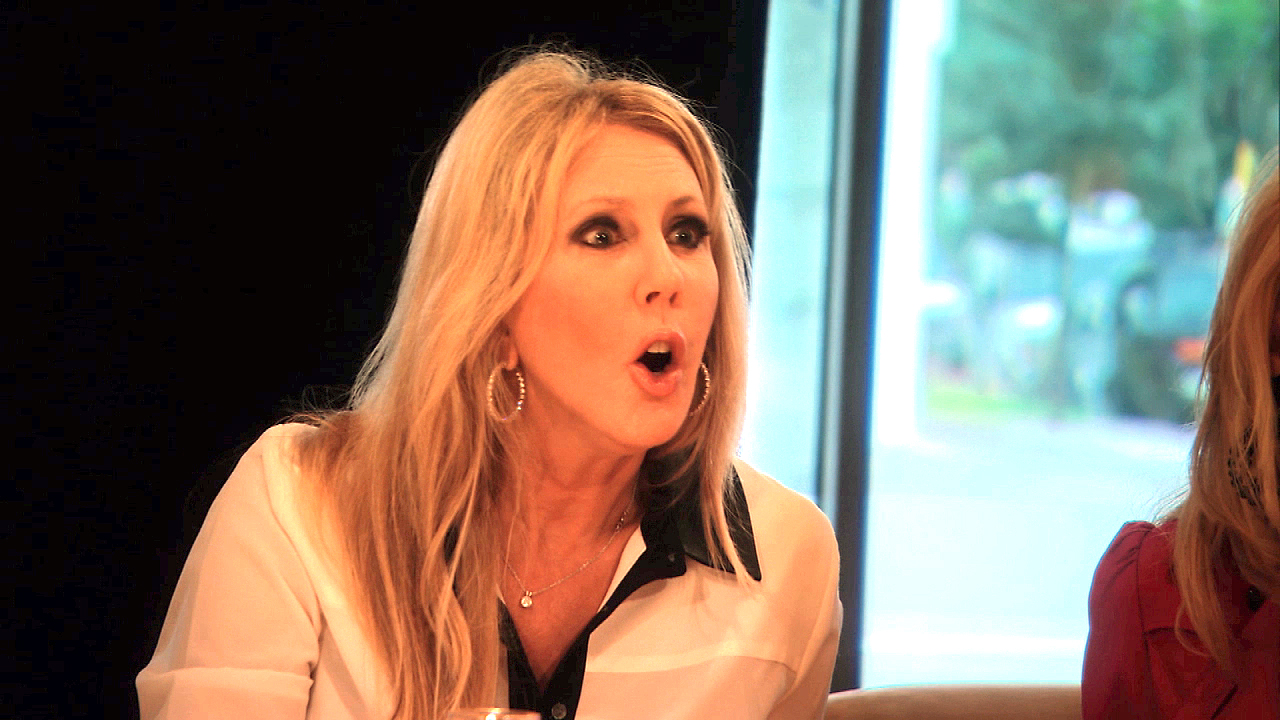 Also, Lauri looks like she waiting for her moment to start trashing Brooks. Vicki just said they broke up -- why does she need to know this? Is Lauri saying these things just to hurt her? Because I don't see any other reason. And why today ?!? At wedding dress shopping??? Unnecessary and inappropriate.

If you are wondering why I chose to share this information, I was annoyed on Tamra's behalf. There is a difference between discussing an incident that happened among friends and spreading idle gossip that you are a third party to and whose only purpose is meant to offend.

I said to the group "They called to check availability for Gretchen and a few other girls for a small walk on role. Gretchen was never 'offered' anything and that small part ended up getting written out of the show. The role I was offered was entirely different."

I only asked the casting director about Gretchen because I was excited for her. She wanted to get into this business and I thought maybe we would be working together. Let this be said. I am not a competitive person -- I truly believe there is room for everyone. I don't however condone using getting "offered a role" as a way of having Tamra disinvite Alexis to dress shopping. Calling to check one's availability for a few lines on sitcom and being offered a guest starring role are two different things. Also, if there was a tangible opportunity for Gretchen to do a network sitcom, which I don't believe she has done before, she wouldn't turn it down. Nor would Tamra want her to. She wasn't offered a role. Period.

I will be co hosting Good Day LA this Wednesday July 3 starting at 9am PST! Be sure to check me out with the amazing Steve Edwards and my fabulous restaurant partner and chef extraordinaire Fabio Viviani will be making an appearance as well!

You can see my performance in the sitcom Malibu Country on my website HeatherDubrow.com.

Of course, the drama continues next week as Lydia takes us all to Canada! You will NOT want to miss this! If you want to see more behind-the-scenes photos of me, Terry and the kids, follow me on Instagram (@heatherdubrow). Or if you like to tweet: Twitter (@heatherdubrow).

Send your questions to @OKmagazine and use #OKAskHeather. I am answering questions on etiquette, party planning, child rearing, health and beauty -- ask away! Like me on Facebook.