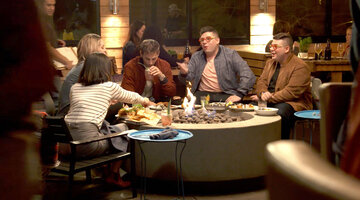 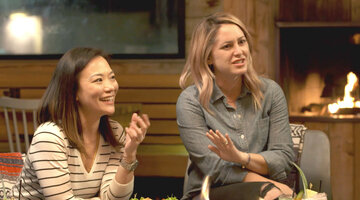 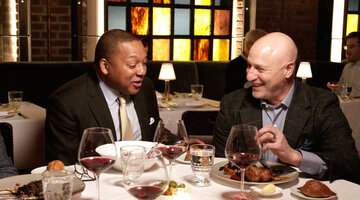 Meet identical twins Ezra and Adeev Potash (you can call them Ez and Dee for short), the hosts of Bravo's new digital series Beats + Bites with the Potash Twins (press play on the clips above to watch). These brothers are both dedicated food adventurers and internationally known jazz recording artists — NPR called them the "twin horns of joy," which has stuck. While music has been a chief passion and career, they've also become known in the food world and Beats + Bites shows them doing what they do best: pairing food and music, and exploring the cultural connections between the two.

Ez and Dee were born in Omaha and kicked off their music career in New York City before moving to Minneapolis and becoming fledgling food TV stars thanks to Bizarre Foods star Andrew Zimmern; he executive produced their Travel Channel miniseries Southern Road Trip with The Potash Twins in 2017. Andrew has been a guiding light in their food lives — they call him "Food Dad!"

But their mother, who travels internationally for work, was an early food mentor and they geeked out over food early. They told Top Chef vet Richard Blais on his Starving for Attention podcast that when they were young, she would bring back exotic treats like mochi with red bean filling: "We'd take it to school and kids would be be like, 'Oh my God, they're eating spleens!" Ez said, "and we'd be all, 'No, it's actually a traditional Japanese delicacy.'"

Their parents kept a kosher and they were vegetarians for 15 years, but their father told them that they could eat pork for the first time if it was with Andrew Zimmern or Anthony Bourdain; they didn't know either of them at the time. Andrew later made the first bites of pork happen for them (along with shrimp and crab) one Thanksgiving with special ham flown in from Europe. He called their father afterwards to mark the occasion.

When they were in their teens, the Potash twins became famous in Asia after being on the Chinese equivalent of America's Got Talent and winning. While they were in China, they had a camera crew film them as they ate local dishes like cold chicken feet and large bees.

As young horn players in jazz who were mentored by legendary trumpeter Wynton Marsalis, they strive to make music that is accessible to a younger audience that may not pay attention to the genre. "We always say we're from a jazz background, headed into a pop direction," Dee said during an interview with WCOO after the release of their jazz-charting debut album in 2015.

Guests on Beats + Bites include their jazz father Wynton Marsalis, Top Chef's Tom Colicchio, famed jazz pianist Robert Glasper and Top Chef alums Michael Voltaggio, Brooke Williamson, and Shirley Chung. Get your Hennessy slushies ready — and if you don't know what those are, make sure to press play above — and toast to the twins!

Life is better as an Insider
Bravo Insider is your VIP pass to never-before-seen content, exclusive giveaways, and so much more!
Sign Up for Free
All Posts About
Food & Drinks
Beats + Bites
Food
Related

Padma Lakshmi Made a Gorgeous Meal for a Mystery Guest