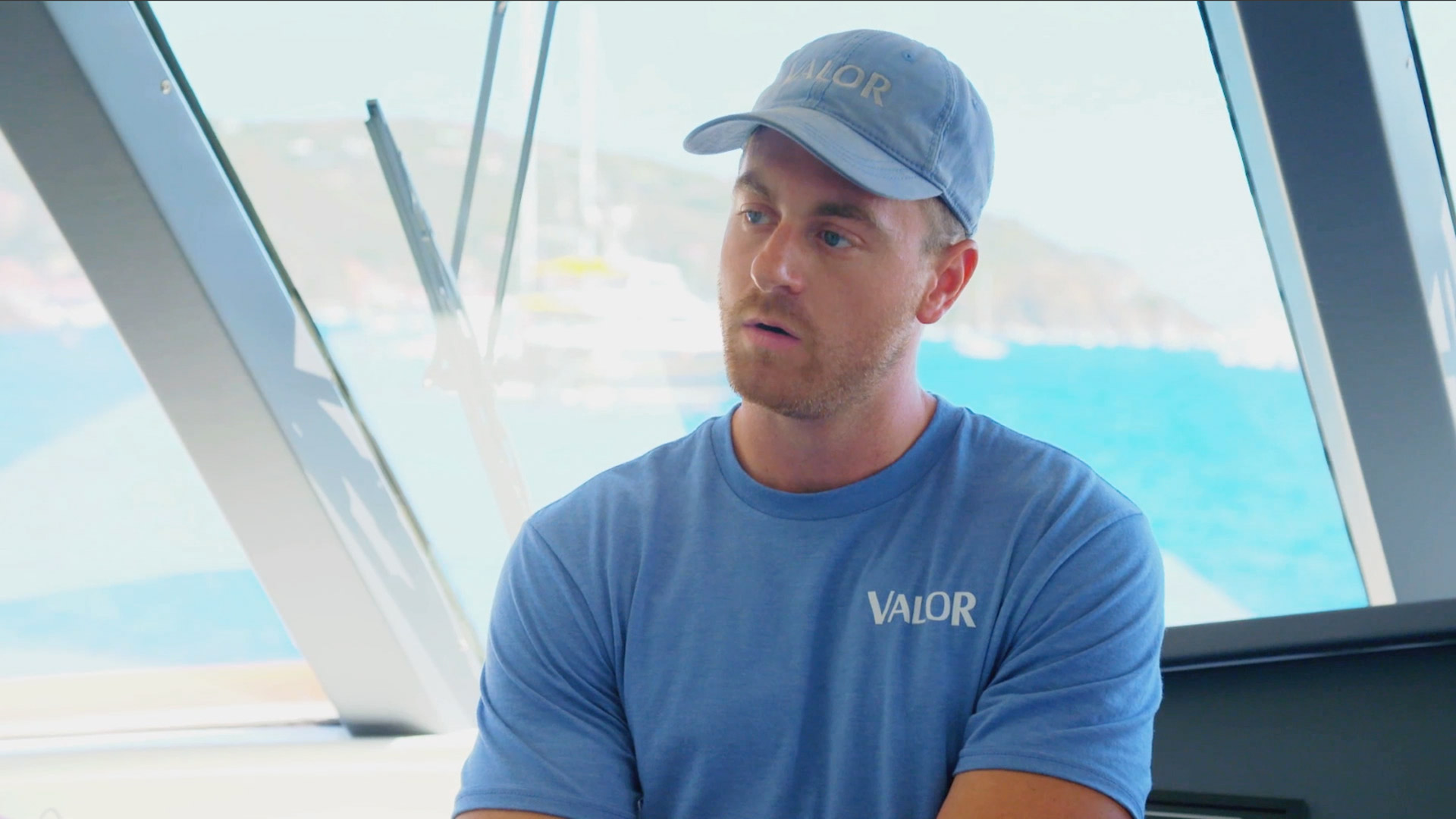 This was truly a first for me on charter. I’ve never had guests on board that didn’t drink anything at all. I’ve had guests that drank like fish, I’ve had guests that didn’t drink much, but never had a situation where no one drank anything ever. And do you know what, I wish my crew, or at least some of them had followed their example, because this was a total s--- show. OK, I take that back, not total, but the glaring examples of dysfunction were so distasteful that I am really having a difficult time. I’m wondering how it could possibly get worse.

I have a lead deckhand who has his knickers in a wad because he now has someone who has been brought into help him and give him a break, and all he can do is undermine him, disparage him to the other crew members, and act so unprofessionally it’s beyond belief. And then to stand by and not help out in any way other than to gloat when he makes a mistake? Nico, you knew the brake wasn’t released all the way but stood by and watched it go south. Then rub his nose in his mistake. Oh, and let’s go tell all the crew who will listen as well. That’s really being a good crewmate. All because you got your feelings hurt. Welcome to the real world. And what’s with you and tender keys? This isn’t the first time that you have had issues with tender keys, is it? Why would you get in the boat and not check and see it the keys were there before you got cut loose? And why were your engines not running before you were cut loose? Serious rookie mistake. To quote you, “Yachting 101.” If you don’t respect the person, you respect the rank. No one said you have to like him, just do your job, and right now you seem to consider it your job to completely decimate what little cohesiveness may have been left in the ranks and blame EJ for it all. You had four weeks to do something with this crew and look where we are now. Do you really think that your actions are helping? You have enormous potential, and you’re not getting out of here without me doing all I can to see you realize that. I’m still not tossing in the towel, but I’m not sure who it’s going to be harder on, you or me.

OK, maybe I should have told you ahead of time he was coming to help, perhaps that was an error on my part, but it certainly does not excuse your unprofessional behavior and reinforces the fact that you are not ready to lead yet. You don’t get to take your toys and just go home. No way. After your behavior this week, are you sure you want to be issuing ultimatums? 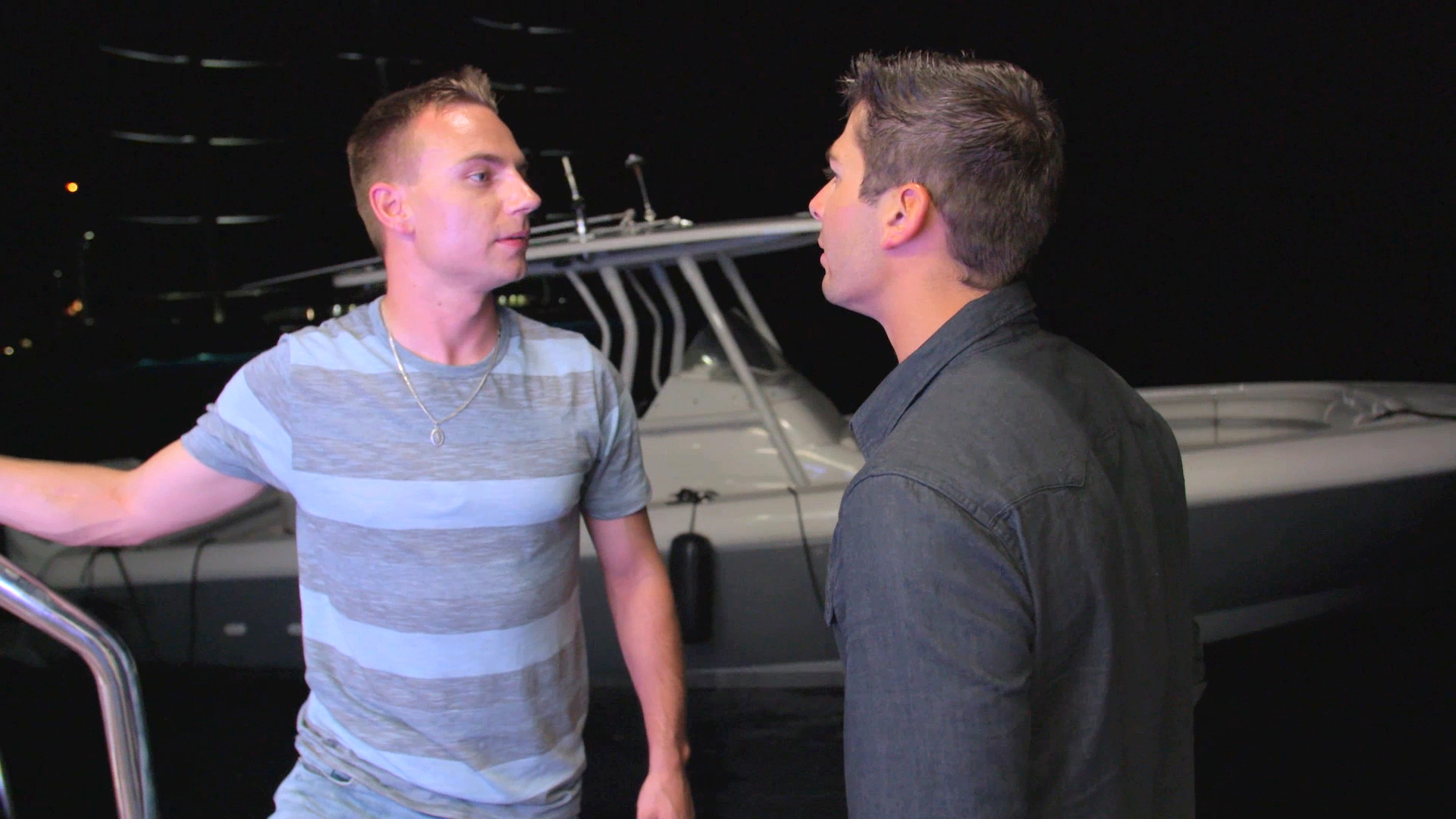 Well, well Mr. “I’m Chris Brown.” You had the best line of the night: “I’m going to rent this s--t out on Airbnb.” That was really good I thought. I also thought your attitude after seeking Kate’s advice was good as well, but I’m not going to dwell on the past. Let me just say that your parting words as you were speeding off for a night wallowing in self pity kind of sums up your stay onboard, “Who gives a s—t?” Total rhetorical question.

Kate, I thought you had a pretty good week. It was kind of you to give good advice to Chris. I also thought that your comments to Matt came at a very appropriate time, and he seemed to take it to heart. I was glad you didn’t overreact to the Mount Vesuvius of suds in the laundry room. Still searching for that niche. Unfortunately for Jen, she was too busy have a pity party to reach out and accept the olive branch you offered when she was obviously upset after dinner. But I fear the pity pit is far too deep for her to get out of at this point. 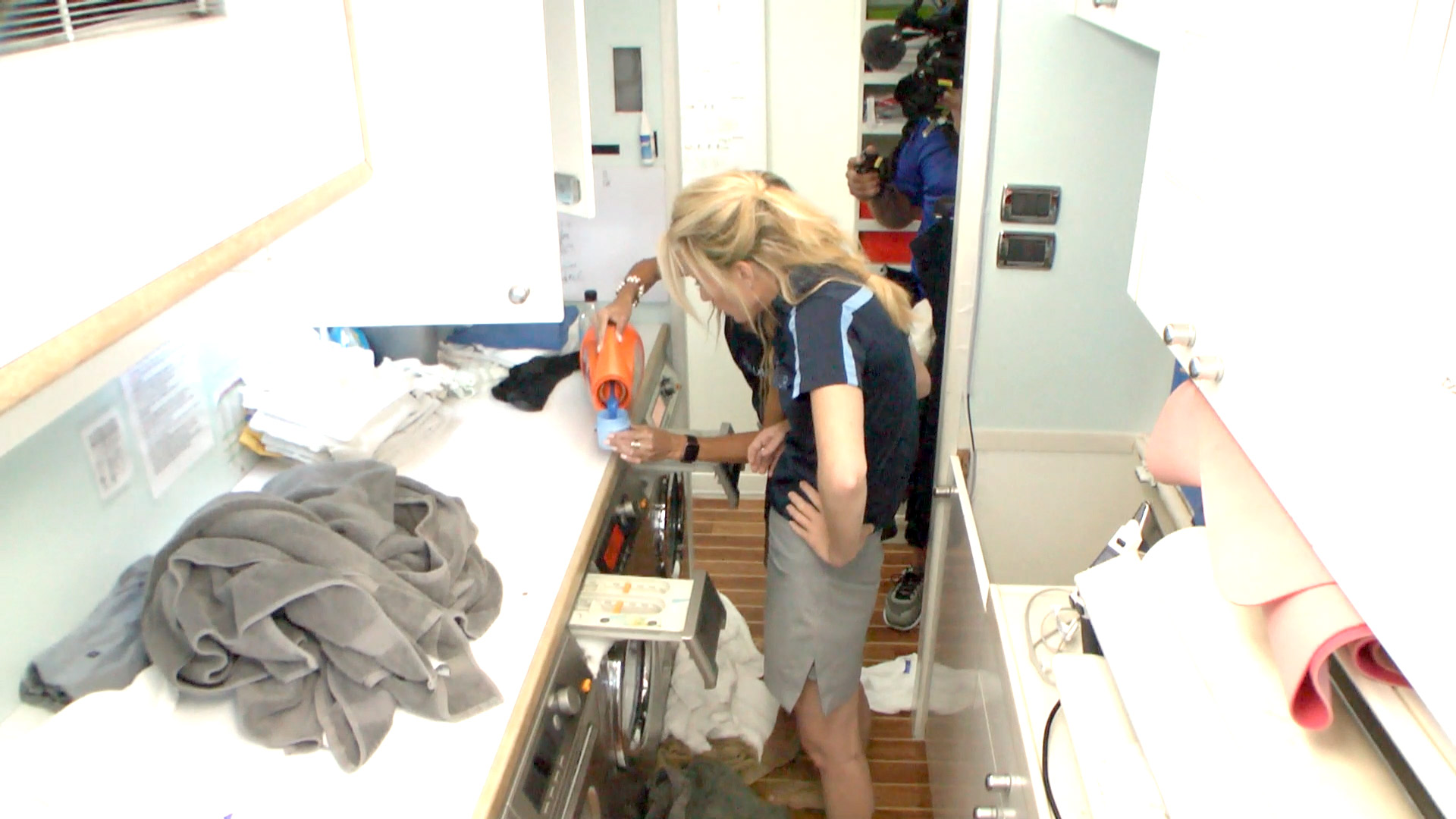 Jen, I’m not sure what will make you happy or content at this point. I’m not sure anything will. While I don’t condone Bri pushing your buttons at dinner, had you responded in a more quiet manner without disturbing the rest of the restaurant and embarrassing your fellow crewmates, I would not have had an issue with you defending yourself. Just wish you had done it in a more refined manner. That was not the place for verbal brawling. And please explain one thing to me. When you say, “I’m not complaining,” complaining always follow it. My hope is that you can get past the complaining and just do the best you can do, because I feel you have a lot to contribute once you do.

Matt, nice rebound sir. Was also glad to see that you took a page out of the guests’ playbook and stayed sober and above the fray at the restaurant. Well done. I do wish that you would make an effort to think ahead just a bit more, like with the lobster. Make sure you have the ingredients before you commit. Was pleased that you took Kate’s advice in the manner that I believe it was intended. Over all I thought that you made great strides this week. Good job.

Baker. How ya doin? I think that you are doing just fine. Other than getting rattled that one time on the anchor debacle, you were great I felt. I agree that you and Bruno have been placed in a compromising position by both of your superiors. What you should have done was put Nico in his place as EJ outranks him and politely told him that you were going to finish what EJ told you to do, and if Nico had an issue with that, he should take it up with EJ, not you. You do have two bosses, and one outranks the other. That being said, dealing with the pressure thing will pass as your experience grows. Keep up the good work.

Bruno, I basically think that other than taking your shirt off, you had a really good week as well. You continue to progress and strive to do the right thing. You and Baker are in a difficult situation, and if it doesn’t get resolved by those two on their own, I will resolve it , and it won’t be very pretty…but resolve it I will. But you seem to be dealing with it well.

EJ, I placed you in a difficult position, but I do feel that you are up to the task. There are a couple of things that I would have done differently though. It is never a good idea to discuss boat business after a night of drinking and socializing. Although, after viewing the night’s events, I would hardly call it socializing at all. I don’t think jumping off the tender in street shoes was the best move at that time. You got away with one there, you could’ve just as easily landed on your ass, and I’m sure that would not have made you feel all that good. In fact it would have given Nico a great deal of pleasure to see that happen. You and Nico are going to have to get something straight before I need to intervene. You are the bosun, and I expect you to act accordingly. You can’t keep trading verbal jabs and expect any good to come of it.

But you already know my level of tolerance for this sort of thing. I’m not going to be put in a position where I have to pick sides. I will do what’s best for the boat and the crew and its overall operation. So be the bigger person, let someone go down the low road alone if that’s their choice, don’t go with them. It’s like I have always said, “If you do your job to the best of your ability, everything else takes care of itself.”

Bri, I am surprised by a couple of things tonight. I thought it was not a good look for you to push Jen’s buttons at the restaurant that night. And as it turned out, the catalyst that you provided ruined the night for basically everyone. Surely you knew she was impaired and would react in a loud negative way, and I didn’t see any point in any of it. I do realize how much work you do, and I do realize that you don’t complain about it, and I feel that the satisfaction you get from knowing that should be enough. The verbal brawling seems to be an exercise in futility. I also wanted to comment on what appears to be your evolving relationship with Nico. I noted when you said before that you weren’t going to get in between Nico and his girlfriend. I hope that still applies, although I may have some doubt creeping in. I hope not. You are doing a good job on board, I haven’t heard or seen anything negative, and I think you are getting better each week. I hope your onboard relationships don’t affect this in the charters to come. Keep up the good progress.

Well sports fan, judging from the previews of the next episode, I’m not sure where all of this is going nor what the outcome will be. It seems romance may be in the air, and ultimatums are flying around like pesky gnats, and I’m going have to make some hard decisions. Should be interesting at the very least. So until then, may you have the wind at your back and calm seas beneath your keel.

Get a sneak peek at next week's episode now: 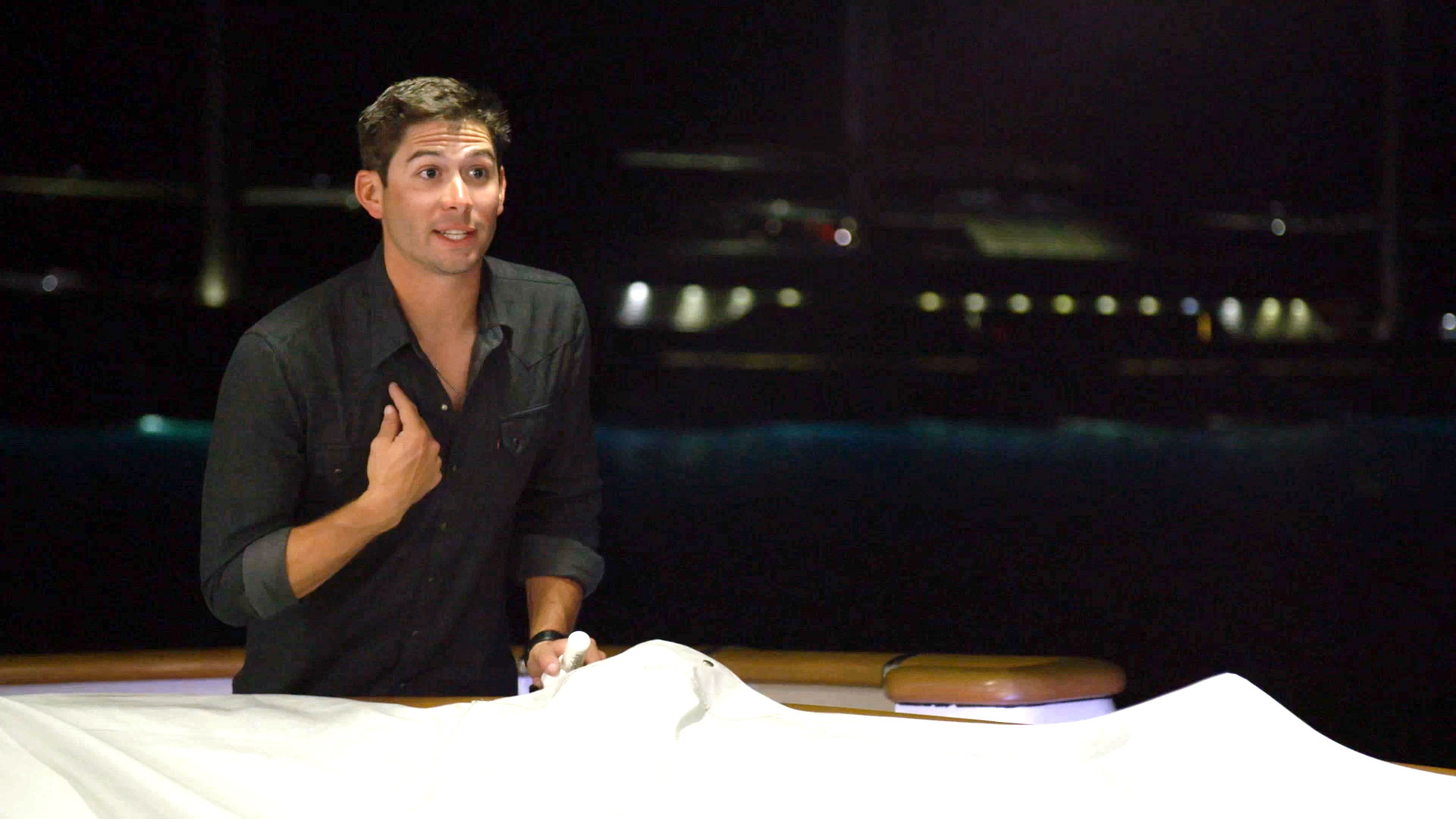 Where is Below Deck's Chris Brown Now?

Where Are Some of Your Favorite Below Deck Alums Now?

Has Ashton Pienaar Set Rhylee Gerber up to Fail?

The Crew Wakes Captain Lee Up With Their Fighting and He's Not Happy About It!

Is Tanner Sterback Too Drunk to Hook Up With Kate Chastain?