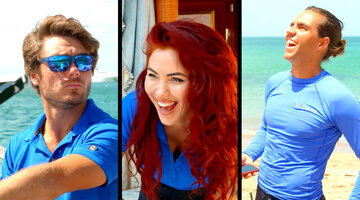 Now Playing
3:21
Preview
Your First Look at Below Deck Season 10! 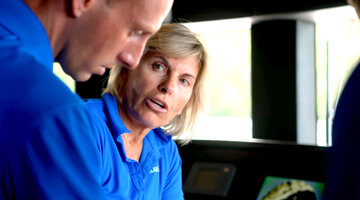 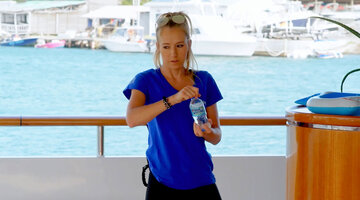 The OG Below Deck franchise is ready to hit the high seas again. At BravoCon 2022, we got all the latest details on Season 10 of Below Deck. Captain Lee Rosbach is back for a new season, which is taking place with, as Captain Lee notes, “new everything.” But yes, there will be some of the same drama and some familiar faces.

According to a press release, Below Deck “cruises through the Caribbean for its 10th season, led by stud-of-the-sea Captain Lee. Set on the luscious island of St. Lucia, the crystal-clear waters and dramatically tapered mountains, the Pitons, are sure to excite even the most discerning guests. Aboard the largest motor yacht in Below Deck history, the crew are impressed by the luxurious, massive 197-foot vessel St. David, but quickly learn that with a bigger boat comes bigger problems.”

In a supertease for the new season, the crew members face wild charters and stressful work decisions, and also wrestle with temptations along the journey. And as if that’s not enough to keep you on the edge of your seat, Captain Lee also shares a “decision” with the crew. While some naughty charter guests leave Captain Lee “schvitzing,” we’re so excited for the new season that we kind of feel the same way, TBH.

A press release also notes about the new season: “Joining Captain Lee is beloved crew member Fraser Olender, but this time as chief stew. Discovering that the learning curve on this ship is steep, he questions whether he will rise to the challenge in his new role or sink in the deep waters of the Caribbean. Fraser must also navigate a major conflict between his stews as dynamic personalities arise in the interior department. Chef Rachel Hargrove reclaims the galley, cooking her most intricate and finest cuisine yet. As she raises the bar even higher for herself, the pressure begins to mount and she struggles to stay afloat. On deck, bosun Ross McHarg works hard but plays harder as his romances on the crew nights out get him into hot water and become salty with the ladies. While the three department heads try to keep their crew in line, the entire charter season is put in jeopardy when Captain Lee makes an unexpected decision that rocks the boat to its core, leading to the most shocking season of Below Deck yet.”

Get ready for a tidal wave of Below Deck to add to your viewing schedule. Also at BravoCon 2022, it was confirmed that Below Deck Mediterranean Season 8, Below Deck Sailing Yacht Season 4, and Peacock’s Below Deck Down Under Season 2 will air next year. The news was confirmed on Day 1 of BravoCon on Friday, October 14, at the Below Deck: Crew Oughtta Know panel.

And don’t forget that Below Deck Adventure premieres on Tuesday, November 1, at 9/8c on Bravo. Check out a sneak peek below.

Your First Look at Below Deck Adventure

Life is better as an Insider
Bravo Insider is your VIP pass to never-before-seen content, exclusive giveaways, and so much more!
Sign Up for Free
All Posts About
Lee Rosbach
Show Announcements
Related

Here Is Your Complete Schedule for BravoCon 2022