Sign Up for Free to View
After Show: Chef Kiko Lorran on the Most Annoying Stew Behavior 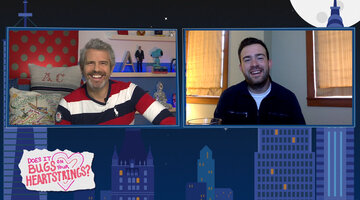 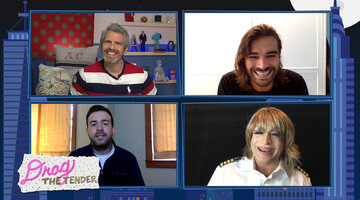 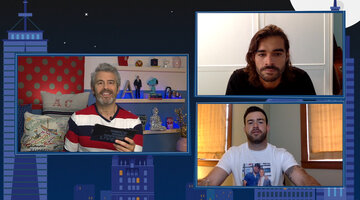 1:43
Show Highlight
Did Alex Radcliffe Ever Have a Crush on Jessica More?

One of Andy Cohen's recent guests on his late night talk show took his admiration for the host to a whole new level during the July 6 episode.

Below Deck Mediterranean deckhand Alex Radcliffe came prepared for his inaugural appearance on Watch What Happens Live with Andy Cohen: @ Home with a little surprise for the titular host. Alex wore a T-shirt featuring a photo of himself and Andy, along with "best friends" written across it.

Alex admitted during the show that he just placed his head over a photo of Andy and his famous bestie John Mayer during one of the singer's past appearances on WWHL. "Well, guess what, Alex. I can't wait to see you in person and get our own picture," Andy told the Below Deck Med cast member, to which he replied, "I can't wait."

Andy later applauded Alex's sartorial choice on Twitter. "I love someone who goes the extra mile!" the WWHL: @ Home host said of the moment.

I love someone who goes the extra mile! https://t.co/V9vrH7Lb4x

During the WWHL: @ Home After Show (clip above), Andy admitted that he was becoming completely charmed by Alex. When Andy read a fan's question to Alex's fellow WWHL: @ Home guest, Below Deck Med Season 5 chef Hindrigo "Kiko" Lorran, asking him if there was anyone he was initially attracted to on the boat, he replied, "No, because I've got a girlfriend," before joking, "Maybe Alex."

Andy then admitted, "I'm getting a little crush on Alex, I have to say."

Both Andy and Alex then agreed that a bromance had indeed been born.