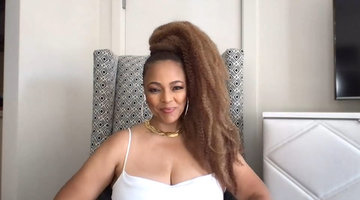 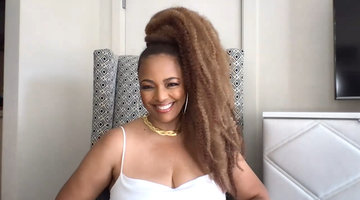 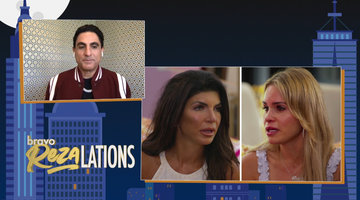 Following a major falling out in their friendship in Season 8 of Shahs of Sunset, Reza Farahan and Mercedes "MJ" Javid attempted to hash out their issues during that season's virtual reunion with Andy Cohen, which aired in July 2020. But even with the help of the likes of buddy Mike Shouhed and MJ's mom, Vida, it looked like these two were no closer to coming to a resolution by the time the reunion came to a close.

However, the end of that episode provided a glimmer of hope that Reza and MJ could one day get their friendship back on track. Four weeks after they filmed the reunion, Reza and MJ spoke over FaceTime in which they apologized to one another for how things developed in Season 8 and showed their commitment to moving forward.

When Reza appeared on Watch What Happens Live with Andy Cohen on May 16, the titular host asked his virtual guest how, after that emotional Shahs of Sunset Season 8 reunion, he and MJ got to a place where they were even willing to hear each other out.

"I have to say Reza, your Shahs reunion, your last Shahs reunion, left me very, I mean, I was almost the most upset as I've ever been from a reunion after that reunion. It was very upsetting. It seemed like the anger between you and MJ was absolutely insurmountable," Andy said in the above clip. "How did you even come to a place where you guys were even willing to meet each other halfway, would you say?"

Reza then gave some more insight into how he and MJ worked on repairing their relationship following last season's reunion episode. "I went to meet her in Calabasas, and we got in a park on the grass. It was so beautiful and felt like old times, but it was so scary that we went right back to being so cool after so much had happened," he explained. "We're learning to meet one another with our partners where we are today, here and now. I love her so much."

On the subject of spouses, MJ's husband, Tommy Feight, expressed to his wife during the Shahs of Sunset Season 9 premiere, which aired, on May 16, that he was not as quick to forgive when it came to Reza. Andy asked Reza for his response to that during his appearance on WWHL. "How can I be upset with him if he's not where I'm at?" Reza shared. "It was my process, I got to where I'm at in my time, and I pray that he does as well. And that's my hope."

The premiere episode also showed Reza and MJ reconnecting after they had lost touch following their post-reunion reconciliation. "I was so nervous but so happy to meet up with Mercedeh," Reza tweeted during the episode.

I was so nervous but so happy to meet up with Mercedeh #Shahs https://t.co/GESwcVYnhw

The meeting was successful, and Reza and MJ reaffirmed their commitment to working on their friendship. They also set a plan for a trip to Palm Springs in honor of Mike's birthday to try and bring the entire Shahs of Sunset group together.

We can't wait to see what happens on this getaway!

Want more Shahs of Sunset? New episodes air every Sunday at 8/7c or catch up on every episode ever on the Bravo app.

Life is better as an Insider
Bravo Insider is your VIP pass to never-before-seen content, exclusive giveaways, and so much more!
Sign Up for Free
All Posts About
Andy Cohen
Mercedes "MJ" Javid
Mike Shouhed
Reza Farahan
Shahs of Sunset
Friendship
Tommy Feight
Related

We Have an Update on Reza and MJ's Relationship