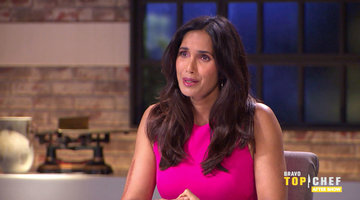 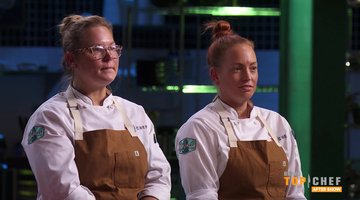 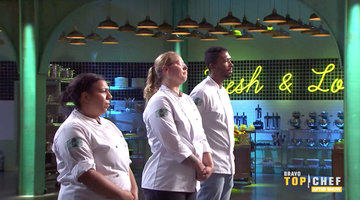 Now Playing
3:10
S18 - E3
Here's What One Cheftestant Did Immediately After Their Top Chef Season 18 Elimination

The Bravo's Top Chef Season 18 contestants were so inspired by the food they tasted during a tour of Portland's Pan African culinary scene in the April 15 episode of the show. Unfortunately, Brittanny Anderson missed the mark in the Elimination Challenge when her pickled mackerel with allspice fritter, red stew coconut sauce, and charred cucumber failed to impress the judges, and Padma Lakshmi told the chef to "pack your knives and go."

Now looking back on her elimination in the Top Chef After Show, above, Brittanny said that she knows exactly where she went wrong with her dish. "Obviously, now I can think of eight million things I should have done. I should've made chicken schnitzel with yassa sauce. I don't know why I didn't make that," Brittanny said. "I think I was just really hung up on making it look like there were a lot of things going on, like I put a lot of work into it. I definitely overcomplicated things, and I could've chilled out some."

The good times kept rolling even after Brittanny was out of the competition as she caught up with her fellow eliminated contestants while they all remained in Portland. "After we were eliminated, me and Roscoe [Hall] and Sasha [Grumman], we'd sneak up into the cast that was still on, into their conference room and hang out in their space," Brittanny revealed.

The Portland fun continued even after filming on this season of Top Chef ended. "Kiki [Louya] and I got to stay in Portland for a little while together after we filmed the show, so we got to explore a bit, eat, and go fishing," Brittanny said. "And now they're actually all coming to visit me in a month."

Brittanny formed an especially close bond with Sasha during the competition. Even though Sasha was eliminated second after teaming up with Brittanny on a dish highlighting coffee and beer, the two have remained great friends. "Sasha and I are very close," Brittanny shared. "It's one thing to have a best friend who you're really close with, but when you're close with someone who does, like, the exact same thing you do, that knows why you are doing what you do, it's just a different kind of connection."

Brittanny said that Top Chef has totally changed her outlook on cooking, particularly because of the new ingredients and flavors she was introduced to while dining on Pan African cuisine in Portland. "I definitely am exploring more of food. I'm feeling more open to using different ingredients, less fear about trying to work within other cuisines and other cultures," she shared. "In the African challenge, we talked a lot about suya spice and bouillons, and things like that that truly I've never used in the cooking I do, which is really just kind of classical, like Western. So I'm trying to branch out and use different ingredients in what I do and not just stay in my lane."

However, it's the people Brittanny met on Top Chef that have had the greatest impact on her life. "I mean, it was an incredible experience that really changed me emotionally and make me feel a little bit more connected to what I do," she said. "But truly, the best thing about my Top Chef experience was the amazing people I got to meet. The connections with these people is just worth more than $250,000 in my book."

Hear more of what it was like for Brittanny to compete on Top Chef in the video, above, including who was her biggest competition and her favorite kitchen hack.

See how Brittanny fared in the latest episode of Last Chance Kitchen, below.

One Pot Punch
Life is better as an Insider
Bravo Insider is your VIP pass to never-before-seen content, exclusive giveaways, and so much more!
Sign Up for Free
All Posts About
Brittanny Anderson
Dawn Burrell
Kiki Louya
Padma Lakshmi
Roscoe Hall
Sasha Grumman
Top Chef
Related

Kwame and Gregory Join Tom in the Last Chance Kitchen