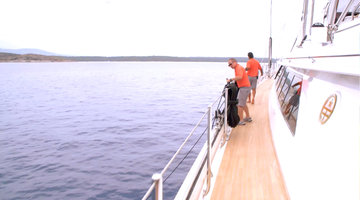 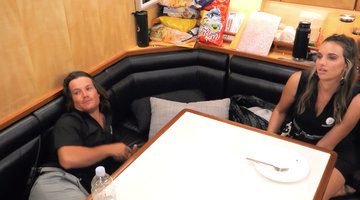 1:08
Preview
Sydney Zaruba Gets a Rude Awakening From Gary King and Alli Dore 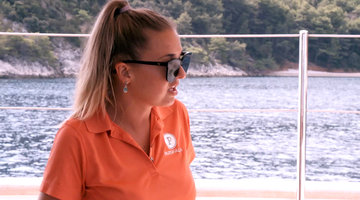 0:47
Preview
Natasha De Bourg: "Daisy Is Such a Bitch"

The latest group of charter guests on Below Deck Sailing Yacht has been challenging for Chef Natasha De Bourg, who has had to cater to all sorts of different preferences for nine people. But as Natasha tried to turn over a new leaf during breakfast service in the March 29 episode, she encountered another misstep.

Natasha served the primary charter guest poached eggs with bacon and hollandaise sauce (clip above). However, he didn't request that condiment and sent the dish back to the galley.

Natasha actually walked in on Daisy and Captain Glenn's conversation. "It was no problem at all," the chef told her crew mates. However, Natasha expressed her real feelings about the situation in an interview during the episode. "Running to Glenn about hollandaise sauce, are you f--king serious? If you're this bored, go dust a f--king lamp or clean some s--t," Natasha said. "You just want to kiss Glenn's ass. I see who you are."

Daisy later shared her reasoning for telling Captain Glenn about the poached eggs incident on Twitter as this episode of Below Deck Sailing Yacht aired. "Just to clear things up I didn’t go to Glenn to rat on Natasha," she explained. "I only went to keep him informed because it’s important he knows what’s going on so if there’s a complaint he’s prepared."

Natasha previously opened up on Instagram about "what happened to me to throw me off so badly in the galley" with this current group of charter guests. "While I strive for perfection as much as possible, I am human and humans are imperfect. We all have bad days. You guys are just seeing one of mine," she shared on Instagram on March 22 before making her account private. "I appreciate all the love. Keep watching! It gets worse and then better!"

Watch a preview below.

Things Get Dicey in the Galley for Natasha De Bourg
Life is better as an Insider
Bravo Insider is your VIP pass to never-before-seen content, exclusive giveaways, and so much more!
Sign Up for Free
All Posts About
Daisy Kelliher
Glenn Shephard
Natasha De Bourg
Below Deck Sailing Yacht
Work
Related

Daisy's First Impressions of Chef Natasha Were Not Good