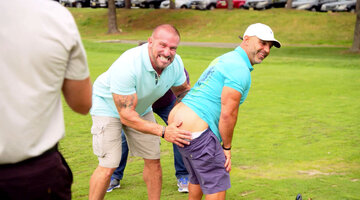 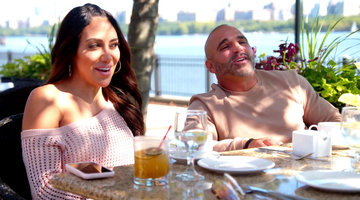 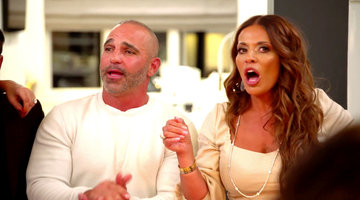 Dolores Catania's relationship with David Principe has long been a major topic of conversation on The Real Housewives of New Jersey. However, it appeared that the RHONJ crew crossed a line when they shared their opinions on David gifting Dolores with a Porsche at a cocktail party in the April 28 episode, causing Dolores to storm out of the event (clip above).

"I was so mad. I was really pissed off," Dolores reflected on the heated RHONJ moment during her appearance on Watch What Happens Live with Andy Cohen on April 28. "I hit my breaking point."

Dolores went on to tell Andy Cohen that what really got her to that point was when Melissa Gorga admitted in front of everyone at the party that they had been polling others on whether the Porsche gift was an attempt to delay getting engaged. "But you know what it is, Andy, it's a principle thing with me," Dolores explained. "You could talk to me about it, you could talk to our close circle about it, but I didn't know those people at the party. It was in mixed company."

Her fellow New Jersey Housewife and WWHL guest Jennifer Aydin said that she now "absolutely" realizes that Dolores is happy with where her relationship with David currently is. "When we first all heard it, I think we were under the impression that she wanted a ring in order to solidify the commitment," Jennifer said on WWHL. "And then when she changed her tune, we changed along with her."

Jennifer also noted that a Porsche gift doesn't sound bad at all to her. "By the way, when that poll was taken, I voted for the Porsche," she said. "Porsche and a doctor? Why do we need a ring at this point in our lives? Hasn't she done that already? No, babe."

Joe Gorga, in particular, seemed to have a lot to say about Dolores during this episode of RHONJ, calling her a "broken woman" after dealing with infidelity in her past marriage to Frank Catania. Jackie Goldschneider saw things this way in an interview during the episode: "Joe might look like he's talking to Dolores, but I think he's trying to send a message to Melissa."

Dolores said on WWHL that she agreed with Jackie's analysis. "I think it had a lot to do with it at the time and what they were going through," she said. "Yeah, I do agree with Jackie. That was a good statement Jackie made."

#RHONJ's @DoloresCatania agrees with Jackie Goldschneider that Joe Gorga was projecting because of the issues in his own marriage. #WWHL pic.twitter.com/b4ylY4kJM9

Jennifer also commented on Dolores' relationship in an interview in the episode, sharing that Joe was "being a little harsh" when it came to pointing out David's busy schedule as an OBGYN. "But I do get his point," Jennifer said. "I mean, my husband's a doctor, too, but he finds a way to make it."

Dolores responded to Jennifer's statement on WWHL, sharing that "it's not at all" an apples to apples comparison. "But as you see, I was fed up at that point with my friends talking about my relationship," Dolores added. "It's OK for me. When I said the first 10 times it was OK for me, it should have been OK with them."

Want more RHONJ? New episodes air every Wednesday at 9/8c or catch up on the Bravo app.

We'll see the aftermath of this chaotic cocktail party in the upcoming episode of RHONJ. Check out a preview, below.

Dolores Catania Confronts the Ladies About Talking Behind Her Back
Life is better as an Insider
Bravo Insider is your VIP pass to never-before-seen content, exclusive giveaways, and so much more!
Sign Up for Free
All Posts About
Andy Cohen
Dolores Catania
Jackie Goldschneider
Jennifer Aydin
Melissa Gorga
The Real Housewives of New Jersey
Bravo Relationships
Frank Catania
Joe Gorga
Related

We Finally Know Why Dolores and David Aren't Engaged

How Dolores Feels About That Psychic's Prediction About David