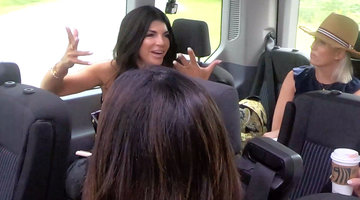 1:58
Preview
Does Teresa Giudice Have a Little Crush on Evan Goldschneider? 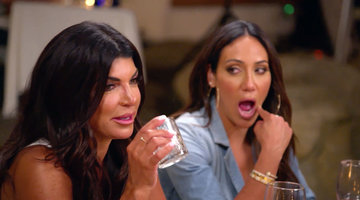 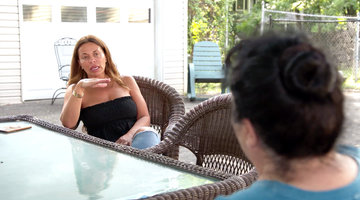 Now Playing
2:10
Preview
Dolores Catania Opens up to Her Mother About Her Relationship With David Principe

Dolores Catania and her boyfriend, David Principe, got real about their relationship in the March 17 episode of The Real Housewives of New Jersey.

While over at David's home, Dolores mentioned to her boyfriend that she was redoing her own house. Dolores asked David if that bothered him because it makes it seem like she'll never be moving in with him. "I know you're not coming here," David said. "I built you this house, everything you wanted, right? And now you're redoing your house."

Dolores noted, "Well, you said we're gonna get engaged when the house was done, and then we didn't," adding in an interview during the episode, "I don't have a ring on my finger. I'm still not moving in."

She then asked her boyfriend why they didn't get engaged when the house was finished. "Because you're just so busy with everything else, and you're all over the place," David explained. "I'm home every night."

Dolores didn't agree with that assessment and told David not to "make excuses" for why he still hasn't proposed. "Don't put it on me," she said. "When you didn't give me the ring, I thought that you weren't serious about this, and it pushed me away a little bit. I don't want to grow apart either."

Though David assured her that they weren't growing apart, Dolores said that they "don't see each other that much." And then when she does come over to his house, Dolores said that David is usually working. David noted how, as an OBGYN, he can't always predict his work schedule. "I'm not complaining about that," Dolores said. "But I'd like to spend a little more time doing things together and living."

David agreed that he "always" misses Dolores and wants her to come over to his house more. "So let's make a pact right now, OK? Let's spend more time together," Dolores resolved. "If you want me here, just show me."

Earlier this season, Dolores opened up to her mom about some recent tension with David after she didn't tell him that she would be undergoing a tummy tuck (clip above). When her mom asked if she was "happy" with David, Dolores ultimately concluded that he's "not a throwaway guy." "I enjoy the time that I spend with him, and I enjoy the freedom I get from him. I've been held down by other men," she said. "He's either working or he's home. That's a nice peace of mind."

Dolores and David are still going strong today. In fact, the New Jersey Housewife recently got "the best surprise visit" from David and her daughter, Gabby Catania.

Want more RHONJ? New episodes air every Wednesday at 9/8c or catch up on the Bravo app.

It looks like Dolores and David's relationship will continue to be a hot topic as Season 11 of RHONJ continues. See what we mean in the below sneak peek.

Life is better as an Insider
Bravo Insider is your VIP pass to never-before-seen content, exclusive giveaways, and so much more!
Sign Up for Free
All Posts About
Dolores Catania
The Real Housewives of New Jersey
Dating
Bravo Relationships
Related

Dolores Has an Update on Frank & David's Relationship

Dolores Addresses If Frank Is Her "Real Soul Mate"