How Did the Top Chef 13 Winner Celebrate? 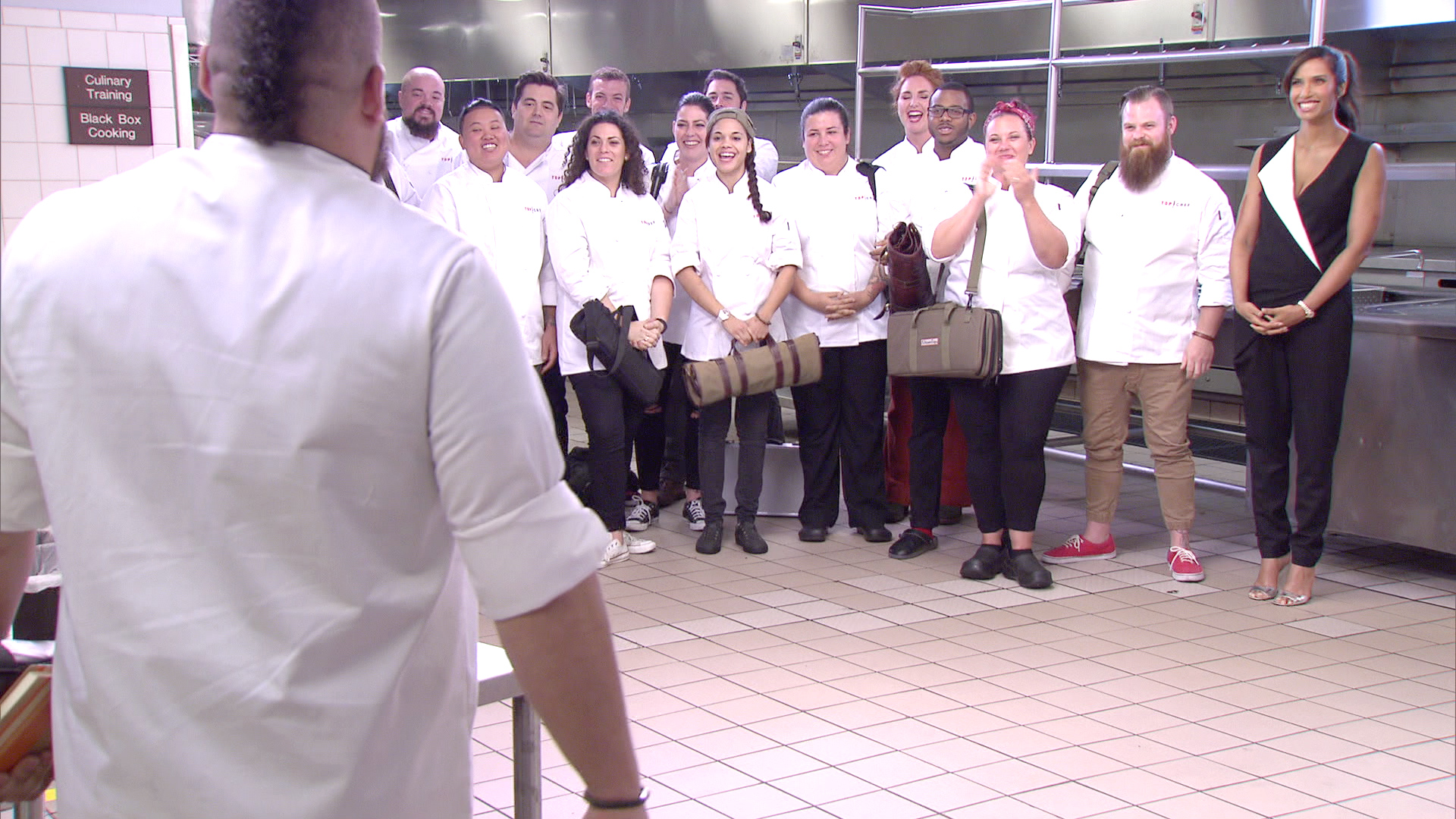 After a season of surprises, intense competition, and way too many crudos to count, the winner of Top Chef 13 was finally revealed Thursday night. In case you still haven't had the pleasure of being on the edge of your seat while watching the grand finale, you're going to want to look away now to avoid any SPOILERS.

Jeremy Ford kept up his momentum from winning the last couple of challenges to take home the top prize of Top Chef. "It's one of the most amazing experiences," Jeremy told The Daily Dish about his time competing in the culinary competition. "For any chefs out there, don't doubt yourself. For a couple of years there, I was like, I'm not ready, I'm not ready, I'm not ready, but no one's really ever ready for Top Chef. There's no preparation to win Top Chef. I think you just have to go and try your hardest."

The Daily Dish caught up with the Top Chef 13 winner the day after the finale aired, and he revealed the secrets of his success, his highs and lows of the season, and how he plans on celebrating his win in the future.

How does it feel to have won Top Chef 13?

Jeremy Ford: It's an amazing feeling. This is a competition that for years and years I've been watching and never really thought I was ready for and then I woke up and [his boss] Jean-Georges [Vongerichten] blessed me to come do this. I had a lot of pressure because Greg [Gourdet] was the runner-up last year and was a JG alum, so I had a lot to live up to. I'm glad I could bring the crown to Jean-Georges.

What was it like when you saw Jean-Georges appear in the finale and then you heard he was going to be your sous chef?

If you see the episode, my face turns bright red. Instantly nervous. I wasn't sure if he was gonna be as involved as he ended up being. I thought he would be a judge. I didn't realize I was gonna get him as my sous chef. It was amazing. It was the coolest, most special moment in my cooking career.

It seems like you both worked very well together, but it must have been kind of weird to have your boss work for you.

Yeah, the weirdest thing was I was writing a prep list, and whenever I write a prep list, I always put a name by who was doing what. It's kind of like a weird format that I do, and it was just weird writing "JG" next to cleaning foie gras, so really cool.

@chefjgv and I tasting our lobster, celeriac aioli, truffle taco for the BEST OF THE BEST TOMORROW:):):) #mentor #topchef #tc13 #teamjcf

At the end of the finale, you spoke about how much it was going to mean to you to tell your daughter that you won Top Chef. Can you tell us about that moment when you told her about your win?

Unfortunately, she wasn't able to come to the trip here in New York. I really wanted her to be here, but I knew that she was in school, and I didn't want to take her out. But I thought it was appropriate to spend the finale with Jean-Georges being that he was such an influential part of, not only the competition but my career, so I felt that it definitely was awesome to be here. For her, all I got to do was a phone call last night.

What did she say when she heard the news?

She went crazy because all season long, she's like, "I knew you won." She's like, "You just won't tell me." She'd always tell her friends that I won. I was like, "Maddie, you can't say that." So she went crazy. She was like, "I knew you won. I told you." She was going nuts. In celebration of this, we're gonna go on a little cruise when we get back.

Your mom, dad, and brother were there for the finale, which you got emotional about during the episode.

You almost did. What did that mean to you to have them there to see you win?

I come from a really supportive family that no matter what I've chosen to do and whatever path I've gone down, they've always been behind me even with the crazy ideas I've had, so it was really special. I got a little emotional because my father wanted me to take over his company 10 years ago. I made that decision to say no and follow my own dreams, and it turned out to really pay off, so it was an amazing feeling.

What was the company that he wanted you to take over?

I come from construction. My brother's his right hand in the company, and he wanted me to take over the company. It was tough at first. He didn't really believe in it. And then, through time and seeing the evolvement, he's really happy, so it's good.

What did you think of Amar [Santana] as a competitor in the finale?

Really, honestly, when I saw him walk through that door after the magic challenge, I was not too excited. He's a very, very focused, flavor-forward, amazing chef, so I knew I was going to have to bring it and really show off not just flavor but technique. And I think that's what put me just slightly over the edge. 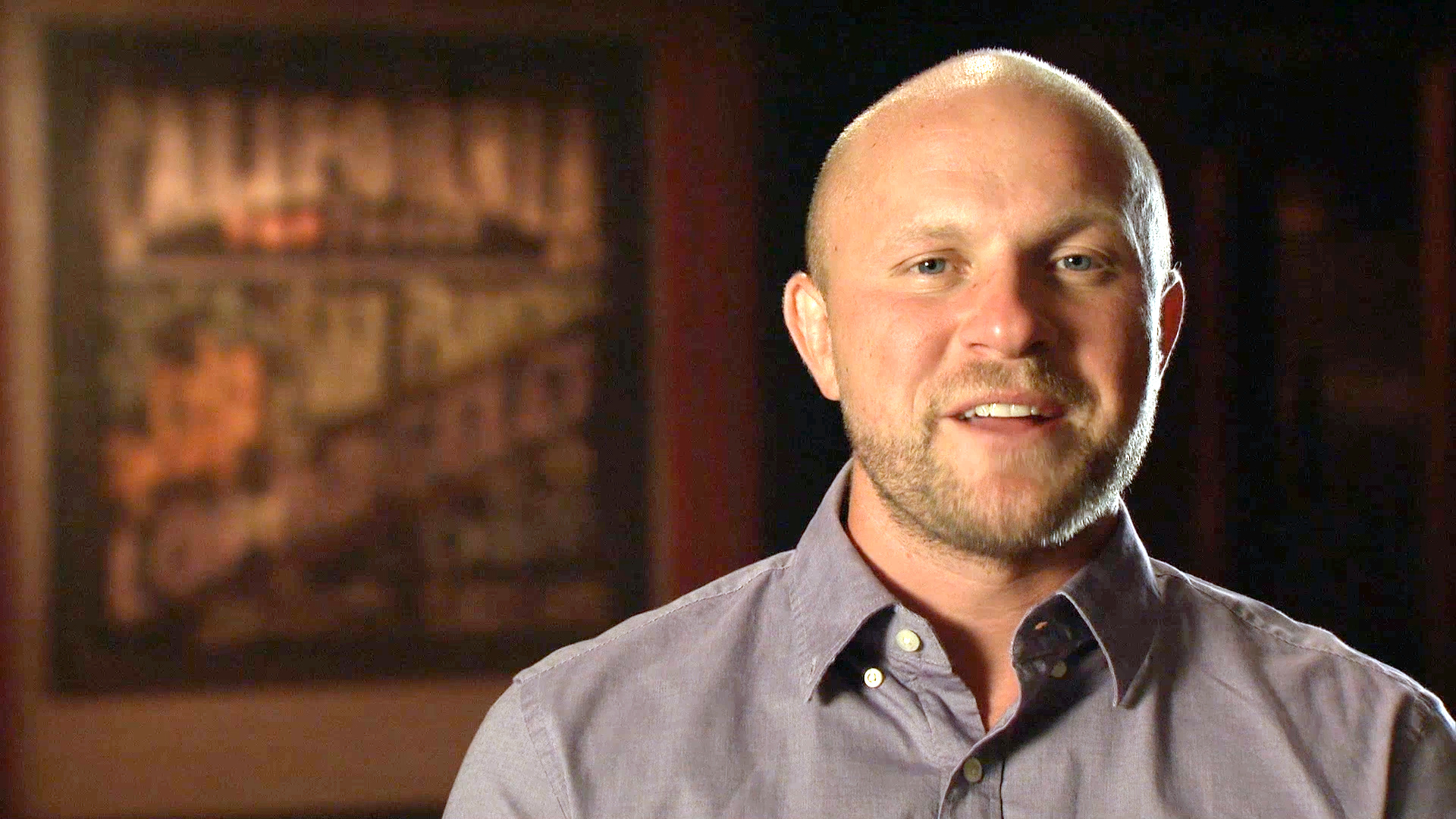 What did you think about Amar criticizing the complexity of your dishes and the number of techniques used during the finale?

He threw a couple jabs at me when we were going through the Judges' Table. I didn't really have anything to say about his dishes because, one, I didn't taste them, and two, we're two totally different styles. I like to be a little bit more technique-driven and make you think for a second when you see something. With him, I think he goes more classically-trained and simple, which there's nothing wrong with. My dishes just happen to be a little bit more edgy.

When you won the first elimination challenge of the season, knowing that past Top Chef winners did the same, did you think you had a good chance of winning after that?

What's funny about the first challenge is, I'm a very seafood-centric chef. The fish quality that I had wasn't what I was used to. Fish for me has to be soigné perfect. I remember staying up all night that night having nightmares about the fish. I'm like, "Dude, I'm gonna get kicked off tomorrow for this fish." And I end up winning it, so I think winning it made me realize don't doubt yourself. Stick with your guns and make a really good vinaigrette. Use your flavor profiles, and you'll obviously win.

So did you ever think you would go on to win the whole thing?

No, never at one point during the entire season did I think I had it. I think there's so many good chefs this season. It wasn't a dramatic season. This was really good chefs battling it out, so there was never a moment when I was like, "Oh, I'm going to smoke these guys." You know, Kwame [Onwuachi] and Carl [Dooley], Amar and Marjorie [Meek-Bradley], there was a handful that are gonna go on to be either Michelin star chefs or highly-acclaimed chefs, for sure.

What was your favorite moment of the season?

When we got to sit and eat dinner with Hubert Keller. That was definitely the coolest moment for me. There's a lot of great moments, but that one in particular meant a lot to me because it was a moment where we actually got to ask a few questions and there's a question that I feel like I always have for chefs, like how do you come up with your new dish? Where do you find inspiration to evolve into a new dish? His response was just magical. That was definitely the best part of the show for me.

The cast of Top Chef 13 got so many amazing opportunities. That, and having Tom Colicchio cook a meal for you. That was just extraordinary.

That was a really good, freaking meal. Yeah, that was amazing, actually. A lot of people see Tom as just a TV guy, but the guy can cook, he really can. There's a reason he has an empire as large as he does because he provides amazing food, simple. 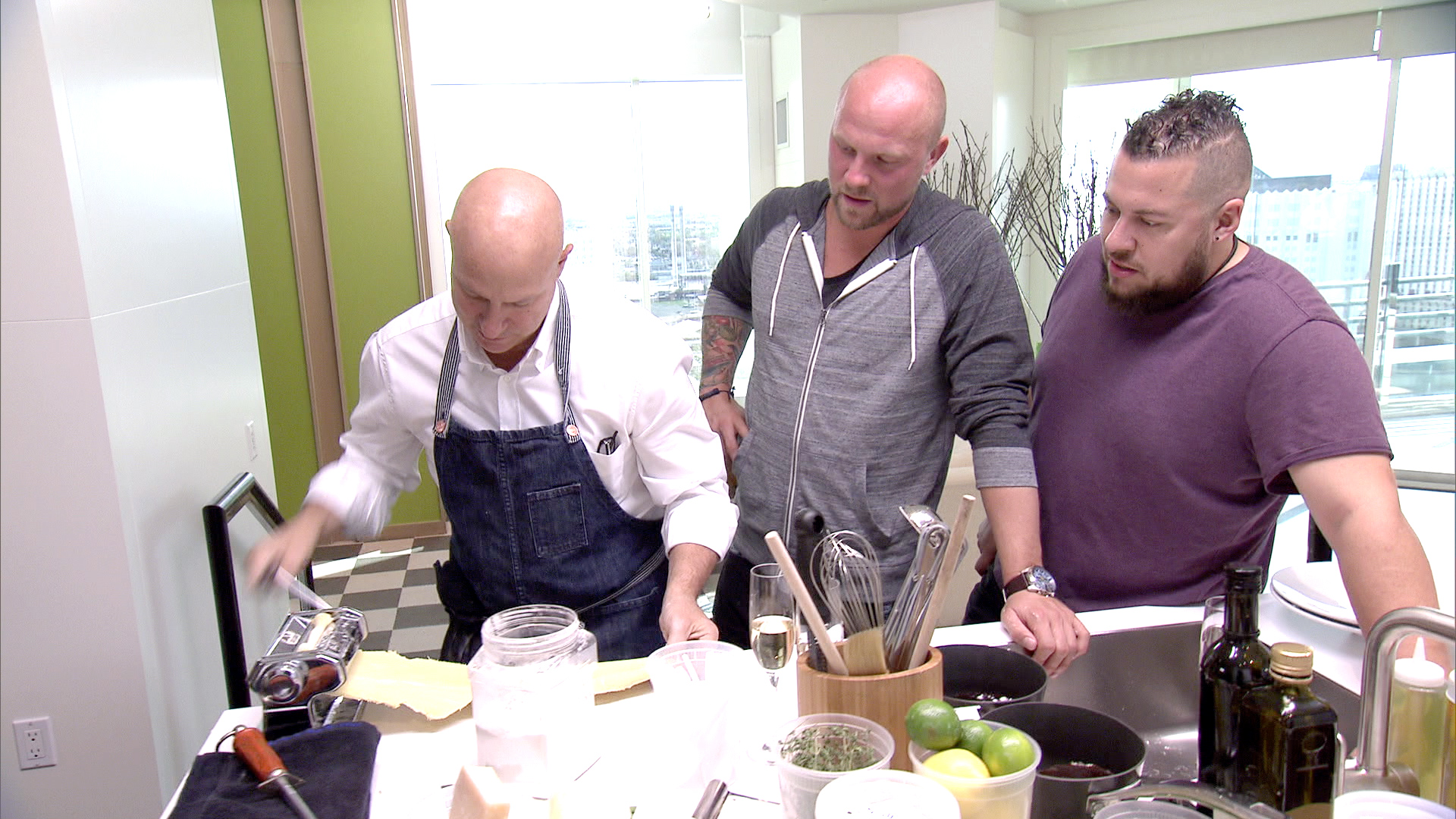 What was your lowest point of the season?

That would be the Taco Dudes. That one was weird. We didn't have much time to come up with an idea. It was really limited mental time to think. I was getting a little burned out. I was getting tired, missing my family, missing home, missing my cell phone, and all the things that you live for. I think at that point, I was just getting burnt. I'm not a fast casual kind of guy. I like higher end, more sophisticated cuisine. And it was just something I threw together, and it was the worst idea ever.

Was it hard to watch your presentation back on TV?

Yeah, you're also put in certain situations where you have an idea and maybe you're not in the right kitchen or the right environment to perform it, so you have to be really selective. That particular dish just wasn't a good idea. It was very painful to watch.

Do you keep in touch with any of your fellow cheftestants from this season?

Not a lot of them more than just a text here and there. But Kwame is a really good friend of mine. Amar I stay in touch with. Chad [White]. Believe it or not, Phillip [Frankland Lee]. Everyone is gracious. We're all busy. We're all spread around the whole country as well.

What has life been like since Top Chef, and how has winning changed your life?

I definitely have a lot more Instagram followers. Just bringing attention to Miami was a huge goal of mine. There's a lot of attention coming there, and there's great chefs and great restaurants opening up left and right. I think the more we bring, the more people are starting to put us on the map. That's what I'm super proud of.

And you're still the Chef de Cuisine at Matador Room. So what else have you been up to since the competition?

Just working underneath Jean-Georges and the team and learning, collaborating, creating new recipes for spring. So that's where we're at right now.

Relive Jeremy's winning moment from the Top Chef 13 finale, below.

Show Highlight
The Winner of Top Chef Season 13 Is... 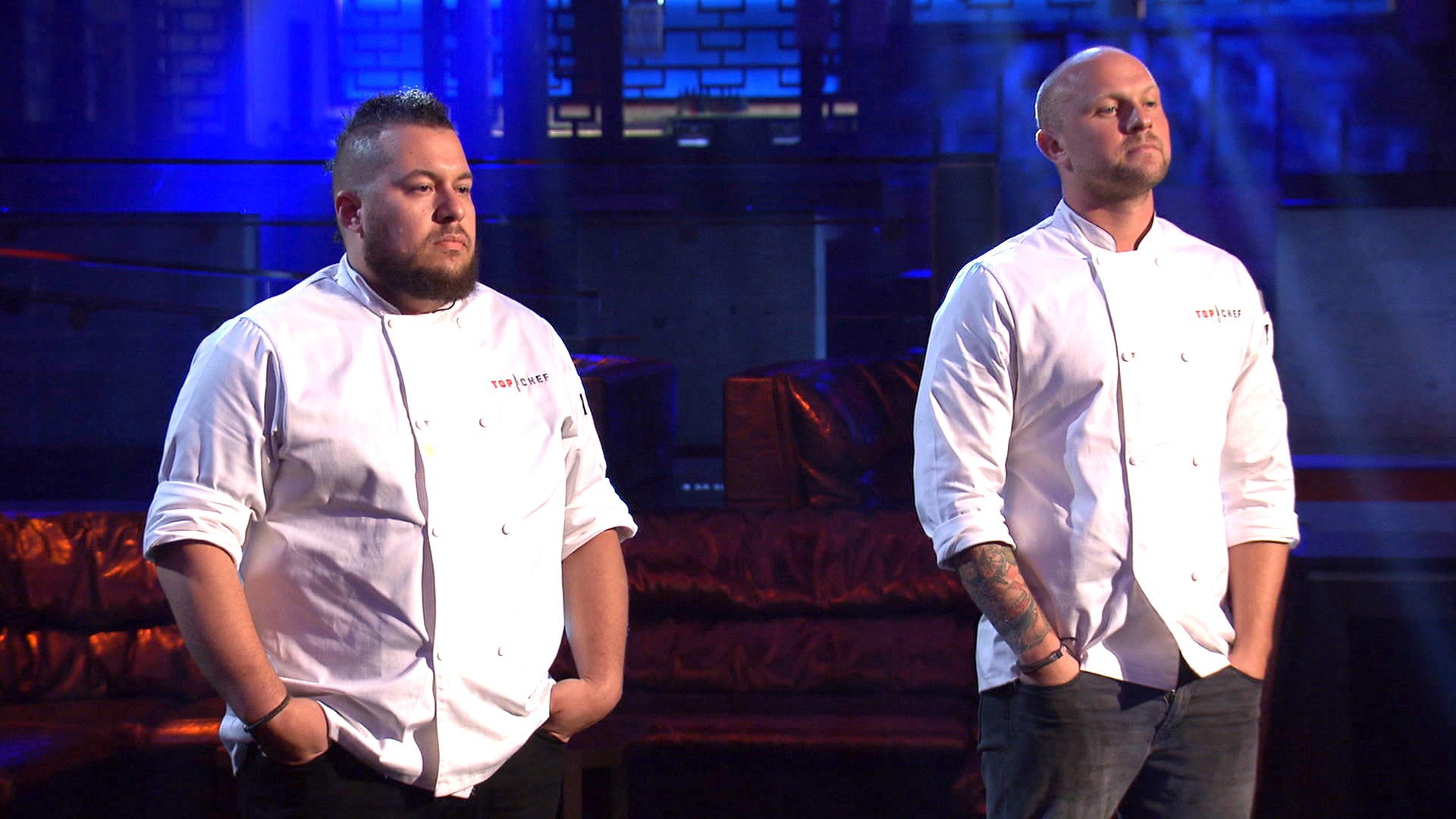