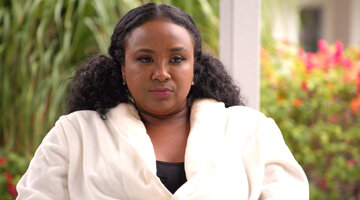 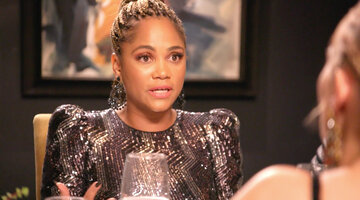 1:25
Preview
Shanique Drummond Is Not Thrilled With Imani Walker's Gift 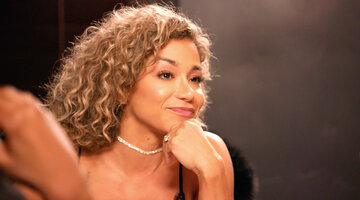 Jazmin Johnson lives her life out loud, as we've seen over the past two seasons of Married to Medicine Los Angeles, but one thing she's more private about is her home life, specifically her marriage. Aside from knowing that he's a successful psychiatrist and how much his wife loves him, Jazmin's husband still remains a bit of a mystery to fans.

But could all of that change in the Married to Medicine Los Angeles Season 2 finale? In a sneak peek of the upcoming episode, which airs Sunday, July 12 at 9/8c, we see Jazmin getting ready to throw a holiday party at her gorgeous house. Amid the festivities, Dr. Britten Cole asks a very important question: "Is Jazmin's husband here?"

Lia Dias responds, "Man of the house? I'm not sure."

Lia shares some other thoughts on the matter in an interview during the episode. "It's strange that you're hosting a party at your house and your husband is not here," she says in the preview.

So, Lia suggests to the other ladies that they should "call out to" Jazmin's husband to get him to appear at the party. We'll have to wait and see if that works.

Jazmin's husband became a major topic of conversation during the July 5 episode of Married to Medicine Los Angeles when Dr. Britten and Dr. Imani Walker expressed frustration over her not sharing as much about her relationship as they do (clip above).

"I tell you guys all the time about how busy he is, how I'm constantly juggling working for his practice, building my own business, and being a new mother," Jazmin explained during a dinner on their girls' getaway to Palm Springs. "He's constantly on his routine, it never changes, and when it comes to doing something new like meeting friends, he's like, 'No, I'd rather just be with y'all.' Is it rude? Yes. Would I like him to be present a lot of the times, especially [Dr. Britten's husband] Mack is there, [Shanique Drummond's husband] Rob is there, [Dr. Kendra Segura's husband] Hobart is there, of course. And at some point, I'm gonna say, 'OK, you've had your time.'"

Jazmin added, "I am gonna try to be open more."

Luckily, we have Shanique to give us a little bit of intel on her bestie's hubby. “I have met Jazmin’s husband on several occasions, whether it’s at house parties, or whether I’m there and he shows up after work. He is actually a really, really nice guy,” Shanique shared during an interview with The Daily Dish podcast in June. “Just really mellow temperament. Even Robert has met him as well. Really nice guy.”

See more from the ladies' trip to Palm Springs, below.

Shanique Drummond Is Not Thrilled With Imani Walker's Gift

Dr. Imani Addresses That Revelation About Her Love Life

Dr. Kendra on How Motherhood Changed Her Marriage