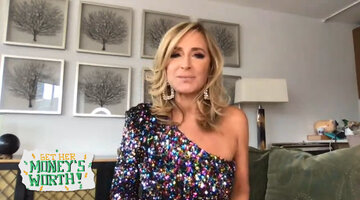 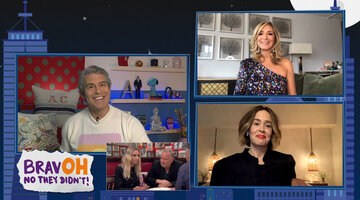 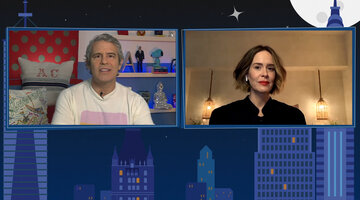 Sonja Morgan dubbed The Real Housewives of New York City ladies' dinner out at a restaurant in Newport the "worst f--king dinner party ever" — and she wasn't kidding. The meal ended with a franchise first when Leah McSweeney tossed a ravioli before exiting the establishment.

"I may feel bad about not being accepted or being judged, but I'm not gonna feel bad enough to the point where I change who I am," Leah added. "I'm still gonna be me."

Sonja revisited that Season 12 moment during the July 9 Watch What Happens Live with Andy Cohen: @ Home After Show (clip above). Andy Cohen read a fan question that asked if Sonja "thought Leah was justified" in her actions at that dinner. "There was a lot that happened with Leah and her sister that wasn't shown," Sonja replied in the above clip. "So by the time the viewers saw me calling them demons or whatever I was saying or they were scary people, we looked really evil. So we got a little flak for that."

Earlier in the show, Sonja's fellow WWHL: @ Home guest and Real Housewives superfan Sarah Paulson also had some thoughts on Leah's freshman season of RHONY. See what she had to say, below.

Check out a sneak peek, below.

Heather Thompson Is Back!
Life is better as an Insider
Bravo Insider is your VIP pass to never-before-seen content, exclusive giveaways, and so much more!
Sign Up for Free
All Posts About
Andy Cohen
Leah McSweeney
Sonja Morgan
The Real Housewives of New York City
Sarah Paulson
Related

Dorinda Reacts to That Outfit Sonja Gave Leah on RHONY

Leah Says Sonja Is the Biggest Pot-Stirrer This Season