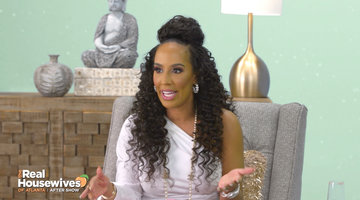 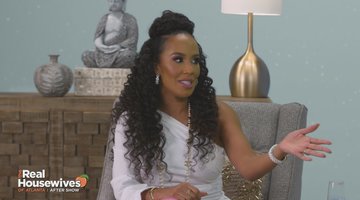 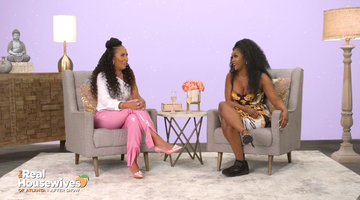 Porsha Williams has worked hard to get her relationship with Dennis McKinley back on track after he was unfaithful to her this season of The Real Housewives of Atlanta. Part of that journey has included attending couples counseling in an effort to get to the root of their issues, including why Dennis cheated, so that they can work toward a solution and move forward in their relationship.

In therapy, Dennis opened up about how Porsha giving birth to their daughter, Pilar Jhena, who turned 1 in March, played a role in his infidelity. However, Porsha said during The Real Housewives of Atlanta Season 12 After Show that she felt like there was more behind Dennis' cheating. "When he told me he cheated because of postpartum depression, I took it and it rolled off my back like water off of a duck's back because, first of all, we still had sex. He was my biggest support system while I was going through it," she explained. "So all of that, I knew that was just something that maybe had a piece of it, but I knew that wasn't the whole reason of why he had stepped out."

Porsha then offered up what she believes were some other contributing factors. "You know, people, when they talk about infidelity, they try to make up these big, big deep reasons, and really what it was could have been that we got together so fast and this chick was still there and maybe I wasn't around and he just went back and made a phone call. It could be really simple; it doesn't have to be that deep," she said. "I think once we kept going to counseling, it came to, you did it because you were selfish, and because it was something you wanted to do. And he found out some things about me that we had never talked about before."

Seeing his fiancée be so vulnerable during therapy really made the gravity of the situation sink in for Dennis, according to Porsha. "He needed to see that he had really, really hurt me and that through seeing me being hurt, he could see that everything I had given him was real and that you are about to throw all of this away," she shared. "So, I think that's when he really got it."

Porsha admitted that she had "a pattern of ignoring some signs" early on in their relationship as there were rumors about Dennis still seeing other women even after they started dating last season of RHOA. "I did have a pattern of even saying out loud, 'Ignorance is bliss. I don't even want to know. I'm just happy with you. We're good. I love you. I don't care about your past. I don't care. I'm not asking all those questions,'" Porsha recalled.

Will Porsha Williams and Dennis McKinley Actually Get Married? Kandi Burruss Breaks It Down

She now sees how she should have held Dennis more accountable in the past. "You don't realize when you're saying all that stuff like that, it lands somewhere, and it was landing with him, probably in a way too, it's like, 'If I do something, I could just apologize,'" Porsha said. "So this was like the first time of me really putting my foot down and getting him to truly understand that we are building a family, and it is serious, it's the real deal, and I will walk away for the sake of my daughter. And making sure that I am sane in my mind and that I could take care of my child."

Porsha and Dennis eventually got re-engaged this season of RHOA, but they were still very much a work in progress by the time the Season 12 finale rolled around. "Porsha and Dennis are spending a lot of quarantine time together... no wedding date has been set," an update at the end of the season finale read. "And Porsha's cookie jar remains closed... sometimes."

Porsha said during the After Show that it's best for her and Dennis to take things slow right now. "I'm just comfortable still figuring it out. I rushed it already. We already did that. We ran the sprint race already. We won that prize," she said. "Now, I'm taking my time, and we are working on us, the relationship as parents, and figuring it out. It's not something that just goes away. He has definitely had to pay his dues with the situation."

This has not been "an easy road" for Porsha and Dennis. However, she said she has found comfort in knowing that there are other people out there who know exactly what she's going through.

And to any haters out there, Porsha is paying you no mind. "Going through this on national TV has also done another thing for me: I don't care what anybody thinks," she said. "I don't care that I'm engaged, and we don't live together and what someone else may say, because you need to do what you need to do for your life, and I'm going to do what I need to do and feels comfortable for me in my family. And that's all I can do."

We'll get the latest from Porsha when she comes together with her fellow Georgia Peaches at the RHOA Season 12 reunion, which kicks off Sunday, May 10 at 8/7c. Get your first look at the drama to come, below.

An Update on Dennis’ Relationship with Porsha's Sister