Sign Up for Free to View
Did This Team Cook Too Much Food for Restaurant Wars? 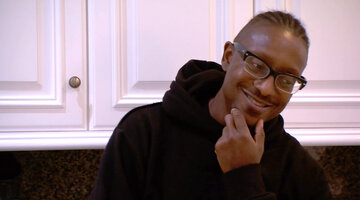 0:50
Preview
The Chefs Gear up for Restaurant Wars 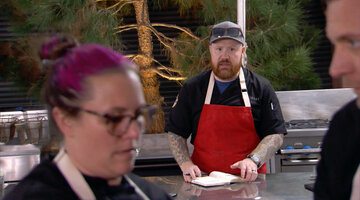 2:13
Preview
One Team Is Feeling "F---ing Awesome" and the Other Team Is Stressed Out 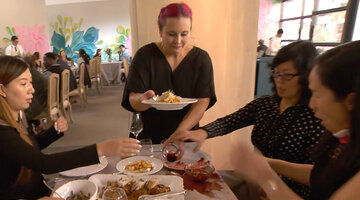 0:38
Preview
Will This Season's Restaurant Wars Be a Disaster?

The May 7 episode of Bravo's Top Chef featured the challenge every cheftestant simultaneously looks forward to and fears the most: Restaurant Wars.

This iconic elimination challenge came with a twist in Season 17. The All Stars were tasked with creating and presenting a concept for their dream restaurant during the previous episode. The judges chose Kevin Gillespie and Gregory Gourdet's concepts to go head-to-head in Restaurant Wars.

So it was Kevin's southern-inspired The Country Captain eatery versus Gregory's Haitian restaurant Kann. Who came out on top, and who was told to pack their knives and go? There are MAJOR SPOILERS ahead about this season's Restaurant Wars ahead.

At Judges' Table, we found out that Kann won Restaurant Wars, while The Country Captain team was in the bottom. As the person who came up with the concept for the restaurant and the executive chef, Kevin expressed to the judges that he is the one who should ultimately be sent home.

"Well, I mean, to be very candid with you, I was raised to stand in front of your mistakes and you own them for what they are. And there have been times when I tried to save my own skin within appropriate, and frankly, I couldn't live with myself if I tried to throw anybody under the bus to save myself," Kevin said during Judge's Table. "I believe that the faults we made today land firmly on my shoulders, whether they were my dish that I executed or whether they were my idea or whether simply, I did not step in and stop someone from doing something that perhaps they shouldn't have done."

After host Padma Lakshmi told Kevin to pack his knives and go, head judge Tom Colicchio told the chef he is "a good man." "I appreciate you guys making what I believe is the right decision," Kevin said to the judges before exiting Judges' Table.

Padma also shared her thoughts on Kevin's elimination on Twitter after the episode, calling him "a class act, through and through."

.@topchefkevin is a class act, through and through

While reflecting on his elimination during an interview in the episode, Kevin shared that his recent battle with renal cancer has made him reevaluate his priorities in life. "When you have to stare down your maker, like when you've actually been through the stuff that I have, you recognize that that's not nearly as important as doing the right things in life. And the right thing in this scenario was to tell the truth," he shared. "The captain did go down with the ship today, and I don't know about you, but I've always admired the captains that have the courage to do that when they could have jumped in the lifeboat."

During an interview with The Daily Dish prior to the Top Chef Season 17 premiere, executive producer Doneen Arquines gave some insight into what makes Restaurant Wars a true Herculean task for the cheftestants.

"The timeline is crazy. [The chefs] are always are saying it takes a month to a year if not more to plan and open a restaurant, which is true. Although more and more now, people are doing the pop-ups, which I think it helps the situation. But it’s just the ultimate pressure cooker," Arquines explained. "It’s a lot of stuff that they’re responsible for. You know, usually in a regular elimination challenge, production handles a lot of the details, and they just have to cook the food and then put it out. But they’re really responsible for a lot more in that challenge. So it is definitely stressful."

Kevin has a chance to get back into the competition in Last Chance Kitchen, which premieres immediately after the latest episode of Top Chef on BravoTV.com and through the Bravo app. See how he fares, below.

Battle Down Memory Lane
Life is better as an Insider
Bravo Insider is your VIP pass to never-before-seen content, exclusive giveaways, and so much more!
Sign Up for Free
All Posts About
Gregory Gourdet
Kevin Gillespie
Padma Lakshmi
Tom Colicchio
Top Chef
Food
Related