You Be Road Runner, I Will Be Coyote

We look back over last week’s episode, we see the challenges of the Teppan style. Mark went home for failing to deliver a show backed up with great food. There always needs to be balance and his Arrows failed to hit the mark.

Clark is a little glum after losing his synchoronized swimming partner, but he is vowing to continue to compete. Did he get a haircut? He looks less Rocky Horror on this episode. 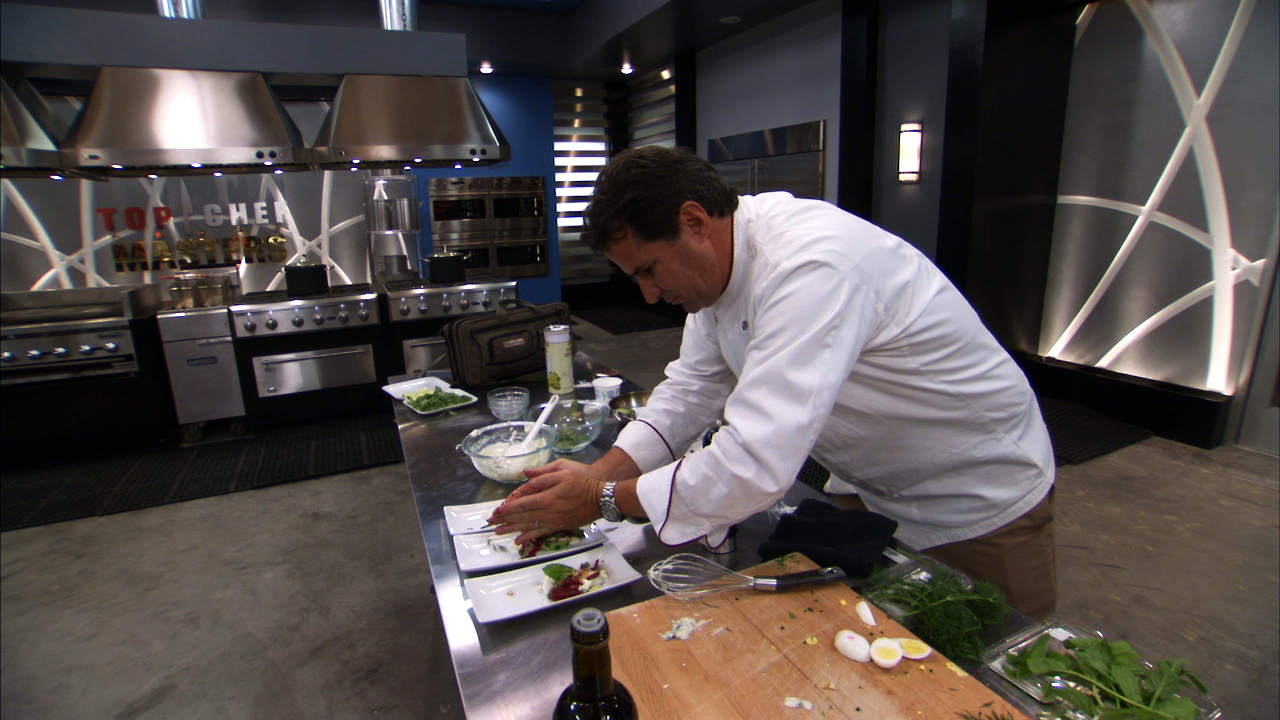 Presented in front of us is a salad bar worthy of the finest Wendy’s. Curtis gangsta raps a B-52s song to explain the rules, ”Here’s your salad bar. It’s as big as a whale. You’ve got 8 minutes to make it set sail.” That man is so lucky he has Adonis good looks, an amazing family, and tons of talent, because the rapping thing is going nowhere.

Eight minutes is not very long to do anything in this kitchen. When we had our speedy fish challenge in Season 3, I took tuna and made very luxurious cat food… I screwed that one up big time. Here’s the deal: It takes three minutes just to fetch what you need from the pantry; three minutes to set up a station to cook, and three minutes to cook… already a minute beyond the allotted time. It’s just not enough to do anything except something really simple. We get it, Art. You lost a bunch of weight. Art, tell us something new. Something not involving Jesus, running shoes, your weight, Lady Gaga or Oprah. Please.

Vinaigrettes are flying and food is made. The B-52s are the guest judges. Curtis was not just having a flashback. Athens, GA in the house. Roam if you want to.

Thierry’s fruit with salad thing is adored. The man in the yellow hat is very happy with these accolades. Lorena seems to have succeeded with her grilled cauliflower salad. Takashi’s salad literally just looks like a trip to the salad bar. Curtis likes the yuzu dressing though. Clark’s modern deconstructed salad gets some tangy comments. Art’s soup and salad is a bit strange and is half enjoyed. The soup is the sad side. Chris has made a chopped salad thing that gets “underdressed” comments. Chris, ever the diplomat, thinks this comment is “bullshit.” He may be right. Onwards. They like Kerry’s salad. It’s earthy. Patricia’s salad gets high marks for the crispy noodles, something chic in food when Love Shack was topping the charts.

Plating-wise I would have given it to Clark and Kerry with Chris a close runner-up. That’s all I can judge on because I did not taste the food.

Lorena, Kerry, and Thierry are the tops. Lorena wins the contest and gets immunity. Kerry is peeved. Lorena’s charity gets some Lexus yen. Alliance for A Healthier Generation is a CIA black ops program run through Taco Bell. It tries to get the younger generation to covertly eat better when they have the munchies.

Louise Benson is the chairwoman of the Hualapai tribe in Arizona. I like the fact that they are paying homage to the Native cultures of the area, of which there are many. Not sure if that’s going to make up for 500 years of being total dickheads to them, but hopefully it’s a start. The photos from the Hualapai’s more recent history of farming in the desert are totally inspiring. Also inspirational is Art. Did you know he lost 800 pounds in the last month?Off to the friendly skies… we are boarding schmancy helicopters to the Hualapai reservation. This should be beautiful. The choppers are super cool. They fly an amazeballs flight to the reservation, over the Hoover Dam, and basically into the Grand Canyon. My best view of this same vista is when I am in the middle seat and the captain interrupts my episode of Big Bang Theory, that I have seen three times already, to tell the whole plane that the view of the Grand Canyon is spectacular today. I see nothing because the window person next to me is asleep with the shade drawn and I have personal rules of engagement/ boundaries with sleeping people.

“Standing on the edge of the Hoover Dam

I'm on the centerline

Right between two states of mind

And if the wind from the traffic should blow me away”

Takashi is afraid of heights and with helicopter rides and mountain tops on the agenda, his predicament gets a lot of airtime. He is quoted saying that he gets scared changing the light bulb. Does this mean he has the same idea all the time? The glass-bottomed walkway they have to traverse would freak me out, and I am fine with heights. Anyone else notice that they all have strangely designed shoe coverings on?

The dance partners are as follows: Chris and Patricia doing the frenetic polka with Rabbit/Squash. Art and Gidget doing the excitable bunny hop with Quail/Prickly pear. Thierry and Takashi dancing cheek to cheek with Venison/Yucca flower. Clark and Kerry are doing an uncomfortable slow dance to "Stairway to Heaven" (such a long song for an agonizing slow dance) paired with Beef/Corn.

Kerry and Clark are not having any fun, though their pairing is by far the easiest when it comes to thinking on-the-fly cooking. I mean corn and beef are like strawberries and cream on the pairing charts. I would much rather get those ingredients than the yucca flower, something I have never cooked before. But regardless of their smoothly-paved road to success, they are bickering like fourth graders. Clark is refusing to have a fist fight though, to the chargin of all regular TV-watching Americans. All in all, the cook-through goes well, save for crappy flames to cook on and some rain at the top of the mountain. It really is beautiful and as the diners advance, we see many generations of Hualapai at the table, with some very white T.V. judges and hosts. James never wants to leave. Art and Lorena give a very long speech talking about how they love each other. It’s pretty sappy and is causing much anxiety for the other chefs as they watch their product chill down.

These are the vittles:

Takashi and Thierry have well with the venison. They have acted as a great team and put vittles on the plate. I also love venison.That yucca was a challenge to figure out, and even though he didn’t remove the tough, fibrous outer shell, Thierry is getting pretty good marks for doing something edible with it. That’s what we’re after: edible.

Art and Lorena’s quail is overdone but the sauce and the slaw may save it. There is a lot of love on that plate, but that doesn’t mean you’d want to eat it. As their food is being talked about, they decide to sit on boulders and stroke each other's egos.

The judges are all over the place on Kerry’s part of his contentious course with Clark. The salsa verde is “raw, striking… I like it.” The other sauce is separated, but James loved the bitterness. Back and forth we go but like a flower in “Love me, Love Me Not” this has to end somewhere, and it results in this foreboding line: “Clark and Kerry did not come together as a team in terms of texture.” This strange haiku is from Ruth... strange and ominous. Sidenote: I hire a contractor who cleans our hood vents in Athens. She looks a lot like Ruth. She is also in a metal band. Ruth should join a metal band.

Rabbit and bits is another success for Chris and Patricia. Both of them, but especially the offal guy, are proving to be quite the competitors. The rabbit is well-cooked, the squash is well-presented, the flavors are clear, and the whole animal was used. They area good team.

Everyone dances off the mountain.

The tops are Thierry/Takashi and Chris/Patricia. Team TT win. They split the loot and there are some happy charities somewhere in America.

Bottoms are everybody else and Clark joins Mark back to Maine. Go to Arrows and eat some food sometime. You will enjoy.

I bid you adieu.