Sign Up for Free to View
Tom Colicchio Takes on the Wood Fire Elimination Challenge! 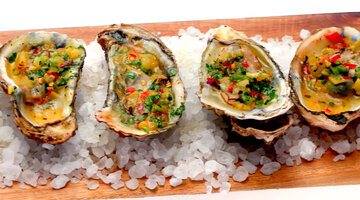 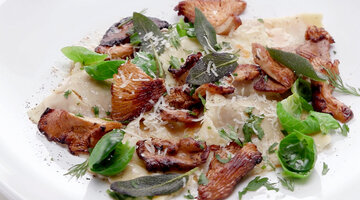 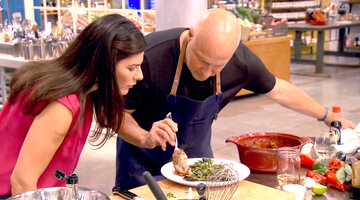 Week after week on Bravo's Top Chef: All Stars L.A., the cheftestants are faced with Quick Fire and elimination challenges that force them to think outside of the box, testing far more than just their basic culinary skills. In the What Would Tom Do? episodes above, head judge Tom Colicchio took on six of the most unique challenges from this season so far and shared what he would have done if he was the one competing on the show.

As seen in the videos, with help (and hilarious commentary) from Nilou Motamed, Tom not only faced the challenges head on, but absolutely nailed them to create mouth-watering meals. Scroll down for each of Tom's incredible dishes and watch the videos above for a step-by-step guide on how to prepare them at home!

The season's premiere episode featured the contestants tasked with cooking seafood on the beach using fire as their only source of heat. In his own take on the challenge, Tom opted to make grilled oysters with compound butter. The meal got the seal of approval from Nilou, who declared:  "You got so much flavor."

"If you're gonna eat your veggies, might as well mix them with pasta," Tom said of his dish when taking on the challenge of creating one of six courses in a progressive vegetarian menu using fresh produce.

After Tom's eggplant relish "became an instant hit at home," he decided to whip it up when taking on the challenge of creating a signature specialty product and building a dish to highlight it. To complement the relish, Tom added roasted eggplant and lamb chops, but noted it could "go on a lot of different things."

Sea Trout with Lentils and Cabbage

Challenged to recreate a restaurant meal guided only by Nilou's description over the phone, Tom got to work on the fish dish she detailed. Ultimately, as seen in one of the videos above, he was successful. "I feel like this dish is a real testament to my powers of description," Nilou said. "And your powers of cooking."

"I know that beets are inherently sweet, radicchios are inherently bitter. So I thought this was a really cool way to highlight these flavors and ingredients," Tom said when creating a roasted beet, artichoke, and radicchio salad when taking on the challenge to highlight two flavor profiles in one cohesive dish.

On a recent Top Chef episode, the cheftestants were responsible for creating one of six courses in a progressive kaiseki meal. Although Tom noted in a What Would Tom Do? episode above that he's "not a Japanese chef," if faced with the same challenge, he would "take those Japanese ingredients and use them the way I would cook." Although varying slightly from his usual culinary choices, Tom explained of the final meal: "I've done a version of this crab and uni dish for probably 20 years now."

Watch the videos above to see Tom take on each of the unique challenges!

Life is better as an Insider
Bravo Insider is your VIP pass to never-before-seen content, exclusive giveaways, and so much more!
Sign Up for Free
All Posts About
Food & Drinks
Tom Colicchio
What Would Tom Do?
Recipes
Related

Tom Colicchio Shares a Peek at His Long Island Property