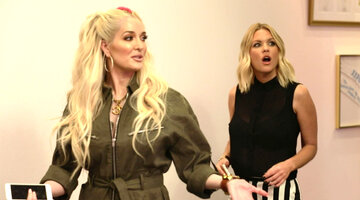 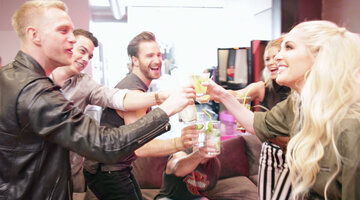 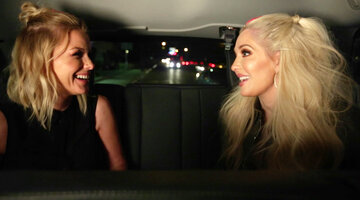 As you've seen from her exploits with Tom Schwartz and Tom Sandoval, Carrie Keagan isn't afraid to have a good time. The Bravo After Hours host will push almost any boundary in the name of fun — and we totally love her for that. Over the course of her wild career, the TV personality has made a name for herself thanks to her uncensored approach to getting celebs to spill all the tea. Have we officially piqued your interest? Here's everything you need to know about Carrie.

1. She Has a Potty Mouth

"I am a professional curser," she revealed. "I am a Grandmaster of Coprolalia, which comes from the Greek 'kopros' meaning feces and 'lalia' meaning to talk, do the math!"

"I once spanked Sandra Bullock on camera," she said (yep, there's a Tweet to prove it), adding, "And have been nicknamed 'Barbara Walters on acid and Red Bull.'"

"I am an entrepreneur and co-founded one of the most successful YouTube networks: NO GOOD TV. I was one of the original 'YouTube Sensations' before there was such a thing," she said. "And I recently hosted my own morning show on VH1 for three years called Big Morning Buzz Live with Carrie Keagan. I’ve been hired by TV networks for my infectious laugh and I’ve been fired by them because my boobs were too big."

I met this beauty today @mashable She is perfect and a rescued dog from #humanesociety She has nothing to do with why I was there...and I only tell you this now because you'll ask me when you see the story I filmed for them coming out soon. #cringe

"I fight for women’s rights and against animal cruelty," she said.

Carrie's book cover is as colorful as her personality.

Her book, Everybody Curses, I Swear!, is due out in January 2017 — and she isn't holding back inside the pages.

"You should expect non-stop, jaw dropping insanity laced with hilarious potty-mouthed depravity!! Over the last decade I’ve conducted some of THE most outrageous, no-holds barred interviews you could ever imagine with THE biggest stars in the world. My sit downs have amassed well over two BILLION views online. My book brings to life all of the crazy behind the scenes stories from my incredible experiences as well as some of my most unbelievable interviews. There are over 500 celebrities featured in the book including A-listers Will Smith, Jennifer Lawrence, Chris Pratt, Jennifer Aniston, George Clooney, Sandra Bullock, Melissa McCarthy, Matt Damon, Emma Stone, Ben Affleck, Kristen Stewart, Denzel Washington, and Robert Downey, Jr., to name a few, talking about the most intimate and unbelievable topics. Together, we pushed almost every boundary there is, thanks to our mutual love of profanity! I have never laughed so hard and I promise that what they said will blow your mind. In fact, if you want to know your favorite celebrities favorite curse words, look no further than my book. Plus, I’ll teach you a few new swear words to add some more color to your life from the over 1,100 different curse words featured in the book."

Her feed is non-stop fun to scroll through.

"It was surreal but a total blast! It’s a fun show," she said of the upcoming season, which will also feature Kyle Richards and Porsha Williams. "I was a kid in a candy store just taking it all in. Obviously, I’m not allowed to say much but, for me, the entire experience of being on the show was, in a funny way, a lot like going to a nude beach for the first time. It’s a thrill to be invited and you’re all sorts of excited and anxious about going and experiencing it but as the day comes closer, you find yourself getting more and more nervous. Then when you get there and it’s time to 'drop trou' and put all your bits and pieces out there for the world to see, you feel very vulnerable. But then after a little while you realize that everyone’s bits and pieces are swinging in the breeze so you calm down and just go about your business. Who knew being naked could be so much fun! I had a great time. Arnold was great but all I could see was Dutch from Predator! I loved that movie!!"

Check out more from her night out with the Toms, below.

Bravo After Hours: Tom Sandoval and Tom Schwartz, part 3
Life is better as an Insider
Bravo Insider is your VIP pass to never-before-seen content, exclusive giveaways, and so much more!
Sign Up for Free
All Posts About
Tom Sandoval
Tom Schwartz
Related

Sandoval Reveals His Most Frequent Walk of Shame