Sign Up for Free to View
Lisa Vanderpump Gives an Exclusive Tour of Tom Tom! 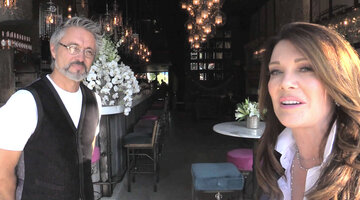 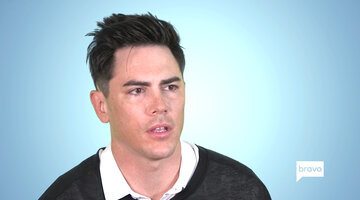 1:38
Vanderpump Rules
Is Tom Tom Any Closer to Opening Up? 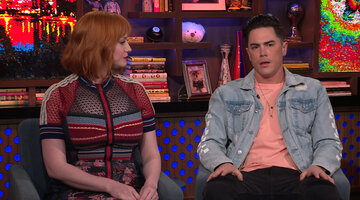 0:42
Watch What Happens Live with Andy Cohen
When is TomTom Finally Opening?

After so much prep work, so much buzz, and some pre-opening fanfare, Tom Tom is officially opening its doors this week. Yes, Tom Schwartz and Tom Sandoval's new West Hollywood restaurant and bar with Lisa Vanderpump and Ken Todd opens to guests on August 9. And with opening week in full swing, I scored an invite to the "friends and family" night on August 6 — which meant I got to finally get inside and see (and taste) what the Vanderpump Rules besties have been laboring over, and hyping, all this time.

I'd already caught a glimpse of the bar's interior — including its gorgeous bar backdrop with moving clock mechamisms — when I'd covered the red carpet at Tom Tom's soft opening party with the Daily Mail last month...

...but on this visit, I headed straight past that opulent front room into the back patio to find my table. That's a spectacular alfresco space that Schwartz had previously described to me aptly as the "hanging gardens of West Hollywood" — think rustic seating, a grand fireplace, crystal chandeliers suspended by chains above the open-air space, and succulents everywhere, with views of the iconic Pacific Design Center as well as West Hollywood Park. But you know what's even prettier — or, you might say, at least as Instagram friendly? The drinks.

As you might expect, the cocktail list includes a selection of super-colorful and ever-Instagrammable potions, which all come served in fancy cut crystal with stunning garnishes. Since the Toms talked me up last month about a cocktail made with Absinthe, fresh lemon, pineapple, and habanero crystals... that was naturally the one I had to try first. The verdict? So good, so spicy — and served with a mini red rose garnish, so extra pretty, too.

Fun fact: On the final menu, this drink ended up with the name "Toulouse Your Mind," though the Toms originally planned to call it the Simon Phoenix, or the Radiant Child.

Tom Schwartz and Tom Sandoval Reveal Secrets About Tom Tom's Menu: "We Shouldn't Even Say What's in There..."

It was kind of a blur of colors and flavors from there — servers kept the drinks coming at a clip for folks to try them all — but another standout for me was the "Madame Butterfly." That's a purple drink made with vodka, fresh lemon, butterfly pea tea, and champagne — and topped with an edible flower that resembled butterfly wings. Stunning. But can we talk about the food? I wasn't sure what to expect, given so much emphasis on the cocktail program — and given that I'm a longtime vegetarian, so I often miss out on trying venues' signature dishes. But I was very pleasantly surprised on both counts, and the food was honestly beyond what I'd imagined. Turns out, about 70 percent of the menu is actually vegetarian. And the first dish that came out (which I'm pretty sure was actually vegan) turned out to be the best thing I'd eat all night: spicy cauliflower "wings" — Tom Tom's take on buffalo wings — beer-battered tempura style, with brown sugar citrus glaze, sesame, and scallions. Epic. If you eat one dish at Tom Tom, make it this.

But I'd say my second favorite dish on the menu was the "Impossible Burger." For the uninitiated, that's the super-buzzy brand of vegan burger patty meant to really resemble the characteristics of meat in all ways. Tom Tom's version is very California, topped with caramelized onion, vegan jalapeño aioli, crispy jalapeño, radicchio slaw, and avocado. So salty, so crispy, so umami — ugh, so good.

Now, do you want to know a secret-menu dish that tops them all?

Well, that would have to be the "Tom Sandwich" — but it's extremely coveted, and its availability is not guaranteed.

Life is better as an Insider
Bravo Insider is your VIP pass to never-before-seen content, exclusive giveaways, and so much more!
Sign Up for Free
All Posts About
Food & Drinks
Tom Sandoval
Tom Schwartz
Tom Tom
Food
Food Reviews
Restaurants
Travel
Related

Here's the Secret to Getting Into New Hotspot Tom Tom