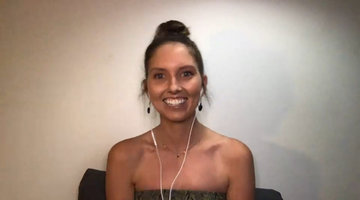 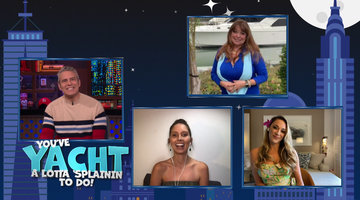 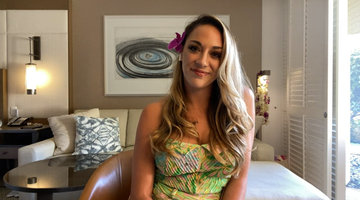 In a season of Below Deck already full of memorable charter guests, one has come to stand out among the rest: Delores.

Delores made quite the impression on the Below Deck crew right from the start after climbing aboard My Seanna in the January 4 episode as she got the party started on the yacht. That continued into a Great Gatsby-themed dinner that Captain Lee Rosbach also attended at the request of the charter guests.

However, it was what happened after dinner that night that has earned Delores a place in Below Deck history. She disregarded Captain Lee's orders and jumped into the water for a night swim. Captain Lee then became the angriest we've ever seen him and threatened to end the entire charter early. The My Seanna crew even kept watch outside of Delores' cabin that night to make sure there were no further antics from the charter guest.

Once Captain Lee had some time to calm down and think, he ultimately decided that Delores was the only charter guest that needed to leave the yacht after her behavior the night before, and her friends agreed. Though Delores seemed to take Captain Lee's decision well on her way back to the dock, her exit ended up being as dramatic as one would expect from the charter guest, getting one last dive off the tender into the water on her way out.

Of course, everyone has been talking about Delores this season, even before we saw her full plunge on Below Deck, from fans to the My Seanna crew to Captain Lee to Kate Chastain. We've even gotten to hear how her friends really felt about her having to leave the charter early. But now, we finally get to hear from Delores herself.

Delores appeared on Watch What Happens Live with Andy Cohen on January 18 and addressed her behavior during that Below Deck charter. "You know, the water was just beautiful. I don't know what to say, it was calling my name," she explained in the above clip. "It was warm, it was lovely, and I felt the need to bond with the ocean."

Delores also revealed whether or not she felt like she owed Captain Lee an apology (Captain Lee confirmed on Twitter on January 12 that he has yet to receive "a genuine apology from Delores").

One thing that Delores did seem to regret from the charter was the fact that My Seanna crew members had to keep an eye on her cabin the entire night after she jumped into the water. "I feel bad for that if that's the case," Delores said on WWHL.

She also had no hard feelings about being asked to leave the charter early. "When I went back to my room, I had already started packing because I was gonna call a water taxi to leave the same day anyway," Delores said. "So I think we were all on the same page there."

When Andy Cohen asked Delores if diving off the tender was "one last eff you to everybody," she replied, "Water is just stunning and beautiful, and I was on vacation and wanted to be in the water."

Delores ended her appearance on WWHL with one final message to any critics out there: "My bad. My bad. Sorry to all the haters 'cause I like to swim."

So, what did Captain Lee think of what Delores had to say on WWHL? When one fan tweeted to him, "Oh Dolores!!! You handled that so well," Captain Lee tweeted in response, "Said no one ever."

Watch Captain Lee and the rest of the My Seanna crew break down that infamous night with Delores in the Below Deck After Show.

Captain Lee Rosbach Relives the Moment When Charter Guest Delores Defied Him and Jumped Into the Water
Life is better as an Insider
Bravo Insider is your VIP pass to never-before-seen content, exclusive giveaways, and so much more!
Sign Up for Free
All Posts About
Andy Cohen
Kate Chastain
Lee Rosbach
Below Deck
Related

Captain Lee on Delores Jumping in the Water — Again