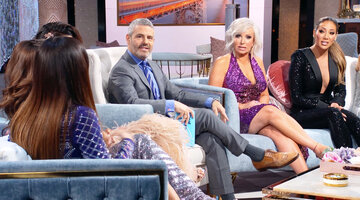 1:57
Preview
Jennifer Aydin Accuses Melissa Gorga of Being "Too Self-Absorbed" to Ever Have Another Child

During the last season of The Real Housewives of New Jersey, Dolores Catania’s relationship with longtime boyfriend David Principe was certainly a hot topic. Dolores’s ex-husband, Frank Catania, was concerned that David was showing a lack of commitment, and the couple eventually paused their plans to move in together. So where do Dolores and David (and Frank) stand today? The mom of two recently shared an update, proving they’re having a great summer all together.

In an August 23 Instagram post, Dolores shared a golden hour selfie with David as the pair spent some time at Seaside Park Beach at the Jersey Shore. The couple was all smiles, and Dolores captioned the post, “The doc.”

In an Instagram Story posted that same day, Dolores shared another look at how the couple has been spending their down time this summer. “Sundays down the shore,” she captioned a photo of David and Frank standing together on a dock with some jet skis. It looks like they’re having a fantastic summer!

Frank and David clearly have a great friendship. During the RHONJ After Show, which you can check out in the video, below, Frank opened up about their “bromance.”

“I gotta be honest with you, David came around and I wasn’t really sure what to expect. David and I are not from the same mold,” he said. “As time has gone on, me and David have become much closer and closer.”

Frank Catania Opens Up About His Budding Bromance With David Principe
Life is better as an Insider
Bravo Insider is your VIP pass to never-before-seen content, exclusive giveaways, and so much more!
Sign Up for Free
All Posts About
Dolores Catania
The Real Housewives of New Jersey
Bravo Relationships
Frank Catania
Related
Style & Living

Dolores Shows the Hurricane Damage Outside Her NJ Home