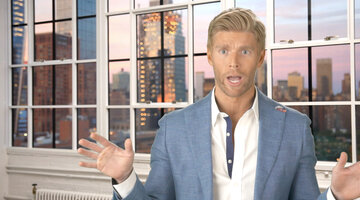 This season of Summer House was definitely the steamiest one yet. There were hookups of all different levels and in all different kinds of locations (some of which didn't even involve anyone in the Summer House crew), new romances blooming, and other couples reaffirming their commitment to one another.

But whenever the heart is involved, drama tends to follow closely behind. This summer was also one full of chaos and confusion for the roomies as they tried to define their relationships, got candid about their love lives, and had deep conversations about the future.

So, which romances were just summer love, and which lasted after Labor Day? Find out, below.

This was Kyle Cooke and Amanda Batula's first summer as an engaged couple after he popped the question during last season's finale. However, these two seemed less like newlyweds and more like an old married couple at the start of Season 4.

Luckily, Kyle and Amanda worked out their issues and were as solid as ever as the season went on, even looking at wedding venues in New York City. By the end of the season, the couple had finally set a wedding date: September 25, 2020.

But we have yet another update on Kyle and Amanda's highly-anticipated nuptials. The Summer House couple revealed during an Instagram Live chat with The Daily Dish podcast co-host Erik J. Mac on April 29 that they have actually moved their wedding up a week to accommodate Kyle's mom's high school reunion, which is the same weekend as their original date. "We were able to move it up so that she could do both," Amanda said.

Amanda added that she was happy to reschedule things for her future mother-in-law. "We've got to start out on the right foot," she shared.

Kyle and Amanda are currently self-quarantined together in their New York City apartment amid the coronavirus (COVID-19) pandemic. Kyle said during the Summer House Season 4 reunion on Watch What Happens Live with Andy Cohen: @ Home on May 6 that though it has been filled with "ups and downs," it has overall "been great."

Amanda also noted that their sex life had "improved before quarantine." However, both she and Kyle admitted that living and working together full-time has its challenges. "We're working together and living together, and there's just absolutely no separation from our work life to our relationship," Amanda said. "It's just us 24/7."

Well we didn’t scare him away... yet 🖤 #summerhouse #murdermystery

When Season 4 of Summer House began, we thought Lindsay Hubbard and Carl Radke might be the couple to watch. But when it became clear that perhaps they were better off just staying friends, Lindsay decided to get back into the dating game, and when she did, she found Stephen Traversie.

Things between Lindsay and Stephen heated up pretty quickly to the point where he didn't hesitate to call her his girlfriend. He even kept his cool when he met two of Lindsay's exes, Carl and Everett Weston, at the summer house. He's a keeper, if you ask us!

Lindsay said during the reunion that she and Stephen are still going strong, and self-quarantining during this time has even brought them "closer together." But what wasn't so easy for Stephen was watching Lindsay's fling with Carl play out earlier this season of Summer House. "Watching it back, no guy wants to see their girlfriend making out with another guy. That's just the end of it. So that was obviously, you know, difficult for Stephen," Lindsay explained. "But we got through that, and he has a full understanding that Carl is just a friend."

She went on to say that Stephen was ultimately understanding of the situation. "He was just like, 'Look, the past is the past. I understand this is your best friend, and it's all good,'" Lindsay recalled during the reunion. "I think it helped that I never fully had sex with Carl because no guy wants to picture that."

Lindsay's friendship with Carl is also better than ever now. "It definitely challenged our friendship, and I think we're in a much stronger place," Carl said during the reunion. "That sounds kind of cliché, but four summers in a row with her, I think we're probably the tightest we've ever been."

It wouldn't be a season of Summer House without one final surprise. In the penultimate episode of this season, it was revealed that Carl and his ex-girlfriend Danielle Olivera had hooked up again that summer. They even got in a good makeout sesh at the final party of the season.

And apparently that wasn't the last time Carl and Danielle would lock lips. Danielle confirmed during the reunion that she and Carl made out again after the summer ended. "He gets a bit chatty sometimes. He gets worked up at a bar, and sometimes the best way to kind of put it on mute is to just grab his face and make out," Danielle explained.

Carl and Danielle are still just friends and have not officially rekindled their romance. However, Carl said during the reunion that out of all of his exes on the show, he wishes he could have made things work with Danielle the most, partly because she's the only one he "actually did have sex" with. "Danielle and I are still really good friends," Carl added. "I love the girl. We get along."

Aside from having her sex life put on blast, Danielle said she would have to agree with Carl's statement. "I love Carl, so if we could do it all over again, it probably would have worked out," she shared.

Jules Daoud's relationship with Jordan Verroi put her spot in the Summer House in jeopardy this season. But things seemed to go a lot more smoothly between Jules and her Hamptons housemates after the two called it quits and Jordan left the house for the season.

But before they split, Jules and Jordan did actually end up doing the deed, she confirmed during the reunion. "We did actually have sex after our date in the city. He was finally able to park the car in the garage," she revealed. "But did he ever satisfy me sexually? I mean, the answer is no."

So it may not come as much of a surprise then to hear that Jules "absolutely" regrets having sex with Jordan in the first place.

After Jordan's departure, Jules found some comfort in Southern Charm's Craig Conover, who attended one of the Summer House parties this season, along with Shep Rose and Austen Kroll. Craig shared during an Instagram Live chat with The Daily Dish podcast host Megan Segura that he and Jules still keep in touch today.

“I spent the summer in New York, so Jules and I hung out for a couple of weeks and then, whenever I was in New York, we hung out. We just had a great time and we’re still close friends,” he said. “Jules and I are still really close. If I go to New York, we’ll probably hang out. But you know, nothing serious.”

Hannah Berner Makes Out With Luke Gulbranson by the Pool

If you were just as confused as we were by what exactly was going on between Hannah Berner and Luke Gulbranson this season of Summer House, things became much clearer during the reunion — well, for the most part.

He then clarified that he loves Hannah, in that he cares "about her deeply," but he's not in love with her. "No. In love and love are two different things," Luke explained. "I can't sit here and be like, 'I'm in love with Hannah,' but I love Hannah dearly."

Hannah opened up about why she doesn't see herself being in a relationship with Luke. "I think there's a difference between chemistry and compatibility. He wanted to talk all the time on the phone and FaceTime and hang out but not have sex. And I only can do that for so long," she shared. "I think, ultimately, I got a little bored. I love him, I care about him, I think he's a great person, but I don't know if I could trust him as boyfriend material."

Hannah, who also confirmed that she and Luke have still not had sex, added, "I can't be worried about my man messing with other women all the time. I can't do it."

Things got a bit tense between Hannah and Luke later on in the reunion as they looked back at all of the drama their relationship caused in the house this summer. It looks like these two may have some things to work out in their friendship moving forward as well.

Today is my best friends birthday- everyone thinks he’s perfect and they would be correct. He makes me coffee every morning, plans every date, kisses me every time he leaves a room. He makes sure he always tells me he loves me and that my outfits are better than the next. All these traits make me over look the fact that he wakes up at 5;30 every morning disrupting my sleep, is a neat freak and makes me pick my clothes up off of the floor. Hates being late so he rushes me. Likes being healthy so ice cream every night is frowned upon. I love you so much even when you annoy me. I can’t wait to celebrate your birthday all weekend while pretending it’s still my birthday. 💗

Paige DeSorbo has really come a long way from her days making out with Carl in the pantry. When this season of Summer House kicked off, Paige introduced us to her new boyfriend, Perry Rahbar. And though Perry never came out to the Hamptons to send it with the rest of the Summer House crew, we could tell that things were pretty serious for Paige in the romance department.

Paige confirmed that she and Perry are still together today during the Summer House Season 4 reunion. However, the couple was not in self-quarantine together at the time. "He owns a pizzeria, so he has been delivering pizzas to every hospital in New York City and going in and out of hospitals. And so, to be cautious about getting sick, I came home with my parents," Paige said via video chat from her parents' home in Albany, New York. "He's in the city doing that. And then we will quarantine from May together."

We are happy to report that Paige has reunited with Perry. She posted a photo from his home on Instagram on May 4.

But Paige isn't quite ready for anything more serious than that with Perry. She said during the reunion that she doesn't see them getting engaged "for the foreseeable future." "I'm still only 27, and I can't imagine having kids and getting married right now," Paige said.

Want more Summer House? Catch up on the entire series through the Bravo app.

Get more post-season updates from the Summer House squad, below.

Summer House's Hannah Has a Theory on Jordan