Sign Up for Free to View
Why Is Nene Leakes Bothered by Cynthia Bailey and Kenya Moore’s Friendship? 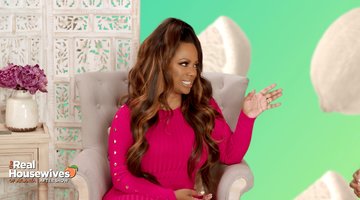 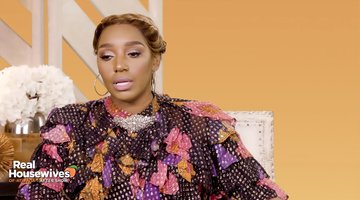 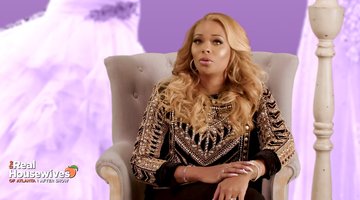 Did we just see the last of Nene Leakes and Cynthia Bailey's friendship in the Season 11 finale of The Real Housewives of Atlanta? Only time — and the upcoming reunion — will tell. But we did get a little more enlightenment on what started all their drama as well as what may be next for this friendship when Cynthia appeared on Strahan and Sara on Monday, April 1 (clip below).

During her appearance on the talk show, Cynthia immediately remarked how Sunday's RHOA Season 11 finale made it "a little rough night last night." "I was a villain," she said to co-host Michael Strahan. "I mean, you've known me for years. Can you imagine, me a villain?"

The RHOA model teased that we're going to need to watch the reunion "to get all the details" on the cause of their rift. However, she noted that she still has love for Nene. "I have done nothing but be a friend and support Nene for years, especially with her going through everything with [husband] Gregg [Leakes], battling cancer," Cynthia said. "I mean, throughout the whole season all you see is love and support, so I had no reason to stop doing that. I love her. It is what it is."

Cynthia then shared her side of the story, explaining why she believes Kenya Moore's surprise appearance at her event seems to have put her friendship with Nene in jeopardy. "It just got kind of tricky because I asked Kenya to come to my event, she said she wasn't coming, and then she showed up. So then it looked like I lied, and then it really looked like I lied when I saw the episode. I was like, 'Really?'" she explained. "Here's the thing, I don't even want to dwell on that. Everyone has friends. It concerns me that it's even an issue. If you're my friend, you're my friend. If I'm having an event, the event should be about me, not about whether you guys get along."

Nene offered up her own theory as to how Kenya ended up at Cynthia's event during The Real Housewives of Atlanta Season 11 After Show, which you can check out, above. She also clarified that it wasn't Kenya's presence at the event that upset her so much, but rather, what Cynthia didn't do after she extended an invitation to the RHOA alum.

"I didn't have a problem with Kenya walking into the event, because at the end of the day, Cynthia can have all the f--king friends in the world. It doesn't matter to me. What I had a problem with was she was using an excuse. She's trying to wiggle her f--king way out of it by saying, 'I invited her, but I didn't know if Kenya was gonna come,'" Nene explained.

"The deal is all you gotta do is pick up the phone and say, 'Nene, just so you know, I invited her.' An invite doesn't mean [you're] coming, but give me a head's up, bitch, because you want a head's up. Don't do some s--t to me that you don't want me to do to you because when I do this s--t to you, my s--t is gonna be so crazy."

Cynthia addressed where her friendship with Nene goes from here during her appearance on Strahan and Sara. "You know, I will always have love for her, and I never say never, like honestly. But it ain't gonna be next week. We need some time," she said. "You know, again, sometimes friendships need a break, and I feel like looking back on everything and knowing the kind of person that I am and the friend that I've been to her, this friendship just isn't healthy for me at this point."

As for Nene, she didn't seem as hopeful about the future of their friendship when she reflected on the RHOA Season 11 finale drama on Twitter while the episode aired. "YOU [DON'T] UNDERSTAND HOW THIS BROKE ME! I will NEVER be ok! NEVER!" she tweeted. "I’m broken! My sisterhood was real REAL!"

Nene and Cynthia will come face-to-face to address their finale drama and so much more during the RHOA Season 11 finale kicking off on Sunday at 8/7c. Watch a preview, below.

Is Cynthia Bailey Insecure?
Life is better as an Insider
Bravo Insider is your VIP pass to never-before-seen content, exclusive giveaways, and so much more!
Sign Up for Free
All Posts About
Cynthia Bailey
Gregg Leakes
Kenya Moore
Nene Leakes
The Real Housewives of Atlanta
Friendship
Relationships
Michael Strahan
Related

Nene Reflects on Her RHOA Finale Drama with Cynthia